“Felix, shall we fight? Shall I fight you?”

Al, the four-year-old with the mostest, had dug out the household collection of wooden swords. He had also requisitioned the dog’s revolver and a kalashnikov-type foam sucker gun. His armoury was impressive.

Felix, my eight year old son, took one look at it all and suggested a game of hide and seek.

Al is besotted with combat right now. If he chooses a car, it’s a car with some hammer attachment which can pulverise things; listen in on his car conversations and the cars are stirring it up prior to some heavy street brawling. A spoon can become a gun in an instant.

The cat looks up from a nap to find herself at sword point. My pasta preparation has been conducted under military surveillance. Because somewhere in his little psyche he’s hard at work, sorting out good and evil.

In the red corner: the baddies. Those heinous no-good types who are out to conquer all. And in the blue corner: the goodies, the defenders of decency, the bastions of beauty. Right now the evil villains have it. In all Al’s role play he’s feeling what it’s like to be really, anarchically violent.

Al’s mummy is scrupulous at home. He watches lovely preschool programmes scheduled by the BBC. His sisters are dolly-lovers, and even Felix prefers these days to create fantastical lego constructions than go conquering. Al’s investigations are all his own.

Does Al sense his mother and his aunt’s uneasiness with the whole shoot-em-up gung ho thing? Or is he just researching, thoroughly, the diktats of his amygdala, the fight-or-flight caveman part of his brain?

Al began to unravel the puzzle for me when he swept into the kitchen with Felix’s wooden sword, like one of my favourite sculptures. He looked for all the world like The Avenger.

Have you ever seen him? A breathtaking sculpture by Ernst Barlach which hurtles, unmoving, through a gallery in the Tate Modern? He is bent forward, intent, at great speed, his great cloak like some wizard’s, furling out behind him. And in his hand, clutched close like a Samurai ready to strike, is a great sword. It is as if this weapon is living, a compatriot in the speed and intensity of the moment. It is all that is seductive about retribution. For me, a female who never experienced the mammoth-slayer’s ire, it is a window onto something.

Barlach made it in mid-life, as the First World War approached. He rejects detail and frippery and centres on the polarised moment just before a strike. The lines are clean. The situation has no ambiguity. It is simple: revenge is his.

He had watched Germany suffer, had watch it descend into poverty and chaos. It was as if, by going to war, a great clean sweep could be made with that great sword and Germany would be avenged. All would be well again. There would be a new artistic age.

He enlisted as an infantry soldier in 1915.

And he saw, at close hand, what weaponry could really do.

It needs no description of the horror and pointless loss of life in the trenches to explain why the man who had created this consummate piece, epitomising play-fighting, came back a confirmed pacifist.

In the years between the wars, the people of the city of Magdeburg asked him to create a glorious memorial to their men who had died in the first world war.

Barlach stirred huge controversy with his creation. The Magdeburg Cenotaph, created in 1929, speaks of the reality of war. A great tombstone rises in the centre: and by it stand three German soldiers: a young recruit, an officer and an old reservist. Beneath the stone are figures: an old mother, mourning her son; Death clad in a German helmet; and there he mourns, Barlach himself, beside Death.

There is much research out there about boys and guns and play-fighting. And I sense that however we try to surpress The Avenger, the dream of him will continue to shadow men and boys alike.

For Barlach, the dream stopped abruptly when the reality set in. The need to learn empirically is one of the greatest tragedies in human nature: second-hand sermons reek of syrup for youngsters with the taste for adventure.

And so, when Al is much older, I shall take him to the Tate Modern, and show him The Avenger: and maybe we could take a trip to Magdeburg to see the Cenotaph.

I am not sure words are the best tool to show how true violence can change a man. 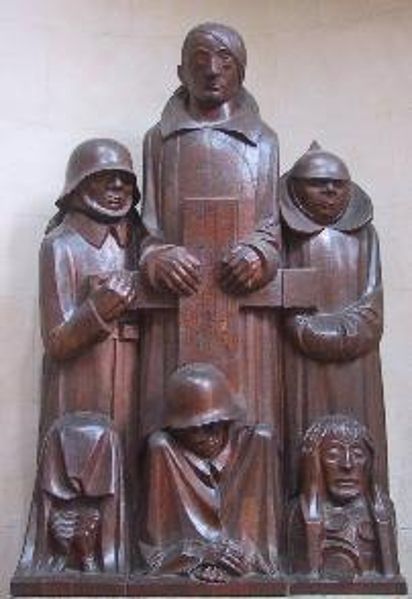 27 thoughts on “Swords of Vengeance”