There are many attractions to be had, here on the South Coast of England, on the last full day of our holiday.

We could tramp off to Marconi’s flagship lighthouse, from whence the first radio broadcast was made.

I could visit Aspinall’s zoo, or take a kayak down the military canal.

Or, I could simply hang about here, waiting for Dave the Dolphin.

It was Dad who spotted the sign on the sea front, urging caution and respect for Dave.

My family and I had shambled past it, oblivious, all week.

Now to some of you reading in hotter and more exotic climes by far than ours, Dave may not seem that big a deal.

It’s possible you all have shoals of porpoises and dolphins cavorting along your coastlines, partying till late, imparting spiritual wholeness to whole boatloads of curious tourists.

Even in Cornwall, every respectable Wild Craggy Bay has its own dolphin.

But we’re just round the corner from Margate, for crying out loud.

This is deckchair-and-pier country, inundated with sticks of rock with kiss-me-quick shot through, homeland of chippies on the seafront, Oh I Do Like To Be Beside the Seasideland.

So one thing I would have to conclude about Dave, is that he is an eccentric.

He is a loner: unusual for bottlenose dolphins, I learn.

Once I knew of Dave’s existence I began ruthlessly to research his stay on the South Coast.

It seems he appeared here in 2006. And became an immediate celebrity.

One of the first discoveries, made by British Divers Marine Life Rescue, who moved in to take care of him, was that he was a she.

There were half-hearted attempts to rename her Davina (oh,please) but she remained, stubbornly, a girl called Dave.

Then the boat trips started. Everyone wanted a piece of Dave’s new-found fame and they stopped at nothing to get it.

Soon small boats were being commandeered to get a good long look at the dolphin who dared to visit the South Coast.

It was only a matter of time, wasn’t it, before someone tried to swim with Dave.

Apparently, under the Wildlife and Countryside Act 1981, there is actually a crime entitled’ Disturbing A Dolphin.’

The two unfortunates who found this out the hard way were found guilty and sentenced to do 120 hours of unaided work in recompense.

I was unable to ascertain what they were set as a task. I’m sure Marine Life Rescue thought of something inventive.

Celebrity had its drawbacks for Dave.

Boat propellers are not good for the health of little dolphins. In August 2007 she had a nasty gash to her dorsal fin. With expert vetinary care, it began to heal.

Now at this point, the experts say, most dolphins generally clear off.

One injury is enough, thankyou very much. There are quieter waters by far than this. I’ll see myself out.

But not Dave. She stayed on, only to lose one third of her tail in another accident in October.

This time it was life threatening. She had to take antibiotics, and we all know how grotty they can make you feel. A girl can only take so much, and the last sighting of Dave was in early November of that year.

The down-to earth people of the South Coast had loved too demonstratively. Their affectionate bear hug was too strong and just plain wrong. At best, Dave wanted out.

And I can find no record of her return. Although the sign looks pristine, and brand new. I can hope.

So we took our final walk along the beach, and we saw no dolphins.

We did see some very clever seagulls, carrying shells up high and dropping them to smash them and gobble up their contents.

But Dave becomes just another of the stories that will colour the towns that hug this stretch of shingle for years to come. 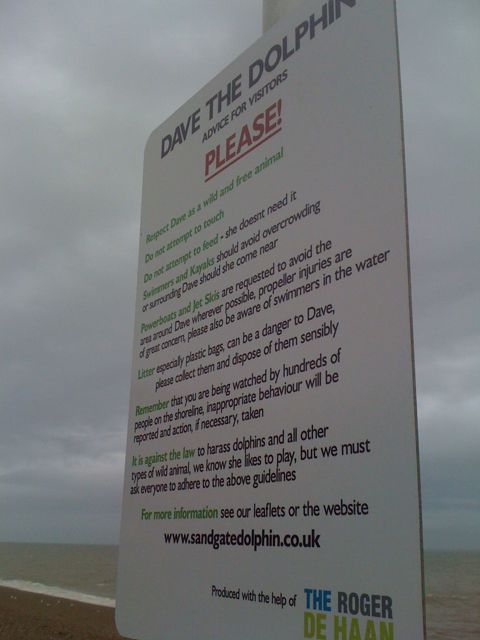 4 thoughts on “Dave the Dolphin”