So the story goes that my friend Julia the midwife has a fascination with all things Middle Eastern.

All year round, as we studied and socialised and ate together during our university years, we would talk of what she would do when the Summer holidays began.

Once she headed out in sandals and a sensible hat with a group of friends to Egypt: for she felt she simply must see those great wonders of the world, the Egyptian antiquities. They travelled to the city of Giza and left the suburbs to see the great pyramids which have caused wonder in Britain for centuries.

As they turned their back on the city and walked, they were filled with a feeling of growing isolation. It was the end of the day, and though this meant it was cooler, it also meant most people had gone back to their hotels to idle with a cocktail.

It was silent and warm and when she stood at the foot of one of the great wonders of the world, she was filled with awe.

But the walk had taken its toll and she and her friends were incredibly thirsty. They had a little water left but it must be conserved for the walk back. Thirst is such an elemental thing in that desiccated place: and Julia could soon think of nothing else but a cool glass of something refreshing. She could no more enjoy the pyramids than a marathon runner could stop and savour the passing architecture.

The need for a long cool drink became so overpowering that she could think of only one thing: to pray for a drink. It was a faint hope: there was not a soul for miles around. Even if one believed in a God, the likelihood of something turning up was infinitesimally small.

Just as she had muttered a few parched words the most incongruous figure rounded the pyramids.

It was a man on a camel: a local, it seemed. And he was shouting something: “Coca cola! Coca cola!”

The group hailed him enthusiastically and their thirst was soon quenched. My friend said Coca cola has never tasted as heavenly as that day, out in the desert, when a solitary man on a camel delivered it from behind a pyramid.

Truth, my good friends, is stranger than fiction. The camel coke salesman was incongruous: out-of-place; absurd.

A thought which struck me today, as I strolled through the great park which surrounds Windsor Castle, gazing up at a set of blatant interlopers whose presence one could not invent. It is too bizarre for words.

We are not a land of exotic birds. We love our sparrows and our crows, and get excited about the scarlet flash of a woodpecker, or the grey-and-peach livery of that treescaling nuthatch.

So when a flock of bright green parakeets settled along the Thames it caused quite a stir.

One hypothesis posits that Jimi Hendrix brought them into the country; another that they escaped from a crate at Heathrow airport; and my favourite, that they were thespian parrots who scarpered from Shepperton Studios in Surrey in 1951, during the making of The African Queen, starring Humphrey Bogart and Katherine Hepburn.

Whatever the reason, they seem here to stay. A government enquiry has been launched. Some worry that the assertive birds might takeover the habitats inhabited by our woodpeckers and nuthatches.

Their numbers- estimated at 30,000 and rapidly expanding – are perplexing the gentle English ornithological community and causing riotous amusement with local punters

Surrey goalie Huw Mellor told the BBC: “I remember very well the first time I saw one, it was during a local football match about four years ago in which I was playing goalkeeper. I got distracted by this flash of green dashing from one tree to another. The opposition took advantage and scored. We ended up losing the game. Damn parrot.. ”

This afternoon we watched a flock of eight or so screeching happily in the sunshine, sitting on the Queen’s trees as if they owned the place.

Incongruous: but getting those little birdie talons under the table. Our friends will only be incongruous for as long as it takes for us to become accustomed to their face.

In 1675, playboy King Charles II was gifted a rather unusual present.

His royal gardener, John Rose, presented him with the first pineapple grown in England.

The event was so noteworthy that it was recorded in a painting by Hendrik Danckerts. Charles and his gardener must have stood very still, presenting the pineapple for hours on end.

This fruit was exotic, absurd, incongruous: and where the King led, the smart set followed. By 1720 the hothouses of the wealthy were devoted to growing the sweetest fruit in its bizarre casing. One gentleman, at Dunmore House near Falkirk, Scotland, even shaped his greenhouse like an enormous pineapple.

Downstairs, as I type, a pineapple sits on the working surface waiting for preparation. It will go into the children’s packed lunch boxes tomorrow, as familiar as the wholemeal bread sandwich which will snuggle up in the Dr Who lunchbox until the middle of the day.

The absurd is only absurd as long as it is unfamiliar.

How long before the Queen has a portrait painted with bright green parakeets? 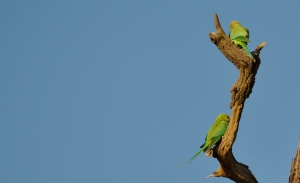