I have always loved Gary Larson’s Far Side cartoons. There’s one I saw once and have never again managed to locate. In it, two dog walkers meet in the park with their charges. Breezily they greet each other and their dogs : “Hi, Rover, Hi there, Socks”, or something to that effect.

The dogs greet each other too. But their greeting is very different. They are saying something like “Hail, Zarkon, slayer of a thousand squirrels”; and “Greetings, Emtor, defender against the cat infidels.”

He had a point. Canine politics are ruthless, moody, dog-eat-dog, and to mans best friends they are deadly serious. A fact made crystal clear when a canine guest arrived to stay at the Shrewsday household for a week.

Our mutt, Macaulay, is a happy-go-lucky biohazard on legs. A mind-boggling cross between a king charles spaniel and a miniature schnauzer, he does all the things small, wiry terriers do: scratch, bark far too much, wind up bigger dogs, eat unpalatable things, and so on.

One thing he has steadfastly refused to do is fetch a ball.

Lately he has gained a partner in crime: a graceful collie called Clover.

It’s time for my sister’s family to have their annual holiday, so Clover came to stay. The two get on. We have two long forest walks a day, every day.

Feeding time needs careful management. Mac has a terrible only-child habit of taking a mouthful of doggie biscuits and then looking up and smiling at us all toothily while he crunches them. Its a good-humoured moment for non-verbal communication exchange, a doggy pause for something close to thought.

Problem is, Clover finishes her own biscuits in a fleeting instant: and then simply moves over during the grin time and polishes off all Mac’s biscuits. Gulpgulpgulp. Just like that.

So I put Mac outside, and Clover inside, each with their bowls. Everyone ate fully, but Mac left some for later.

I walked into the garden to empty some scraps. I turned round from the scraps bin to see a doggie head and shoulders protruding from the door, buried in the bowl parked outside. And it wasn’t Mac.

We’re working on it, and Macaulay will learn eventually. Or lose some eminently expendable pounds.

This afternoon, I took the dogs as usual for a royal romp. Towards the end of the walk Mac disappeared into the tall, whispering grasses from which the tip of his tail could just be seen.

And when he came back, he had a tennis ball firmly fixed in his mouth.

This is the dog who doesn’t touch balls: Oh, no, thanks Guv’nor, not for me, I just chased a squirrel, I just harassed a muntjack. This is Macaulay ‘I don’t do playing’ Shrewsday.

So why was he brandishing the grubby little green sphere?

Now on occasion, he has got sundry items stuck in his mouth. Generally it will be a large baguette he is stealing, or an oversized sausage which got impaled on those incisors.

He is a veteran party bag thief: he stakes out the children when they return from their celebrations. He can tell a party bag at 30 paces, and has been apprehended with a large wedge of cake in his mouth, unable to process it.

So I checked. Was the tennis ball stuck? No: just being held, very firmly, and with iron resolve.

And then I realised. Clover, player of games, wanted the ball. Macaulay was making a doggie point. Its mine, he was saying. I’m the boss round here.

As we sat down to tea he still had the ball between his paws. Clover was lurking – something she does rather well, and slightly unsettlingly – and every time she got close a rumble of doggie thunder could be heard from deep within Macaulay’s little terrier chest.

We’ve taken the ball away, of course. Zarkon’s never wanted one before, and Emtor’s away from home and needs a little pampering. Squirrel slaying, and defending against feline infidels, is a serious, and exhausting, business. As I type, they are both sleeping soundly in their baskets. 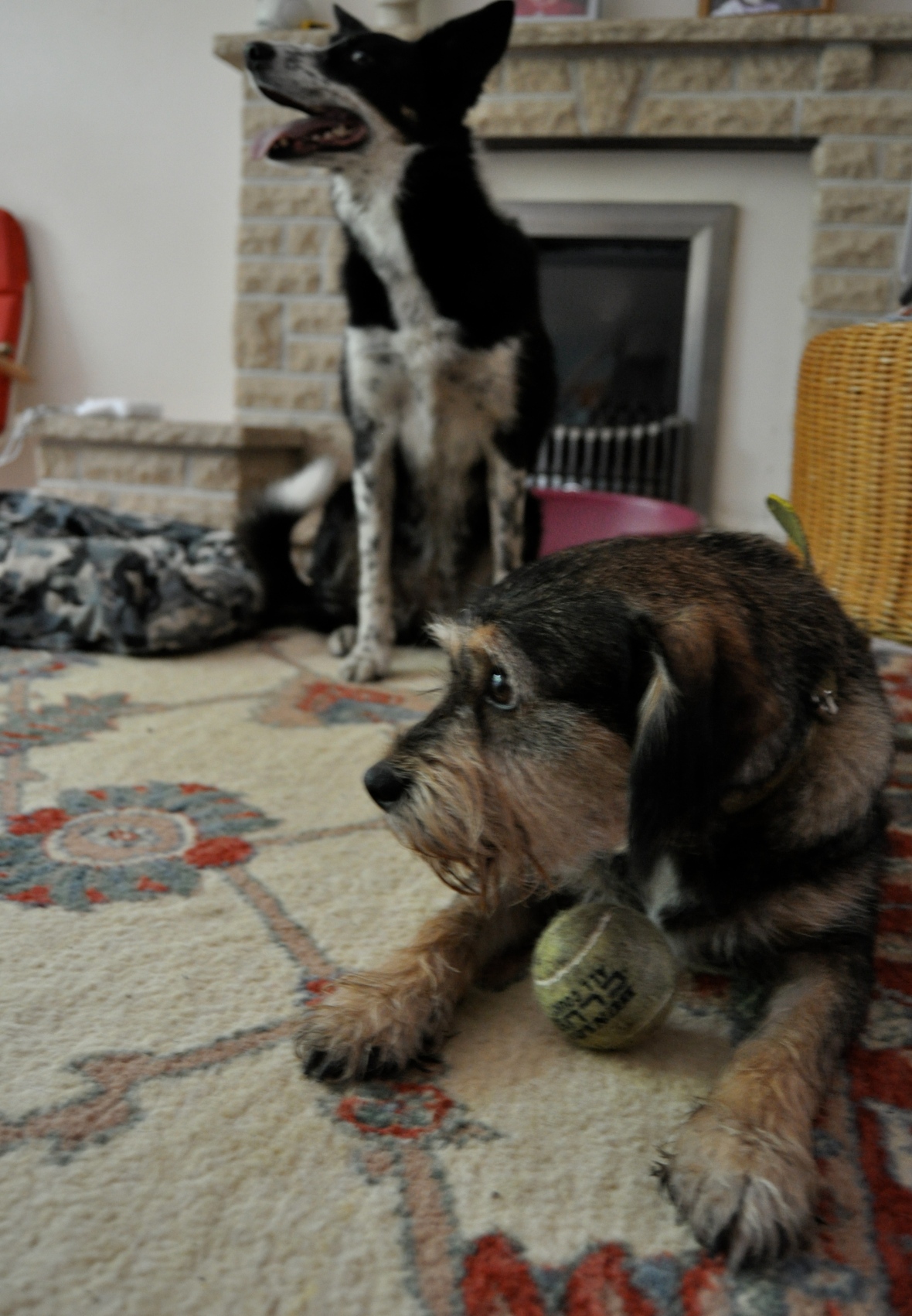