We have a modest addition to our bedroom; unassuming, yet we are thrilled out of all proportion by it.

A brand new bookshelf. A place for books and nik-naks, for Phil’s Tolkien and Iain M Banks, and my burgeoning second-hand Johnsonesque reference library.

In constructing it, Phil created two narrow shelves where I felt one deep one would be better placed. Perhaps we should take one out, I volunteered, and we nodded and resolved to change things presently.

But presently is simply not soon enough, it seems.

For in between our debate this morning and my return to my bedroom after dinner, Bumpy The Elephant had moved in.

Carpets and soft furnishings had been supplied by stealth. I never heard the removal van arrive or depart, never saw anyone actually effect this dramatic change to my coveted new shelf space. But there he was: Felix’s favourite soft toy, reclining on the top floor while his friend Yoshi took the ground floor.

When Felix was asked about the arrival of the small household he was unrepentant: indeed, he was gleeful. For this was not just some household. Oh no: this was Bumpy’s luxury resort hotel.

What is the difference, I asked him, between a hotel and a resort hotel? Ah, said Felix, this has tennis courts and a swimming pool.

The thing is, I simply haven’t the heart to ask him and his small loxodontan friend to move out.

And now it occurs to me that Bumpy may have squatter’s rights: that though I am a Protected Intending Occupier, I have still been pipped to the post because he got there first. Forced entry would be de trop.

No: there Bumpy must stay until I can find him an even better hotel resort, with bigger tennis courts and a deeper, bluer swimming pool.

Ever helpful, the small elephant has probably gone to all this trouble to provide me with a decent metaphor.

For a creature has moved into a set of shelves in my mind, and is occupying it more than perhaps one might predict.

It has a nose like a crocodile, or a broad-snouted fighting dog, and pointy ears. Its limbs are brawny and thick-set and it has the great wide wings of a bat. It has that “Your Country Needs You” ability to follow you with its eyes wherever you go. And it ever so slightly gives one the impression it is coming for you , the moment it has dislodged its foot from the stonework.

I found him during my wanderings in Oxford yesterday, clambouring across the stone lintels high above our heads at Christ Church College. But it is not the first time I have seen him. I first became enamoured of this creature, without noting its source, a month or so ago.

It was on a visit to the ancient city of Winchester, where I managed to visit the cathedral’s lady chapel, a weird and wonderful place filled with the whackiest of ideas.

For on its walls are original friezes commissioned by prior Thomas Silkstede, around 500 years ago.

Eerie, they are, harking back to a time when anything could happen if you mumbled the right hex. They show miracles performed by the Virgin Mary: thieves who mutter Mary’s name and are saved from hanging; a naughty cleric, buried outside the church’s bounds, who is pitied by the Virgin and reburied in consecrated ground, a lily growing out of his mouth as a sign of her approval.And many more.

It is the pious artist, on the eighth panel, who comes in contact with the creature who has moved onto the shelves in my mind.The story – based on the Cantigas de Santa Maria of someone called Alphonso the Wise – tells of an artist who was charged with painting a frieze of the Virgin,which included the devil.

The artist chose to depict him with an ugly face: whereupon the devil, a vain fellow, became irked. He grabbed the scaffolding on which the artist was standing, and he shook it hard to break the poor fellow’s neck.

The scaffolding fell: but the Virgin held the artist, suspended in mid air, it is said, until help came.

And there is my creature, in the wall painting, shaking the scaffolding for all its might.

While Bumpy is an affable’ harmless tenant, I’m not sure how I feel about having the Devil to stay.

And so now I have a choice. I can evict this creature which, lets face it, belongs to the folklore of another time: or I can go seek more depictions of him, and give him a foothold in the 21st century.

Pop quiz: what would you do? 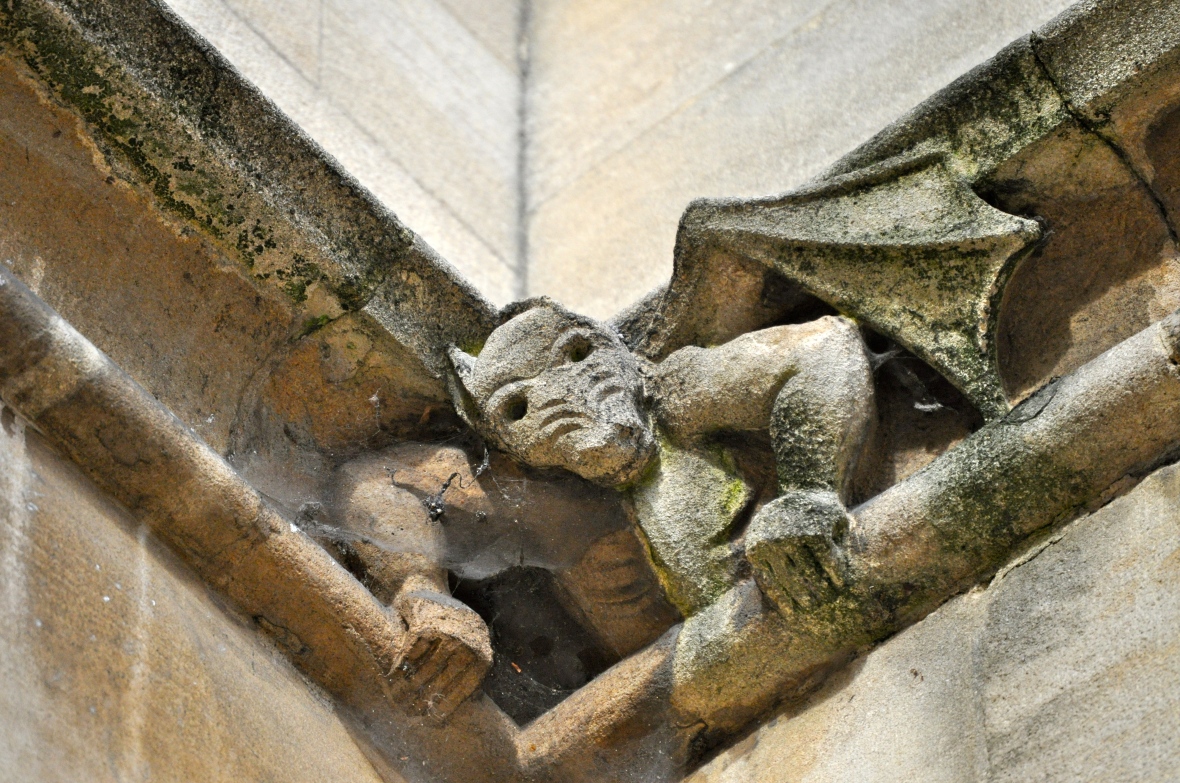