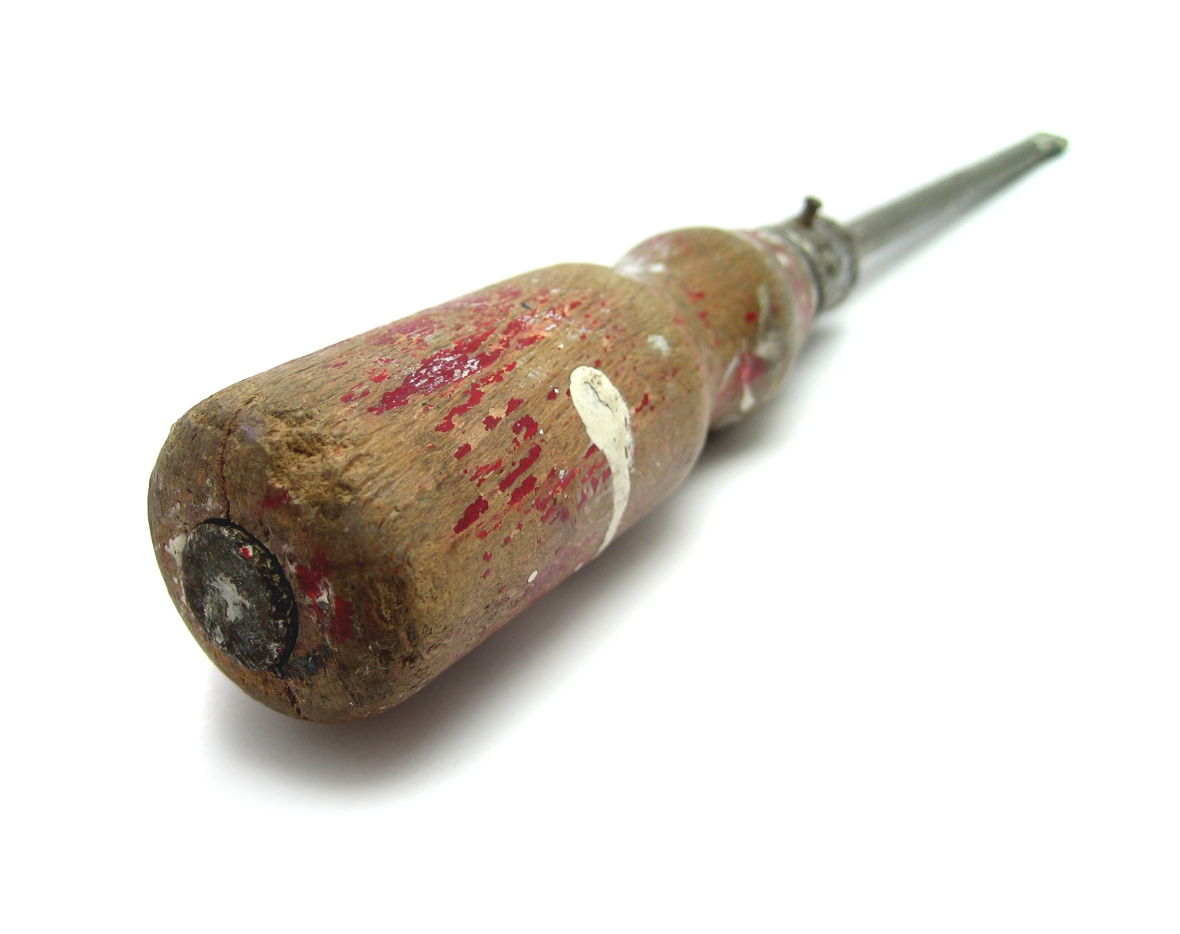 We are a little too used, here at Shrewsday Mansions, at finding ourselves the wrong side of a locked door. A repost today recalling a three-floor Houdini extravaganza of an escape attempt, masterminded by the ever resourceful Phil…

Every job has the perfect tool.

Which is why some jobs simply don’t get done in our house.

The biggest screwdriver came in extremely handy a couple of years ago, when Phil locked himself and the children into the top floor of our house.

The people previously living in our illustrious mansion were a bit security sensitive, and every door in the house seemed to have a self-closing lock.

Once, back in the mists of time, there were keys, but they had long ago excused themselves, and gone on key vacation.

It was bedtime, and Phil was reading a story to the kids when he heard an ominous slam.

I was vacuuming downstairs, and switched the Hoover off to hear faint but unmistakable bawling coming from above.

Phil was locked in, he told me in a tetchy conference through a closed door. I needed to find something to force the lock.

Force the lock? I needed my iPhone translation programme immediately. Or a Babel Fish.

Phil began to realise that the key to attaining a miracle, and getting himself out with some form of help from me, was to get me to find The Perfect Tool.

Once it had been secured, we must transport it from me, in the garden on the ground floor, to him, marooned on the top floor of our very tall house, through a velux attic window.

We hit almost immediately on The Big Screwdriver as the tool of choice. I went to the Man Drawer, and there it lay, waiting for its big moment. I took a deep breath and picked it up.

The next challenge was the garden-to-attic-window stage. In a post-modernist parody of Romeo and Juliet, Phil egged me on from the highest aperture in the house.

He lowered a weighted stretch of Granny Norma’s famous bright red wool into the garden. I seem to remember a toy car did the trick, holding the wool down as it dangled towards me in the growing gloom.

I obediently tied the screwdriver onto it and it rose into the air, mounting the odd loud, cracking assault on a patio window here, a pane looking out from the bedroom there, until it completed its ascent.

It took less than a minute for the thug in Phil to manhandle his way out.

Writers still have tools too.

I have a battered old pocket Oxford dictionary, long out of date. I found it in an Oxfam shop for £1.99, and it is the fifth edition published in 1967. I love it because it is hardback, and because it has the fusty air of an Eton schoolmaster: and finally, because of the sound the pages make when they fall open. A sort of ‘flupp’.

I love the tweedy definitions of yesteryear, from my old Oxford. It says a tool is something designed to help or enable the hand to use force.

It talks about dressing stone with chisels, and impressing designs on leather and book covers with skivers and bevelers. This is a craftsman’s world, where each device helps to add impact in its specialised way.

The tools writers use are designed to have impact too. Like other craftsmen, they have their favourite implements with which to do so.

One of my favourite tools is allegory: a narrative describing one subject- under the guise of another.

Something disguised as something else.

So John Bunyan’s seventeenth century Christian is really just everyman, and his journey to the celestial city is the path to heaven.

And George Orwell’s Animal Farm is in fact Stalinist Russia, with all its flaws.

My favourite allegory of all time is a little known land called the land of Bism. You may have come across it: it is tucked away in CS Lewis’s Chronicles of Narnia, in The Silver Chair.

A prince has been imprisoned under a spell in an underground kingdom, manned by small, pale drones and ruled by a glittering emerald Queen.

The enchantment is broken, the queen deposed, and the kingdom, built in tunnels underground, begins to crumble.

Great fiery chasms open up in the floor. And to the amazement of the prince and his rescuers, the little drones begin to cheer and jump in.

It appears that they are natives of a land beneath the mines, a blazing kingdom of fire. In this world, diamonds are living. They are not dead things mined from the earth’s crust. Instead they grow on trees, vibrant and alive.

This allegory can be read a little differently for each reader- that is its joy.

But I try not to settle for dead diamonds any more.

33 thoughts on “The Perfect Tool”