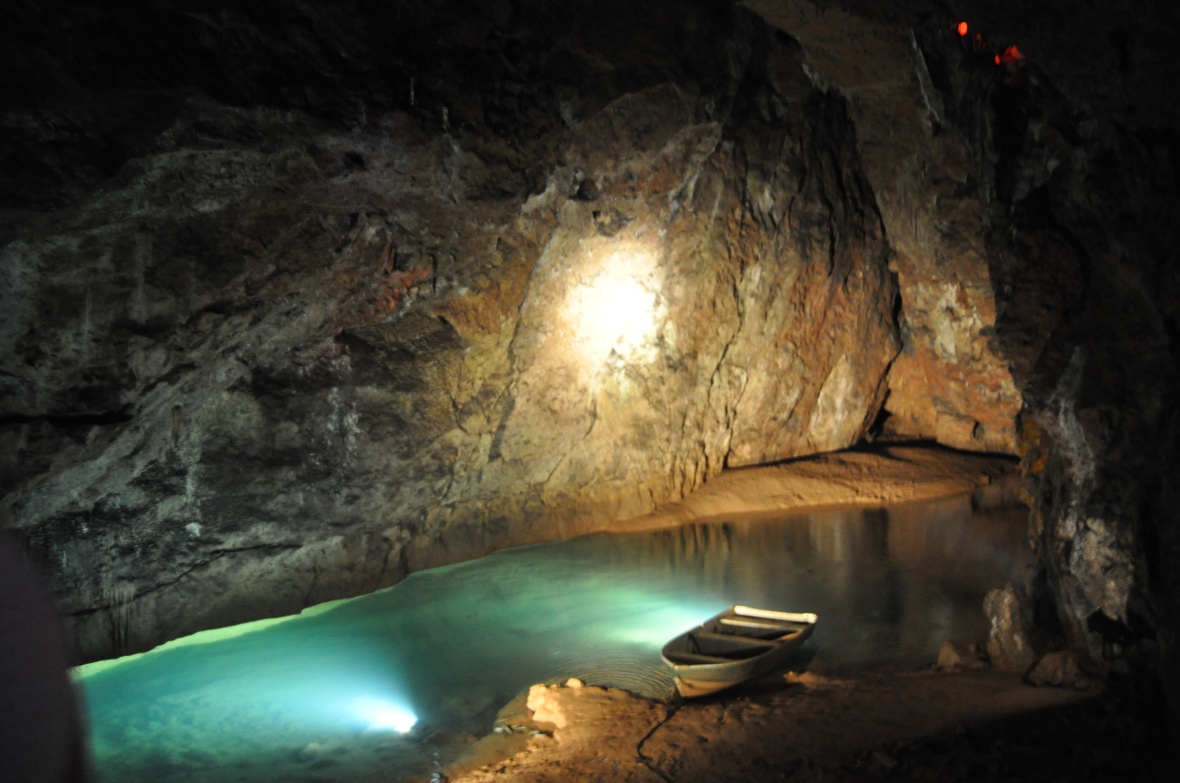 It does do, when you have charged a wallet-throbbing amount of money for a tourist attraction entrance fee, to let your victims out at the end.

Wookey Hole Caves, nestled in Somerset, are spectacular. British cave-diving began here. A Romano-British cemetery nestles in the fourth chamber. It was our treat on the long drive home from Cornwall.

But a survey of the entrance tariff was enough to make one blanche. I gulped. No turning back now.

Call me old-fashioned, but geological wonders demand, do they not, a certain subterranean theme to the attraction?

Undeterred by convention, it was pirate-themed crazy golf which greeted us as we ambled to the restaurant to pick up sandwiches. Lifesize Jack-Sparrow-alikes loomed over ships and tiny greens with holes in them, and all for only £3 a go. Tourists were happily indulging in this top attraction. I scowled and stomped past.

Heading underground,we could hear the terrified toddlers wailing from the door. We could not hear the guide over their little voices, though. Clearly the Mums were not for turning, though. “It’s all right”, one of them said cheerily, “I’ll bribe him with food.”

The caves were lit and staged with all the aplomb of a fairground attraction. To help our feeble imaginations there were props: a pile of stage-bones to represent the unfortunate old woman who lived in the caves with her two goats; a set of bang-up-to-date cave paintings painted, if my guide was to be believed, by a chap in Bristol a couple of years ago.

Still, those West Country tourism magnates must give us our money’s worth. All was dark in a huge cavern we accessed by a narrow bridge and walkway, until the guide triumphantly slapped a big red button.His charges jumped violently. A robustly distorted  version of Rule Britannia began blaring out and lights flooded the 100-foot-high cavern. The guide whistled cheerily along.

We got Rule Britannia twice: once for the people at the back.

Except that he didn’t.

We were caught in a labrynth of questionable West Country tourism. We passed a plastic gorilla as tall as a house and several enormous dinosaurs. And a family of four cavepeople without heads for joke-photo purposes. We trailed past an unsettling fairground museum. Where, oh where was the exit?

There was a soft play area where toddlers rid themselves of their cave terror by running up and down padded playstuff. We negotiated a hall of mirrors by following everyone else, because it said it was the only way out.

There there were the slot machines. Vast acres of them, it seemed, vintage and modern, presented with little chronology but a canny knowledge that 90 per cent of the population would lose more of their hard-earned cash here.

I had had enough.

I walked up to a money changing booth. “I need to get out,” I announced, with a flustered face which thinly veiled some as yet undefined threat. “Now.”

I will say this: the attendants were flawlessly polite.

They had hidden the exit, of course, using that old showman’s chestnut, misdirection. The exit was tucked away from the main path, so most of us wandered off on another path.

We got out and fled without complaint, as if this labrynth might draw you back in given half a chance.

Don’t look back, they said to Orpheus once long ago.