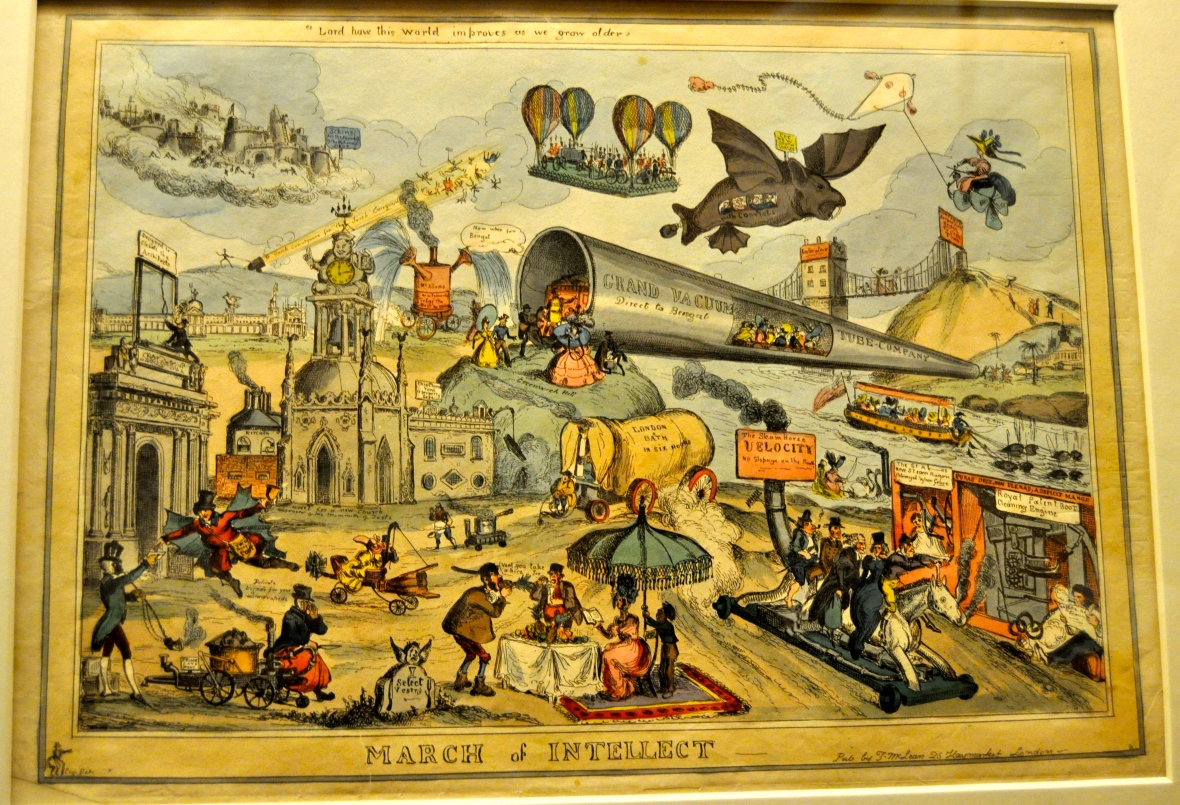 I have a photograph of a cartoon.

It is called ‘The March Of Intellect’.

It is bizarre, painted in 1829 at the dawn of the steam age, when anything seemed possible. William Heath designs outrageous transport contraptions: a Grand Vacuum Company which takes hordes direct from London to Bengal; people flying using platforms borne by four hot air balloons, one at each corner; and the iron horse really is an iron horse on wheels.

In the top left hand corner is a castle, built securely on white fluffy clouds. It is signposted: “scheme for repaying the national debt.”

We all dream. But which dreams are realistic?

There are plenty of folk tales on the subject. They have a type number: 1430. Castles in the air. Variations on the theme of daydreaming.

Here’s one, originally written in Sanscrit.

Once upon a time, there was a poor man who lived next to a wealthy merchant. And the merchant, a jovial compassionate man, took a huge flask of oil one day, and handed it to the poor man as a gift.

Whereupon the man began to dream.

“How much oil is in that bottle, I wonder….” he mused as he ate his meagre meal that evening. “I bet if I sold that I could buy five sheep.”

And he instantly sat taller, already the notional owner of livestock. The dream became bigger and more expansive: lambs, a flock, money to get married…”

His chest puffed up. “And then I would have a son, and what a fine son he would be! A tall, strong boy to do my bidding! ”

He checked himself. What if the son were disobedient?

“Why then,  ” he cried, raising his stick, “I should punish him thus!”

But his stick came down, not on his unruly offspring, but on the bottle of oil. It smashed, and all the oil was lost.

I like another variation, though: an Indian story called The Daydreamer.

A servant was daydreaming his way to market. He was carrying jars of oil on his head to sell his master’s wares.

What, he dreamt, shall I do when I get paid?

With the oil I could buy chickens, and they will multiply and lay eggs, and surely I must make enough money to buy goats; and later, as my goats multiply I will sell them and buy cows, and buffaloes; finally I shall have enough for farmland, and a wife.

And with my beautiful wife, I will have children, and every day I will hurry back from the hot golden fields to see them. And my wife will meet me with cool, clear water. And I will rest.

And finally it will be time for dinner and the children will run to me, and shout: “Daddy, hurry up and wash, it is time for dinner!” and I will shake my head and say No, no, not yet!”

As he shook his head vigorously to his non-existent children, the oil fell from his head to the ground.

Right, said his master, that’s two rupees for the oil, and compensation aside for the pots.

But the servant was adamant. he had lost far more than that himself. And he explained all his dreams. I lost a wife and a family an a farm, he said.

The oil merchant listened, mouth agape. There was a silence.

And then he roared with laughter.

“Having scrutinised the accounts, ” he said, “I find our losses are equal.” And they both went on their way, laughing.

Same theme, different outcomes. One leaves the bottle and the dreams in shards at a man’s feet.

The other accords real weight and gravitas to castles in the air.

Which one is the correct variation?

Written in response to Side View’s weekend theme: Variations on a theme. you can find details here

37 thoughts on “Variations on a Theme”