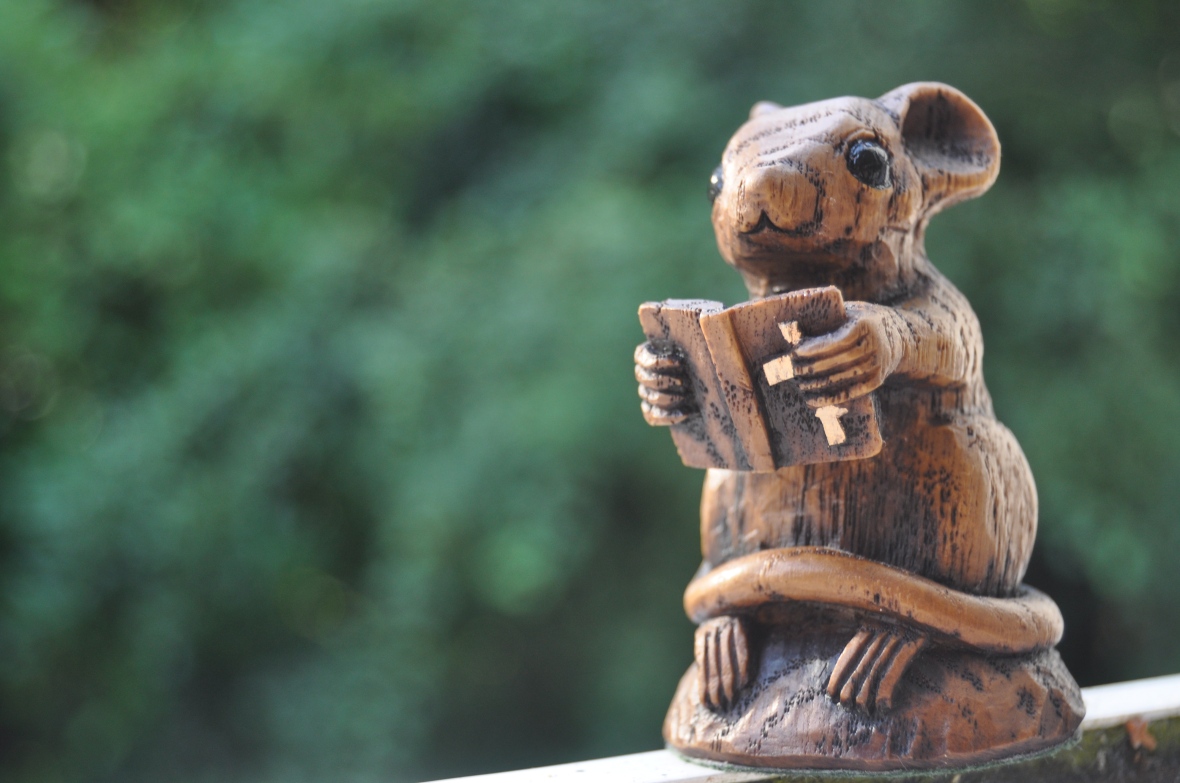 Maddie flew in from the garden, her eyes shining.

“I’ve found a mouse!” she exclaimed. “I’m feeding it! It’s got bright black beady eyes… it’s already had a tiny piece of cheese and I’m getting some currants. It just walks out and takes it and then scurrries back into its hole!”

I never saw the mouse. Maddie ministered to it all afternoon, by which time it must have felt, and possibly looked, like Henry VIII after a banquet.

But I walked out about teatime to find someone else ministering to the mouse.  There was an ample, baggy ginger furry behind swaying imperceptibly; rather like a golfer lining up his shot.

The dog was dispatched to rid the garden of the vanquisher of my daughter’s dreams.

Feeding the mouse has always been a dilemma. I can remember staying in an old house in the South of France where a mouse lived in the larder. As we drove away after a week’s holiday three out of the four members of the group admitted to feeding le petit souris.

But the cat is never far away. Take a look at the mediaeval bestiaries, those gorgeously illustrated records of animals laid down by people in the twelfth and thirteenth centuries. They are full of images of cats and mice; and those hinge down seats clergymen sit on during services, the misericord? A recurring theme is the cat with the mouse in paw.

Exeter Cathedral’s ancient astronomical clock is splendid indeed: yet mice were a part of its history, for they would scurry into the clock tower and nibble the ropes which held its weights.

So a cathedral cat was employed, and a cat-flap cut into the door to the clock tower. A mediaeval cat flap which remains today.

I have heard of a tradition that a small wooden figure of a mouse is hidden somewhere within the sanctuary of any church.

The net reveals little about the custom.

When I left work a few weeks ago, my friend Jan, librarian and overworked sub-editor of this blog, handed me a small package.

It was a small wooden mouse. It was taken from a carving by a man called Nick Hunter who specialises in reproducing mediaeval carvings. The little mouse is not mediaeval,however: he is based on the saying “as poor as a church mouse.” The same saying inspired British carver Robert Thompson to include a trademark lone mouse on his furniture in the first half of the 20th century.

I hied me to the nearest mediaeval bestiary  to nibble on the ropes of the puzzle of the lone liturgical mouse.

The mouse, said ancient sources, was born of the soil – hummus – hence its Latin name: Mus.

It is a small animal, the ancients reasoned, whose liver gets larger at the time of the full moon. Pliny the Elder observes they gnaw at iron, and in gold mines they have been observed to gnaw that, so that when you cut them open there is gold in their stomachs.White mice are a good omen: and mice feed their old with uncommon devotion and affection.

They conceive by licking, or by eating salt; and the mice in Egypt walk on two feet, Pliny asserts, as indeed do Alpine mice.

And in some mediaeval imagery: for example images of Gertrude of Nivelles, (626-659) an abbess-turned-saint on whose robes mice nibble – the mouse is said to represent the very human soul.

Thus cat-and-mouse imagery prevalent in so many churches represents the devil’s hunt for the soul. And a mouse on its own?

Could it be an attempt to place the very essence of the human spirit into a towering masterpiece of stone and wood?