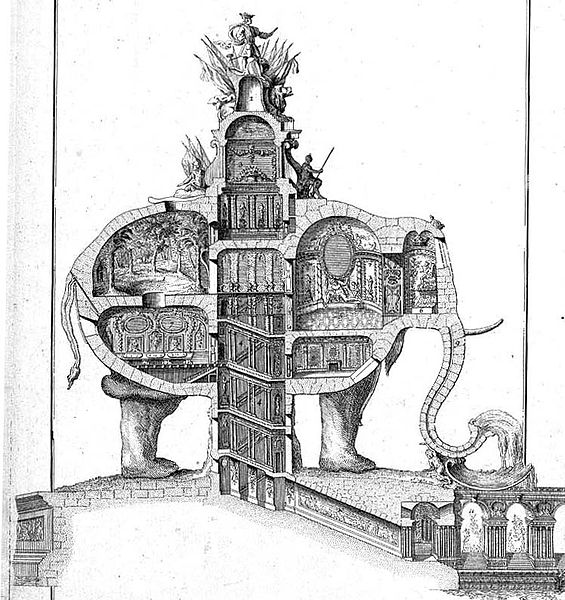 It is said that the kings of Siam had a subtle way of ruining those who disappointed them.

They would gift them with a white elephant.

A lavish and expensive present, the elephant cost the earth to keep. For the Buddha’s mother dreamt a white elephant presented her with a lotus flower before her son was born, and white elephants are deemed by the Siamese – those in modern-day Thailand –  irrevocably, expensively sacred. A keeper of a white elephant must feed it special food, and make special arrangements for those who wanted to worship it.

Very soon, there would be no money left for making a nuisance of oneself at court. A white elephant was veiled ruin for its recipient.

The term white elephant has become synonymous with an expensive possession which has become a burden.

Like the one we pass every time we pull into Waterloo Station on our way somewhere or other in the metropolis.

Waterloo International Station attracted acclaim on its opening, in November 1994. My husband was part of the inaugural London to Paris run –  a press jolly – and marvelled at the space-age glass structure, later accorded the Royal Institute of British Architects Building of the Year award. Nicholas Grimshaw & Partners were inspired not by an elephant: but by a pangolin.

Yes: according to the Victoria and Albert Museum, the scaly anteater can take the credit for this futuristic creation which was, for a short time, the gateway to Europe. The endearing nocturnal mammal has keratin scales which overlap each other to protect its body. Its very name comes from pengguling –  the Malay word for ‘curl up’.

Waterloo’s terminal had to meet unique challenges, hosting high speed trains at the cusp of a new millennium: to be flexible, to be able to bend upwards, and downwards, and sideways.

So it was constructed of glass panels: squares fixed only at their upper edges. The other three sides were free to move over the other panels , almost like a living pangolin’s surface.

Ingenious: but defunct. For a high speed rail link connecting efficiently to St Pancras rendered Waterloo International surplus to requirements, and the four platforms which briefly became so glamorous now stand without a single arrival or departure, while different parties squabble endlessly about who pays for their conversion.

Perhaps the planners should have given the plans for the London Pangolin a  little more thought before giving the plans a go-ahead.

The article about Charles Ribart in Wikipedia is a stub.

It should be a new form of ignominious insult, the stub: too unimportant to attract the attention of any volunteer to write his entry, there is little information remaining about Charles and his work.

Save for one glorious set of blueprints.

The Arc De Triomphe is such a four-square solid declaration of French might it is hard to imagine anything else standing in its place.

But had the planners who surveyed Waterloo International had a hand, centuries earlier in 1758, in looking at Charles Ribart’s work,  it is just possible you might have seen a vast elephant straddling the Champs Élysées.

A building on three levels, his elephant would be accessed via a spiral staircase in its underbelly.

Inside would be a ballroom, bathrooms and other function rooms. Much of the furniture was designed to fold up against the wall and air conditioning was built into the great colosus’s trunk.

But the good planners of Paris were not of the same ilk as our twentieth century London ones. They took one look at the elephant, and uttered a perfunctory ‘Non’.

And so it only remains to ask: are we glad we have a triumphal arch, and not a hatstand elephantine ballroom, steampunk before its time?