There’s a powerful phrase in the English language: ‘What If?”

What if Harold had won at Hastings; if Napoleon had not turned his attention to the Russian front? What if someone had appreciated Adolf Hitler’s art before he began to cast around for more political pursuits?

On one day, in one instant, something happened to divert reality so that Harold ended up with that fateful arrow, and Napoleon ended his days being poisoned by the arsenic in his wallpaper.

What happened , happened. It is set in stone. Yet this does not stop us doodling whimsically in our literature.

The great science fiction writers of the late nineteenth century have caused a sort of doubleback loop, a strange junction in our ‘what if?’ fantasies. Jules Verne, HG Wells, and the earlier fantasy, Mary Shelley’s Frankenstein: they all took the newest technology, and then grafted fantasy onto its iron limbs. Their very novels were veritable monsters bolted together so expertly that a new, eerie life coursed through them, not so much like blood, but more akin to an electric current.

What if those advances had never been made?

In the 1980s there rose up a genre from its dais, sewn together from pieces as diverse as the gothic novel, science fiction and horror. And it was a sci-fi author, KW Jeter, who named it first: steampunk.

Steampunk brings the ‘what if’ paradigm to all the diverse inventions of what we in England call the Victorian era. The engineers and their pistons are taken to territory they never trod, steam creations become outrageously lavish. The clothes are all boot-buttons and bodices, the buildings towering creations of glass and iron, those glorious materials tamed by our 19th century forebears.

I wandered past the Nash conservatory, a classical early Victorian conservatory. Gorgeous, filled with light: but there was nothing wayward or slightly naughty about this building. I strolled on. 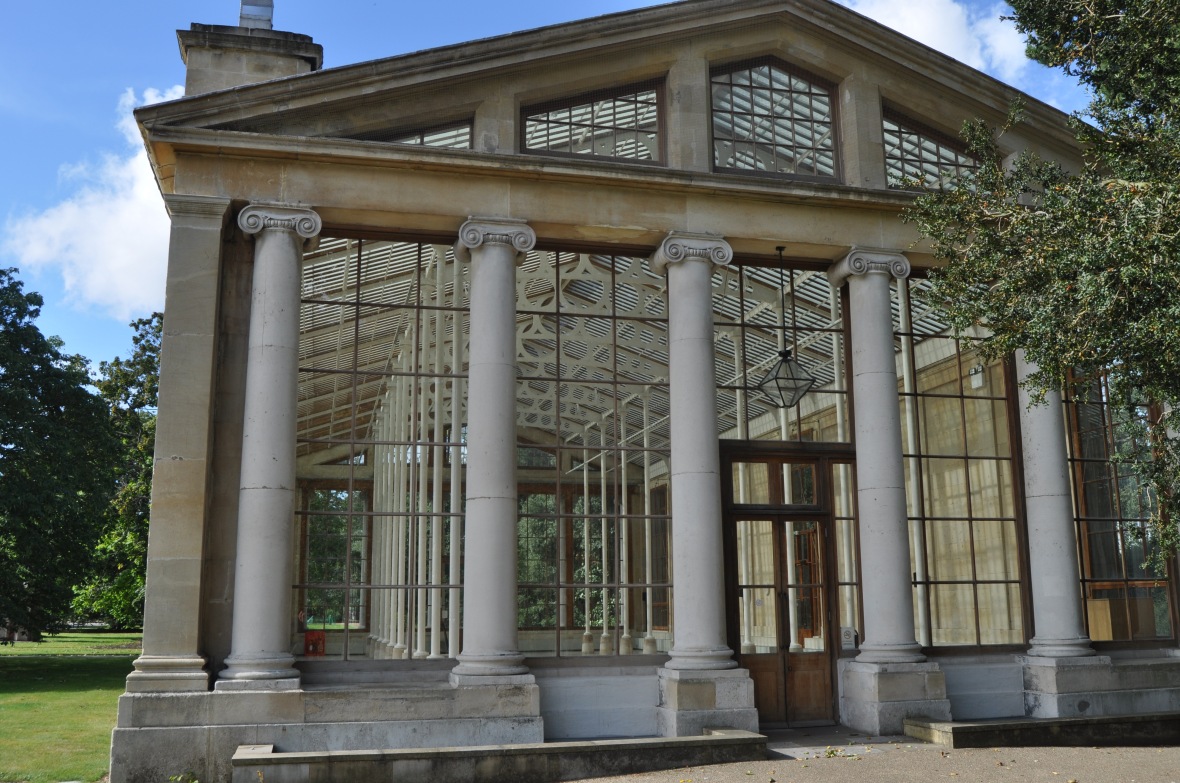 After a while I hit on the Princess of Wales conservatory. It is home to ten climate zones, but opened in 1982 it has more of the Valley Forge from Silent Running about it. Sci-fi, white and seventies, but with none of that earthy iron ornate tartiness which draws one inexorably into the steampunk lair.

And then, I saw her.

The Palm House: a steampunk author’s dream. Built by the satisfyingly named Decimus Burton, the glass and iron cathedral design borrowed heavily from shipbuilding technology of the time. The Palm House is said to be modelled on the structure of an upturned ship’s hull.

To see her is to adore her. For she combines utilitarian requirements – the housing of rare and exotic rain forest species, and the maintenance of its environment –  with whimsical design wrought in iron. She is everything that is ‘what if?’. Once upon a time, someone asked the question and the magnificent structure- the foremost glass and iron structure in the world – was born.

If you ever get the chance: walk through her tall imposing doors and climb the spiral staircase to walk above the plants. For here is seductive geometry to rival the airship. It is infinitely pleasing to the eye, all green-tinted light and white filigree: but iron-strong.

It is the beginning of a steampunk novel if ever I spied one.

68 thoughts on “The Steampunk Steam House”