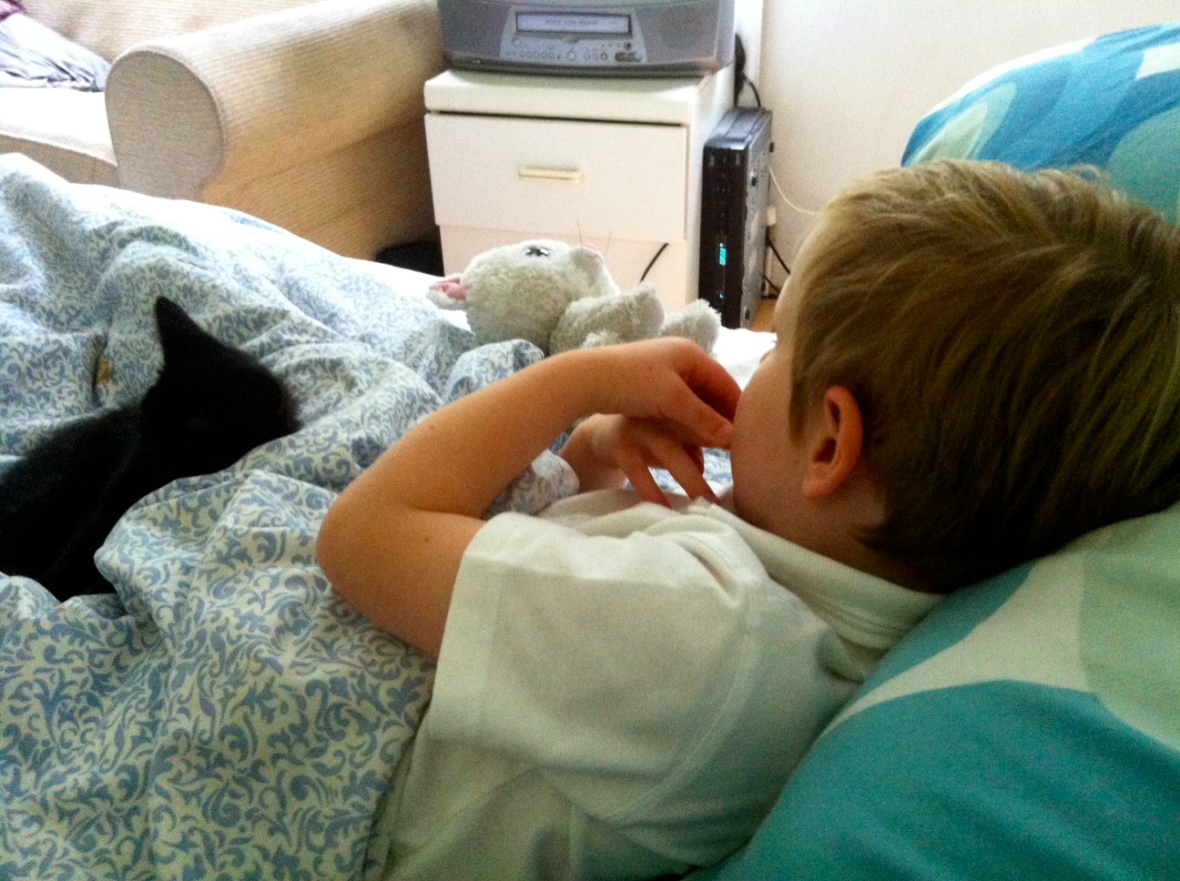 My five-year-old nephew would trail in with all the other pint-size Reception Class to the big resounding school hall, grey school trousers bagging like Charlie Chaplin, and unzip his packed lunch box, and munch his lunch.

But first, he needed a puff. He was a bit wheezy: and Al uses his asthma inhaler a little at times like these.

In the UK, Mums and aunts do that stuff, not school staff. So I arrived for the solemn Puff Administration Ceremony, and asked the school secretary to have Al brought to its altar.

Al beamed beatifically when he saw me. Auntie Kate: how capital. And in the middle of a school day, as well. Things were looking up.

I brandished the inhaler and prepared for the ritual: but Al’s PA was standing nearby and she clearly had an agenda.

“He’s not been totally well this morning,” she opened, in a capsule British understatement.

I eyed her warily. Not well, as in he’s had a runny nose? Or, not well as in, on his last legs?

It was the latter.

“He could do,” she finished musingly, gazing purposefully into the distance,”with going home, really.”

I took a last longing glance at my plans for a haircut. Today Al would need a convalescent afternoon.

I picked up his coat.

But Al did not want to put his coat on.

He made his feelings clear: at first, vocally; and then, by squirming out of every sleeve I managed to slip onto his arm. It was like trying to dress an eel in a dinner-jacket.

But I had a master plan.

“Well, if you don’t wear your coat,” I informed Al, “we won’t be able to go and tuck up in Auntie Kate’s big bed and watch films and play with Bond the kitten.”

The coat unaccountably materialised on Al. It was a miracle. He summoned his most pathetic voice, suffused with pathos.

“Will you carry me?”

I sighed. “Of course I will carry you.” I balanced book bag and packed lunch box somewhere I do not now recall, picked a wheezy tired little bundle up, and strode out of school and down the road.

His packed lunch was eaten at the table. If Al eats lunch anywhere else, it ends up everywhere else. Al believes passionately that lunch is not just sustenance, but entertainment and decoration. It is best, even on poorly days, to let the table take the brunt of his experimentation.

And then we padded upstairs to the fresh delphty blue-and white duvet next to the television. And lo, the crazy-eyed kitten materialised.

But today Al’s job was to lie down and be still.

I was not hopeful about this with Bond around. The small black kitten is already an over exuberant influence. And Al’s ability to squirm and bounce is virtually infinite.

But my nephew lay back with his head on the pillow and watched Bee Movie, and Bond crept onto his lap, to the little boy’s endless delight. And the two of them convalesced together.

And so, with the help of a box of cars, some small plastic power rangers and a black kitten, we managed to effect a serviceable convalescence. Al actually stayed in bed, a feat virtually unknown for him, and passed the time in wheezy, bleary contentment.

I think he will be ready for school again tomorrow.

58 thoughts on “An Afternoon Convalescing”