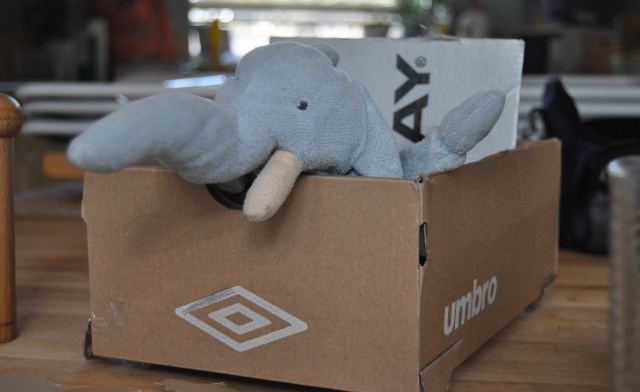 A repost:times gone by, when my son’s favourite toy used to sprout legs and walk to unspecified locations to fox us all.  Between me, you and the gatepost, Bumpy is still very much in evidence today.

His lifetime long-nosed companion, Bumpy the Elephant, he who graced his cot and marches with him through life: he has once again gone Absent Without Leave.

This is happening nightly.

A few nights ago I spent many fruitless minutes rooting under sofas, behind cabinets and in toyboxes to no avail. He finally materialised, stuffed by the paper-cutter next to the telly in the middle sitting room.

Once we feared we had lost him irrevocably. But no: he turned up, the bizarre product of a Narnian game the children had been playing in one of our cavernous wardrobes. Six weeks after his mysterious disappearance, there we found him, in among the camphor balls and well-pressed suits, looking for a lamp-post that wasn’t there.

Bumpy has disappeared on more occasions than my slightly challenged long-term memory can keep track of. The tension when he is missing is taut, relief when we find him once again palpable. Seven-year-old little boys need their comfort toys.

Tonight, Felix walked in just before bedtime and announced that Bumpy was missing.

An involuntary groan escaped my lips.”Felix!” I said, “Not again?”

His face fell and he desperately attempted to bluster, but I could tell he was really quite upset.  I followed his headlong dramatic Bumpyless dash upstairs and sat talking to the small miserable mountain beneath the duvet for some minutes.

His words were revealing.

“I put him somewhere really carefully every time!,” he protested. “And then I think somebody moves him so that I can’t find him!”

While I did not lecture my son  I could perceive, loud and clear, something underlying his words: a way of thinking which I keep close to my heart, and tucked in my purse, and at the front of my mind most of the time.

It is called ‘Locus of Control’.

Rotter by name, but not by nature: Julian Rotter was born in 1916 and followed a classic academic’s path with a small spell advising the US army, finally settling at the University of Connecticut.

From 1954 onwards a stream of ground breaking theory began to emerge from Rotter’s research. It’s complicated: let us see if I can define it accurately without risking the ire of a thousand psychologists.

And I may be one of those people who think stuff happens because events outside my control make it so: I blame other people, fate, and other stories.

Alternatively, I may be one of those souls who believes what I do has a direct bearing on the stuff that happens.

So: Felix’s locus of control – a sort of fulcrum, his perception of who, or what, steers the events in his life – may be  external. Felix may posit (if seven-year olds can posit) that his elephant is being controlled by contraband elephant smugglers, a parental conspiracy or The Borrowers.

Or, that locus is bang smack inside Felix. He thinks: “I must have put Bumpy somewhere. If I track back for long enough I will find him.”

I watch my own locus of control like a hawk. I can be found stomping round the kitchen blaming Phil for the missing marmalade: but in most cases I was the culprit who stashed it in an original place.

Listen. Just today. And I will wager you a cuddly elephant to a jar of marmalade that you hear that locus of control in action.

My husband, whose locus is generally internal, has just rooted tirelessly. He is correct in assuming his actions have a direct effect on events around him. He has just found Bumpy wedged behind the toilet.

36 thoughts on “Bumpy The Elephant”