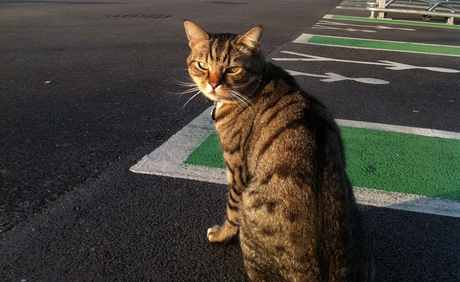 Our kitten is swiftly turning into a Catton.

I know because I lifted to eject him from the porch during his hourly attempted jailbreak and he was heavy. I’m hoping this is pure muscle. He looks innocently slim and sinewy.

These days when he goes to the porch it is not to sit and gaze fixedly outside, but to climb on the handlebars of the bikes with intent. We believe he really means to ride them. We never fear his dash out of the door; we just go to the bikes and there he is, Kitty Wiggins without the cycle helmet and skin-tight shorts.

Against all the odds, the dog and the cat are firm friends. After years of living with a cat who was the heart of darkness, a tortoiseshell comprised of haughty rage, Macaulay the affable terrier has been gifted a blokey cat who shares all his interests: stealing food, play-fighting, invading sofas, companionable smelly cushions.

And as a bonus, the cat produces the kind of smells which, to a terrier, are the equivalent of Chanel.

Symbiotic? I’ll say so. Clive Bond discovered where the plastic individual food pouches were kept, and defied his lack of opposable thumbs by securing one and mauling the packet before throwing it to the floor so the dog could act as a Heavy. It was but a leap, skip and a sniff to join Macaulay at their contraband meal. Clive got most: the dog loves licking the wrappers.

He’s the one that gets caught, of course. The cat looks so innocent that only our Clouseau detective work divined Clive’s ability to extricate packets from drawers.

And so Clive Bond’s eccentricity is developing nicely, under the delighted gaze of his equally eccentric owners.

He would have a long way to go to become as eccentric- yes, and as beloved – as Brutus.

Once upon a time, in a little village called Saltney, just outside the English city of Chester, a passer-by stopped a group of boys engaged in the kind of incomprehensible cruelty one hears about from time to time: they were kicking a small stray cat, aged about eight to ten months old.

We bless the day that passer-by stopped them and rescued the little chap. Brutus was taken with all speed to the local vets where a veterinary nurse called Claire fell head over heels in love with him.

After a couple of days, when Brutus was not claimed, he came to live with Claire and her partner Adam. They had been reading Conn Iggulden’s Emperor series of books, and felt this regal feline should be called after the best friend and betrayer of Caesar, Brutus.

And sure enough, after a little while, Brutus developed the kind of habits which delight humans: the idiosyncratic kind.

He developed a liking for the large local supermarket, Morrison’s. He would potter past the stream, over the bridge and settle himself in the foyer.

Supermarket manager, Les Williams, told the Chester Chronicle: He’s just our little resident cat.If the sun’s coming through the window, he just lies down. If the sun’s not coming down, he sits on top of the recycling bin. When he first started coming, I thought ‘I have got to throw him out nicely’. But now I’d end up doing it 10 times a day.”

The answer phone machine at Claire’s says it all. It goes like this:

“Thanks for calling about Brutus. I assume you found him in Morrison’s car park and are concerned that he may be lost.

“He actually goes to Morrison’s every day as I only live across the road and he goes under the bridge and across the stream, so he’s unlikely to cross the road.

“He will make his own way back home later. I really do appreciate your call and the fact that you care, so thanks.”

50 thoughts on “The Supermarket Cat”