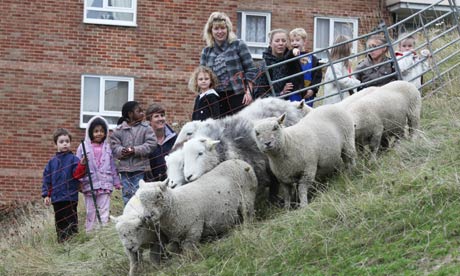 Fatalist, sheep are. Necessetarian, even.

In fact, you can’t leave sheep unattended: they will end up believing they’re going to die.

Stupid? No. They can tweet. This is the 21st century, after all.

This morning  I listened to one of the first programmes of the day on our talk radio channel, Radio 4: Open Country.

Contrary to its name, it was not in the open country this week. It was in Brighton, where the most extraordinary experiment is going on with urban sheep.

Brighton and Hove City Council has realised that lawn mowers and their operators cost more than a flock of sheep, and the sheep keep the grass cropped far better, and with a pleasing shabby-chic style which delights those bohemian Brightonians. Their presence and indeed their poo encourages wildlife. Rare forms of butterflies are re-emerging, as the sheep make the environment perfect for their fellow globe-dwellers.

The sheep are Herdwicks, the well-hard breed which holds on by its teeth in the Lake District. Because Brighton’s urban sheep – all 600 of them – are not on prize land but those scrubby bits of pasture on the edge of, or between, housing estates. The grass is just too rough for those namby-pamby modern sheep, but these tough-nuts handle it admirably.

The hazards of being an urban sheep are different from those of their countrified contemporaries. Schoolboys love to chase them; vital fence panels disappear, encouraging an awayday on nearby housing estates.

But, as we have already ascertained, even the toughest sheep is fatalist. They believe that all events are predetermined by fate,and therefore unalterable.

And so Brighton Council employs volunteer shepherds to help the sheep to see the bright side of life. The word shepherd seem to be passé:  your smart urban sheep has lookerers.

Here’s Brighton Council’s take on the job.  You give an hour or more of your time and attend a one-day course, learning about sheep ailments and the sheep calendar; you make your mobile phone available so that sheepish intelligence can be passed from lookerer to lookerer; and you spend time with the herd, getting sheep out of scrapes.

Which is where the Radio 4 broadcast came in. This morning the presenter was talking to a real live lookerer. As I listened, presenter Helen Mark and lookerer Jane Hawkins had encountered a thorny problem: a whole clutch of sheep with their hairy Herdwick fleeces caught in brambles.

Helen observed solemnly that the sheep were stuck fast.

But as the two approached – with secateurs and gloves to free the animals – the sheep just freed themselves and ran off.

But hold on, the presenter said: weren’t they irrevocably trapped a moment ago?

“Ninety nine times out of one hundred, they’ll just pull themselves free like that,”  Jane told her, “but they won’t do it on their own. they’ll just stay there and give up. That’s why you have to looker.

“Sheep don’t seem to have a lot of will power, or inner strength, and if anything happens to them, they assume they’re going to die; and then they just stay there and they do die.

“But if you can, as lookerers, come up twice a day, at least they’re not there for very long.”

The movements of the sheep are tweeted so city dwellers can avoid the area when dog walking, or take extra care. Just take a look. Its stream is moreish. The latest tweet at time of posting read: “The sheep at Benfield have now moved. It was quite exciting running them across the golf course!”

Poor old sheep. I wonder if happiness comes easily to such fatalist creatures?

Perhaps that ancient partnership with man is symbiotic in the most extraordinary of ways: each helps the other with blue-sky thinking.

42 thoughts on “What the well-dressed urban sheep is tweeting”