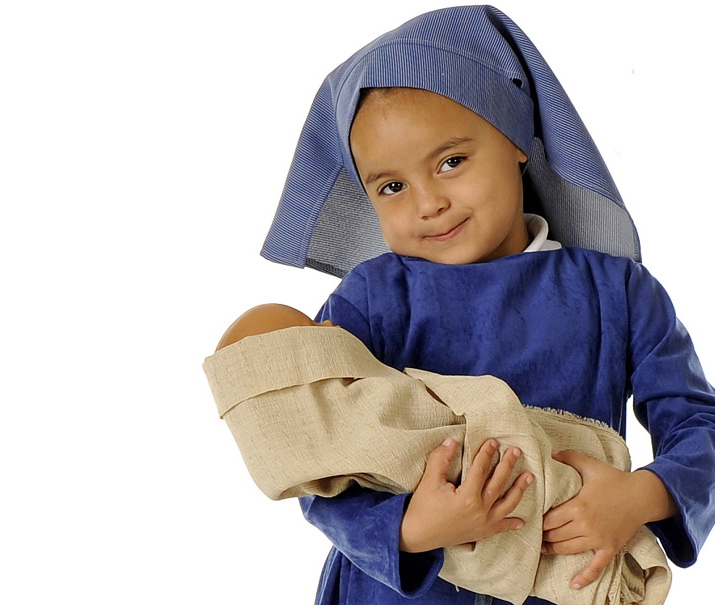 Mary has always been a coveted role in the Christmas play.

Parents across England wait for their little daughters to come home as the parts for the Nativity are dolled out. Who can still the flutter in their heart when they hear that their little girl has bagged the prime part?It doesn’t matter if they are staunch atheist; that blue dress and veil on a little tot  make her look little short of angelic. She positively gleams.

It doesn’t get much bigger than the mother of Jesus because the Messiah himself is usually played by an aged Tiny Tears Doll wrapped in a festive Christmas old sheet.

In Maddie’s businesslike way, at the age of about six, she went about preparing for what to do, were she ever chosen.

She needed a Mary outfit.

Asking Mummy was a dead loss. Mummy would look at the price of Mary outfits, and calculate that this one would only be worn for one month of the year. Mummy would observe pragmatically that Mary costumes were not available in the local shops, and suggest that Maddie made one out of clothes she already had.

And so, stealthily, Maddie cornered Daddy. And with her biggest, bluest eyes and the certain knowledge that Daddy walked past Hamley’s in London every day, she asked him for a Mary outfit.

Maddie was in Heaven. The Mary outfit was worn whenever school uniform could be discarded. Civilian wear was a thing of the past as Maddie indulged in method acting of which Larry Olivier himself would have been proud. She was Mary. End of.

Except that Maddie had a little cousin who was blonde and quite enjoyed centre stage, and also coveted the role of Mary.

And what with the family being a close-knit one, Mary would be visiting Mary and playing with Mary on quite a regular basis.

They were, and still are, lovely children: so you must forgive the fierce Marian rivalry which  set up between them. It was not uncommon to eavesdrop on the two of them to hear the same cyclical conversation rambling on:

Ad infinitum. By this time Mummies and Daddies were lost in the maelstrom of Christmas preparation, and I confess I did not follow the story and its twists and turns, though I feel sure Maddie could fill me in on them to this day.

But I was there at its conclusion.

We were at Grandma’s house, which was hopping with Christmas action. The knitted Christmas figures were in the crib which was lit by a festive red electric-bulb star. Various children would settle themselves there and rearrange everyone in it. The kitchen was noisy with mothers preparing things, the sitting room filled with affable blokes sipping Christmas beverages.

The meal was wonderful, and it came time to leave. And as we put our coats on to leave the house I became aware of something like a duel going on at waist height.

This last, from The Cousin. And then, no rejoinder from Maddie. I was incredulous. My daughter never forsook a bee once it was in her bonnet. It was not like her to capitulate to another’s Mary-assertion so mildly.

Goodbye, we said, goodbye: and everyone tumbled out of the door.

Maddie last of all.

And that little girl waited until the door was on the point of being closed; and she stuck her head around the door, and she looked directly at her cousin with the light of victory in her eye.

“I’m Mary,” she volleyed. And then slammed the door shut.

And Mary ran down the path, and jumped in her car, and drove far, far away.