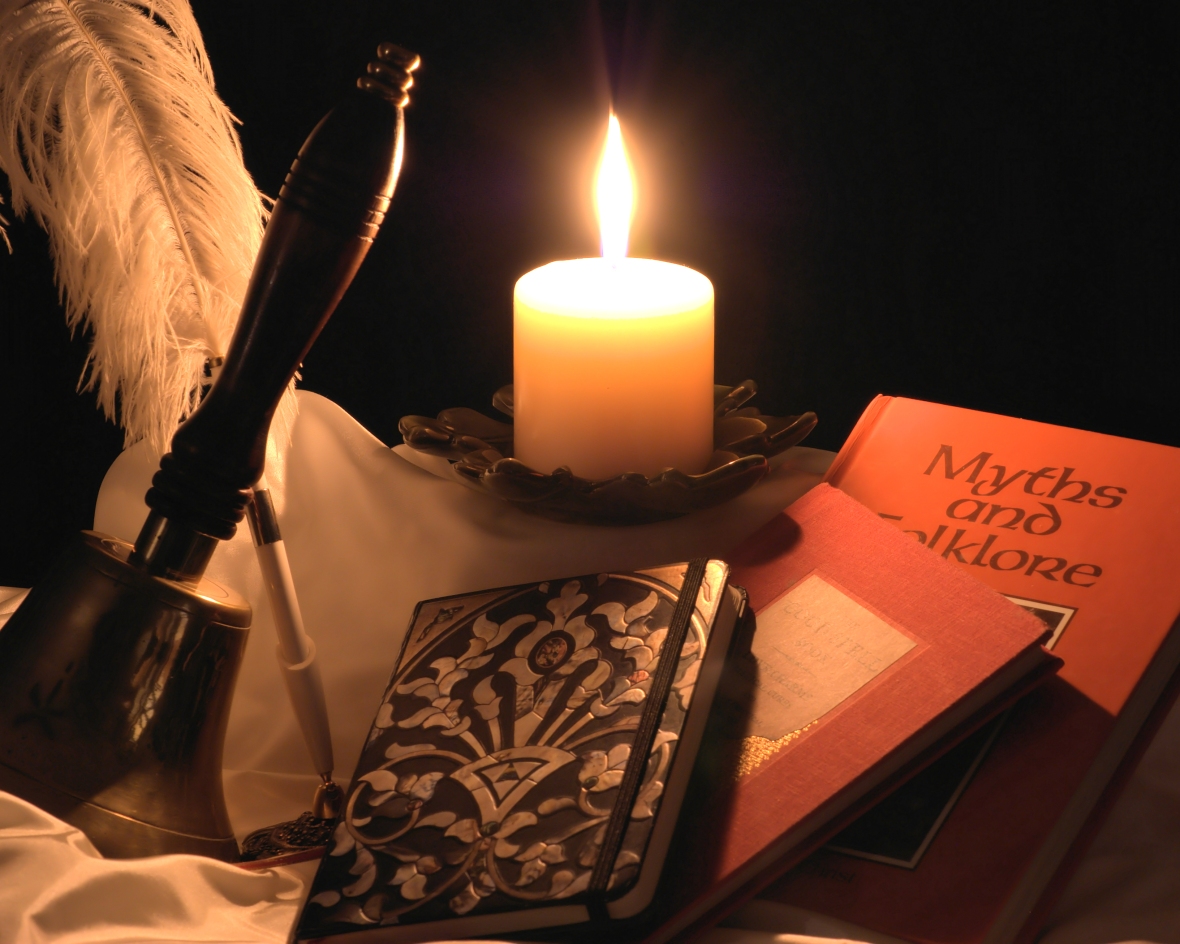 This is the third and final part of the Shrewsday traditional ghost story. If you are reading for the first time, you might like to start at the beginning, here, and continue to the middle, here.

The old man stared at the contents of his glass. The fire crackled as it had on so many other winter days. That midnight flight from Northdale Manor had been more than 50 years ago. But as he had related the story to his granddaughter, the dread was there once again, waiting in the wings.

“It was a long time ago,” he said, presently.

“You’ve never juggled for me, Grandad,” Amélie said in a low voice.

“The last time I performed was that night by the yew hedges in Northdale’s gardens,” he told her flatly. “I began to fear that the creature could travel: not only out into the garden, but what if it travelled further? What if I let it into some part of my life and it gained a foothold? I couldn’t risk that thing becoming a way of life.”

There was silence as they both looked back down the years.

“And I’m going back there tomorrow,” the young woman said, finally. “And you’re worried it might try to make itself known to me.”

He said nothing. He felt foolish: he felt he had let Amélie down. Martin had always prided himself on protecting his granddaughter from harm, on being the one with the wise advice. But he could think of nothing to say. He had worried her now: how could he reassure her? Should he tell her that time had passed, and surely the thing would have settled back in its grave? That peripheral vision was a fleeting visionary business, and any vision would last just seconds? That surely folks would have heard of other sightings, and word would have reached Martin?

Nothing seemed the right thing to say.

Amélie’s mother called from the kitchen. Dinner was ready. There was nothing for it but to get up and join the others.

It cast rather a shadow over Christmas dinner and the subsequent walk across the fields to the village. The family noticed two of its members wrapped up in their thoughts and did its best to fill the gap, chattering about this and that.

When they reached the village, and Grandad was once more settled in his cottage with the lights blazing, Amélie turned with that determined stance which was her signature, and set off towards the church.

That night,  it snowed. A thick blanket of white settled silently on the village. The air was sharp and bit the lungs; it was the weather for mittens and scarves and stout wellingtons.

Martin woke from a fretful sleep to hear someone hammering on the door.

“Grandad! Grandad! Are you awake?”

He was now, he reflected wryly and not without humour. It took him longer to get to the door than it used to. But he had no doubt that whatever it was could wait.

He opened the door to find two people standing stamping their feet against the chill: Amélie, grinning enthusiastically, and the Vicar.

“I feel sure,” Martin said slowly and with infinite patience. “that you are going to tell me what this is all about very soon indeed.”

“Indeed, Mr St John,” the Vicar intervened. “I am sure this must all look most irregular; but you see, your grandaughter has appraised me of the events at Northdale Manor in your youth, and tells me you are both concerned for her welfare at the hall today.”

Of all the hair brained schemes, Martin thought. Sleeping dogs just would not be allowed to lie, would they?

Amélie interjected briskly: “Grandad, you need to get some clothes on. We’re going to sort this out. Reverend Smithson is part of the Diocese’s Ministry of Deliverance- you’ve heard of them, I’m sure – “

Oh, yes, he had heard of them. Nutters who went around on the fringes of the Church of England, casting out demons from poor sods who must not know what had hit them.

“Yes, well, thank you, Vicar, but I think we’ll just let this one lie,” he said. “Amelie, I’ll talk to you after work…” And then, he stopped. The thought of Amélie, locking up the great old house on her own when that thing might still inhabit it – it was deeply unsettling.

“On second thoughts, I’ll come and help you lock up myself,” he said. “What time does everyone start to leave after the Boxing Day shoot?”

Of course, that meddling vicar contrived to be at Northdale with some feeble excuse or other at 3:30 in the afternoon, as the thin Winter light began to fade, and the visitors were getting in their cars to leave.

The three kept their communication to the occasional grim glance while the punters were still there. But as the last man loaded his cases in the boot and headed off down the drive, Martin met his granddaughter and the clergyman on the steps of the hall.

“Come on then: let’s get this over with,” he said. He was strangely relieved that there was a third person alongside himself and Amélie, even if it was an interfering vicar. If something had happened, what could he have done to protect her from harm, in reality? He was growing old. His days of battling the unexplained were far behind him.

“Hold on while I lock all the first floor doors,” Amélie said. She bounded up the staircase, two stairs at once, anxious to have this moment over with. Martin smiled at the vicar. “We’ll be out of here in a jiffy,” he told him. And he felt, suddenly, as if he were addressing more than one person: as if there were something else watching from a vantage point all its own.

Oh, no, he thought. Not now. Not after all these years. And not with Amélie….”

But his awareness grew like an aura, a physical sensation. It was there. It was as if no time had passed at all, as if it had just bided its time, knowing that one day he would be forced back by some quirk of fate. He could feel the colour drain from his face, and began to feel queasy. And he doubted he could stay conscious for many minutes more.

But for the first time, he was acutely aware that others could see it and sense it.

The clergyman, too, had paled. He was focused on a patch of shadow at the foot of the staircase which was gaining substance even as they watched, drawing itself to the height of a man. And – something else. For when Martin glanced in panic at his granddaughter’s face, as she returned down the staircase, he knew that she saw it as plainly as they did.

Everything happened in a matter of seconds, for that same disjointed movement brought the thing quickly to Martin’s side. And it did not stop there. With the coldest sensation of emptiness he had ever felt, the creature eased its way into his body. His vision began to blur; and alongside his thoughts were another set, marbled with an unhinged cruelty. Martin fought to stay conscious. If he went now, he sensed, he would never return.

And then someone was calling his name. “Martin! Stay with us!” the clergyman was shouting, red with exertion. “You have to do something for us! He has to leave the way he came. Quickly: there’s not much time….”

Martin reached out to grab the first three things on the nearby table. And just as the ghost seemed to have waited frozen in time for him, so had his skills. He hurled the objects from the table up in the air and began to whirl them around:and immediately there was a piercing, ringing peal which continued, slicing the gloom.

He felt his visitor shrink, as it had that night with those fiery torches, and with a strange reluctant pull, pursued by that inexplicable, incessant sound, it left. It drew back towards the staircase and those gnarled old gargoyles: but it never got there: instead, it faded, defeated, to nothing.

Martin dropped the whirling objects and stood, shuddering, panting, exhausted. His granddaughter ran forward, appalled at the situation she had created. She enveloped him in a hug and brought him to sit on the staircase. Neither of them spoke.

He went to the brandy which still stood on the side, left over from the shoot, and poured Martin a drink. The light was falling fast. Twilight had never been so unsettling; the three felt it, and hastened to lock every door and leave, driving  down the great long drive with the residual feeling that something was seeing them off the premises.

And back in his favourite armchair, his granddaughter  by his side, they talked it out of their system until the conversation lapsed and all that was left was that crackling of the fire in the hearth.

“Someone or something has a sense of irony, then,” Amélie said, at length.

Martin looked at her.

She gazed at him grimly. “I don’t suppose you saw what you juggled, back there?”

He shook his head. His mind had been in two places. He had been fighting for his existence.

Ah. Bell, book and candle. Martin smiled wryly. The three objects traditionally associated with excommunication. They had been good enough for Dr Faustus; and they had seen off the thing which had dogged him, an unfinished haunting, all these years.

The nether world, it appeared, still appreciated a bit of theatre.

34 thoughts on “The Conjuror’s Spectre: A Conclusion”