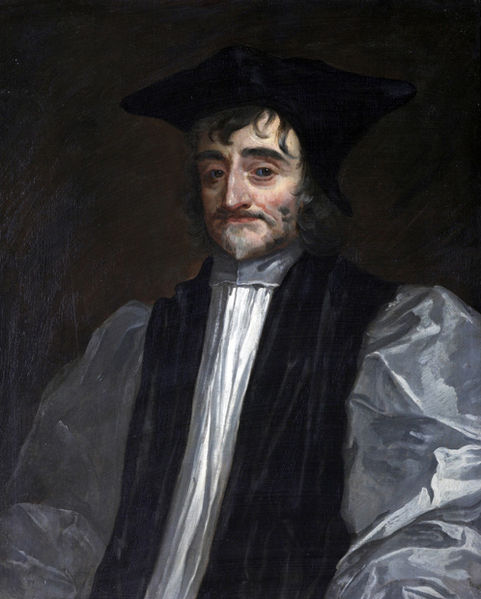 An unlikely prince, he looks.

But this prince of the church charmed the Sun King. He is the man who told it to the Roundheads straight; who, aghast, watched his friend die on the scaffold,  and who ended up bishop-prince of a castle as invincible as any on this strange collection of islands.

I met George Morley today, through the castle he changed forever, the fortress in which in his life ended peacefully on an October day in 1684.

Morley was born in Cheapside in 1598, a newborn Elizabethan, but he was an orphan by the age of 13. Nevertheless he went to Oxford and excelled there, becoming a man of the church.

A staunch royalist, he was outspoken as the days of Charles I drew to a close. Parliament did not like what he had to say when he preached at them in 1642. He was continually skirmishing with the Parliamentarians and was even imprisoned for a short time.

And then his friend, Arthur Lord Capel, was arrested for royalist plotting. Morley went with him to the foot of the scaffold: and when he had stood there at his execution, the priest took all he had in the world – some £130 – and headed for the exiled court of King Charles II at Saint Germain.

He shared elevated company during his exile. Louis IV became a friend.

A spell later, with Restoration in the air, Morely became one of the chief negotiators between the court of Charles II and the Presbyterians back home. And once Restoration was achieved, he had a finger in every pie.

Eventually, he became Bishop of Winchester, and came to live at Farnham Castle.

An ancient stronghold built at the behest of William the Conqueror, it still takes the breath away today.

Perched on a hill with great swathes of Surrey at its feet, every monarch of note had been part of its history, for it lies on the main artery between London and Winchester. Just a short while before our strange hero acquired the bishopric, a wing had been built onto the stolid Norman house which abutted the motte and bailey mound, especially to accommodate the court of Elizabeth I.

It had escaped Henry VIII’s dissolution, and sacking after the Civil War, unlike other bishops’ castles which were razed to the ground; it seemed this castle was untouchable.

As you walk round today, Morely’s touch is still everywhere. In airy extensions, a grand staircase fashioned by Grinling Gibbons; in the raising of the roof of the great hall to provide light, air and a balcony. In a stunning chapel designed to bring the priest into the very centre of the congregation.

At every turn there is a moment of revelation. An ‘ooooh!’ moment. Like the very best old houses, Farnham Castle has myriad nooks and crannies to explore, and constant surprises: a secret staircase from the back door, which leads to a bookcase in the Bishop’s private room; a suite of Elizabethan guest rooms, each designed to hold ten people each; graffiti from 1849 etched into a leaded window; 900 year old wooden beams which still stand the castle tall today.

And a chapel door sent to Morley by Louis IV himself: carved with exquisite suns, to remind the austere bishop of the Sun King.

To walk around it is to be in love: the grace and beauty, the unexpected perspectives from galleries which take one up high, the tall red brick tower. Morely and his fellow princes have  built a place of uncommon grace and beauty.

Yet at the heart on the building, underneath a staircase, is a tiny cell.

And this is where Morely slept; getting up at dawn without a fire to warm him, living a monastic life at the heart of all this affluence. Hearsay has it that he had a coffin made for himself towards the end of his life and chose to sleep in it, in  that tiny space, remembering that he was dust, and unto dust he would return.

At the heart of the affluent, a monkish austerity.

The whole, untouchable castle is a princely paradox.

40 thoughts on “The Prince of the Untouchable Castle”