Ever since ancient China, horses have been turning wheels for men.

Harnessed to cogs which turn great shafts, they can be used for threshing and grinding grain. A slow and laborious existence: one such mill has been preserved here in the UK. A Northumberland farm which had not used it since the 1830s donated it to the Beamish Museum. Four horses would have been tethered to it and worked day in, day out.

Of course there would have been good masters, and there would have been doubtful ones. If we only have one existence here on this earth, I would not choose to spend it pulling a wheel to make a man who owned me rich. Let us hope there were mashed oats and kind words at the end of the day.

Horses are not the only ones whose labour would have been useful to our forebears.

Here in the UK we have been treated to a rather wonderful set of programmes over the last month or so. Their presenter is a charismatic ambassador for British social history. Lucy Worsley is the chief curator of the Historic Royal Palaces: and she’s taken time out to research and present a set of programmes called “If Walls Could Talk”.

Each week, she has taken a different room of the house, tracking its history from early times to the present day. This week was the turn of the kitchen.

She doesn’t sit back and listen to experts: she tries out the old methods for herself. Thus she bathed like a Georgian when it was the turn of the bathroom: and she tested the first ever technique for a working closet using cherry tomatoes for solids.

This week we heard about a wheel turner with a difference: the Turnspit dog.

Turnspits became possible when iron grates were invented to keep wood and coal off the stone floor. The fire would be set into a wall, and a simple mechanism connected the spit, which turned the meat over an open fire, to a little wheel in the adjacent wall. A dog was bred with short, strong legs which would turn the wheel, freeing human hands to do other work.

Dr Worsley, in her own inimitable style, commissioned border terrier Coco to turn the only remaining turnspit mechanism in the country: at The George Inn, in Wiltshire.

A bemused Coco gave it her best shot: but her legs were long, and the spit was heavy. After some serious reconstruction she was rewarded with a piece of mutton which she helped to cook.

I wonder if her little stout-legged ancestors received the same pay?

The roundabout has been a way of life for so many working animals and many at leisure. Still, in parts of the world, they play a vital part, going round and round, day in and day out.

Let us hope, like Coco, they receive recompense for such a roundabout existence.

This is a repost: ever since I write this I have been looking to put Macaulay the family dog to good use. 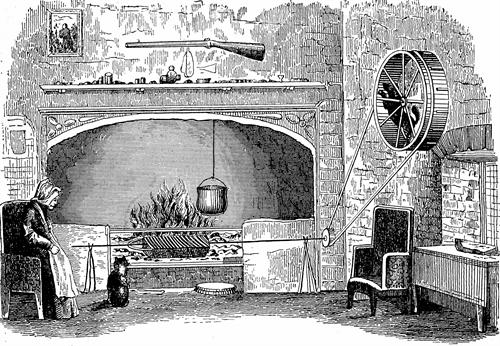 36 thoughts on “The Turnspit Dogs”