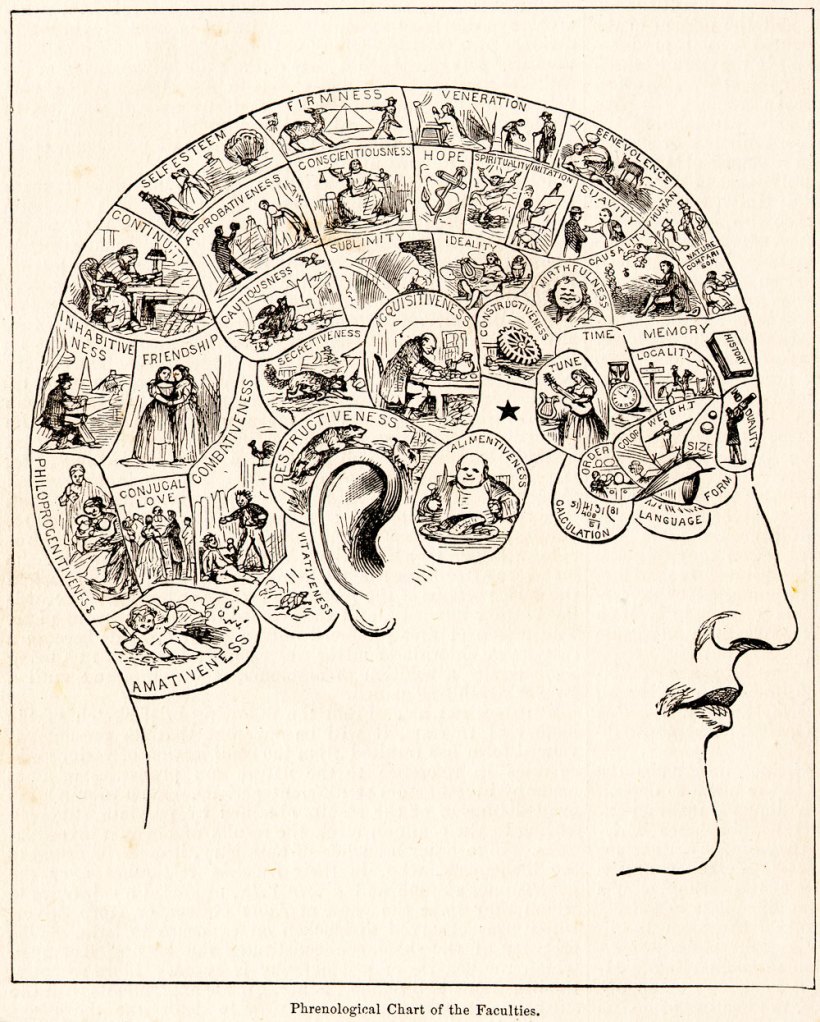 It is some time since those crackpot quasi-scientists, the phrenologists, were taken seriously.

A Victorian obsession, phrenology centred on the concept that the areas of the brain would betray their attributes through an examination of the skull. So you could tell what the brain and personality were – just by observing the pits and crevices of the cranium, using them to calculate the mass of each area of the brain, and thus each personality trait.

The phrenological map for the brain is fanciful, to say the least. It puts destructiveness just above the ear, and ‘amativeness’ – arousal – at the back of the skull. And the language area seems to be just below the eye.

Nevertheless, man has followed many blind alleys for every medical advance; and in the nineteenth century phrenology held just enough credibility – and fascination – for Miss Charlotte Brontë to harbour a desire to try one out.

The author of Jane Eyre had referred to phrenology briefly when she first described Mr Rochester. And now she turned to her publisher and friend, George Smith, to help her gain access to a reading.

But if she turned up as the famous author, a reading would be a synch for any crackpot head reader.

So she and George hatched a plan. They would go along to phrenologist Dr Browne, posing as Mr and Miss Fraser, two perfectly average punters on the road to enlightenment.

The pair were duly read, and studious reports published.

Miss Fraser recieved a glowing report. One worthy of Jane Eyre herself.

Her temperament nervous, the report claims, and her brain large; and she is kind to children but does not like to see them spoiled. “Her sense of duty and justice,” says Dr Browne, “would be offended by any dereliction of duty and she would express her disapprobation with warmth and energy.”

He adds: “She is occasionally inclined to take a gloomier view of things than perhaps the facts of the case justify…her sense of justice is of a very high order.”

Miss Fraser, Dr Browne continues, is endowed with an exalted sense of the beautiful, and the ideal, and longs for perfection.

But the conclusion is most interesting. “In intellectional development,” it reads, “this head is very remarkable.The forehead is at once very large and well formed. It bears the stamp of deep thoughtfulness and comprehensive understanding….this lady possesses a fine organ of language, and can…express her sentiments with clearness, precision and force – sufficiently eloquent but not verbose.”

Perhaps there is something in this phrenology. Or perhaps Dr Browne had glimpsed George and Charlotte on their excursions about the city, and knew their identities all along.

But his report about Charlotte mirrors her excellently.

And what of Mr Fraser?

“The estimate of my own head was not so happy,” he writes in his memoirs. He claims to have sent the original to Charlotte.

A postscript exists to this story. For a few days later George Smith ran into a friend who was also acquainted with the phrenologist in question.

“He mentioned that a friend of his [a phrenologist] had examined a lady and was so much struck by the imaginitive power she possessed that he should like to find something out about her.”

In all probability, yes.

42 thoughts on “The Brontë Brow: visiting the phrenologist”