Near the River Wye, in the Chiltern Hills, sits a village called Penn.

It is, and has always been a beautiful spot, with rolling fields and quaint buildings, an a couple of decent pubs – the Crown and the Red Lion – which appeared some time in the sixteenth century and still sit there today.

When the plagues hit London Penn was one of the healthy retreats for the children of the wealthy.

I wonder if that is how Sybil Penne came to be viewed as someone who might be a fit nurse for a princess?

Of a good local Buckinghamshire family, Sybil made a decent marriage: she married David Penne and had three sons, John and William, and two daughters. But her life changed forever when the King begat a male heir.

Edward was long awaited, his mother long mourned. He was born in October and the following year Sybil was appointed as his dry nurse.

And thence began an extraordinary career.

She lookes after Edward, who gave her the manor of Beaumond and the rectory of Little Missenden in Buckinghamshire. And records show she was in the household of both Queen Mary and Queen Elizabeth.

She had a house nearby, but she lived in some of the best rooms in Hampton Court. They are still there: right on the West Front, overlooking the drawbridge.

We none of us know when death is coming, and it can arrive swiftly and without mercy. Thus it was for Sybil. One mght be favoured by a king, but it is difficult to curry favour with Death.

The Reaper sent smallpox in 1562; it negotiated with Elizabeth I and she won, but her indomitable old nurse lost the battle and died in just a matter of days, on November 6, 1562.

Sybil’s marble effigy, a funerary monument, is there to this day, though her husband requested that her body be returned to Penn, where he is buried under the floor of the church.

She slept peacefully for a long time. Until 1829, to be exact.

My sources name a storm as the culprit: it damaged the church, and in its path was Sybil’s tomb. Though the church was rebuilt, residents of her apartments at Hampton Court began to experience strange disturbances.

The family at the time began to hear inexplicable voices, and a strange whirring sound, like a spinning wheel working. They would wake to find the room bathed in eerie light, the story goes; and one night a member of the family woke to find cold hands cradling his face.

In work on the building, workmen opened up the walls to find a hidden chamber containing an ancient spinning wheel.

This solved nothing and the apartment has never really recovered. A tall, gaunt grey-robed figure will often be seen walking across the West Front.

And there’s a very modern coda to her tale: it seems she has not yet found rest.

These days, that apartment is a set of offices. The earliest arrival one morning, not long ago, put down two shopping bags to enter the security number on the keypad which goes for security these days.

And staring at her through the glass was a woman’s face.

The lady was puzzled: who could be in the offices at this time? She opened the door and there stood a tall woman, dressed head to foot in grey, looking every bit flesh and blood; and for a short while the two women just stared at each other.

It was when the woman inside made to move that the new arrival realised there was something very wrong. She later described the woman gliding, as if on castors, past her, out of the door, and across the entrance to the palace, disappearing after a short while.

Who was she? The woman who worked in the office was in no doubt.

For she had seen the marble effigy in the church up river. 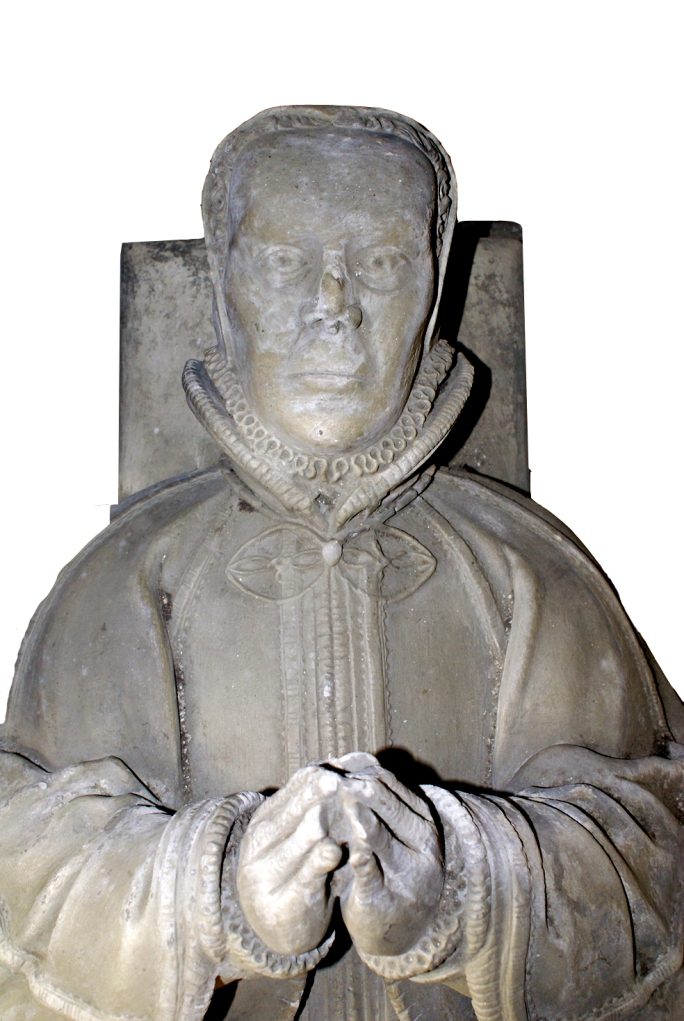 With thanks to former Hampton Court employee Sam Hearn, who supplied a number of important amendments to this story.

50 thoughts on “The Woman in Grey: a Hampton Court Ghost Story”