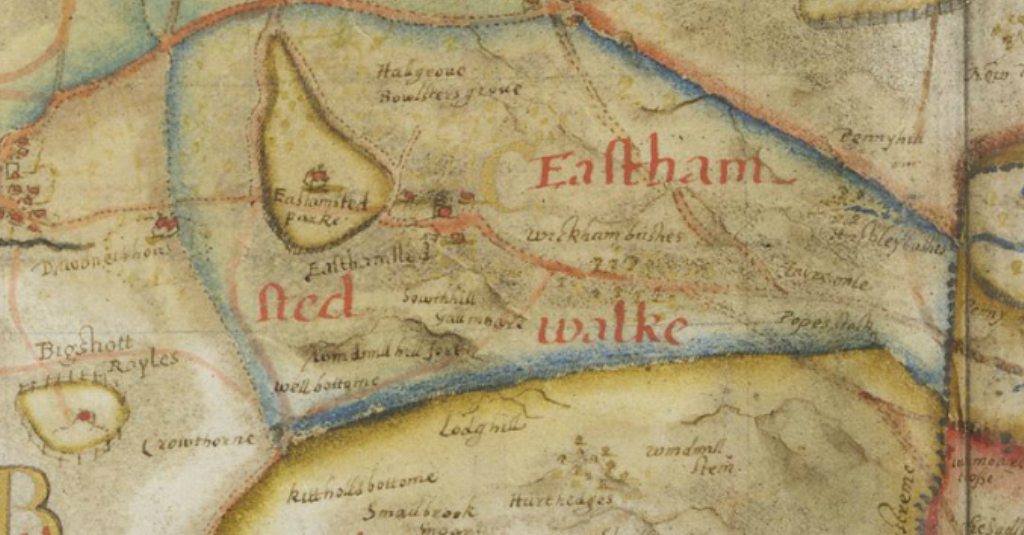 John Norden’s 1607 map of Windsor Forest. From The British Libary via http://www.europeana.eu

Just occasionally one is accorded a fairy tale.

Not a pretend one, but a real one.

Mine is a great 19th century mansion fitted out in dark wood. My story  begins with a desk by the window on the top floor, overlooking the vast lawns which stretch endlessly towards the forest.

At dawn and dusk the deer come to graze. In Summer the terraces are filled with gauzy princess dresses and brides who make it their home for the day. And in Winter the frost decorates the house and the surrounding forests in gleaming filigree.

My fairytale mansion is florid and imposing, and its predecessors have been there since the seventh century AD. I can glimpse the white stable block which is the last remaining sign of a past which reaches back to King Cynegils of Wessex who lived on this land in the seventh century. The place in my fairytale sits in the Domesday Book as property of Westminster Abbey, a place of 14 households, with five ploughing teams and woodland full of swine.

A hunting lodge for kings with an impressive role of visitors, the old moated house – now replaced with its Victorian incarnation – is the place where Henry VII rode out with his son Arthur to meet his bride, Catherine of Aragon; and where Henry VIII first danced with his wife to be.

Held by a powerful dynasty, the lodge was a regular haunt of the young Alexander Pope.And with the advent of Ascot and the racing, it was a hub of activity during Ascot week every year.

This old place has a great long straight drive which seems to go on forever, slicing through the fields to the monumental front entrance. It spices up the drive to work. As a colleague said: “I feel like Jane Eyre coming to work.”

The place has something of Mr Rochester about it. Stern, masculine.

But there is no mad wife in the attic.

No. Instead, there is me.

Me, and an entire efficient – and engagingly friendly – department. Don’t get me wrong. The attic rooms are well used and lit with gracious skylights.

And like all decent old houses it has its ghost. A white-haired lady bustling and rustling about the place who has no feet because the floors were once lower than they are now. She is glimpsed here and there, out of the corner of an eye, and whilst most say she is a previous lady of the house, I am not sure, for what would she be doing in the servant’s space?

I hope never to be in a position to verify the matter further.

My fairytale has only a few brief lines written. It is at its inception.

Life is transforming as I write. The old life is not over yet, the new one barely begun. And the beginning is always a honeymoon period, is it not?

But today, whatever transpires, I toast the fairytale no Grimm brother has penned. A small, private, very moderate fairytale all my own.

48 thoughts on “A Personal Fairytale”