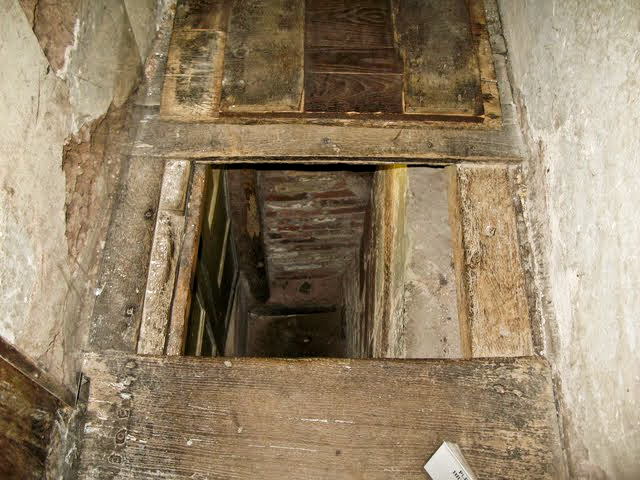 Sometimes, even a great man of the church just wants to slip away unnoticed.

There is a castle on a hill overlooking the houses of a Surrey town. It has belonged to the Bishops of Winchester forever and a day.

And on one afternoon a week it is possible to tour the castle,where you will encounter a very interesting bookcase indeed.

It sits on the first floor, directly opposite the Winchester Room which used to be the bishop’s room.

And if you were to look behind the bookcase, you would find a winding staircase in golden stone.

Hidden from the eyes of the world, it allows a bishop to disappear from view. The staircase emerges by a door to the outside world. Silently, one could flit away, far from the madding crowd.

There are other reasons to build a secret chamber.

It is possible that even today, some of them have not yet been discovered.

Some places were built especially to hide people away from those who would arrest them and carry them to a castle to be tortured. And the mastermind who built them knew his trade so well that it is possible we have not unearthed every one yet.

One man built them. A carpenter, little taller than a dwarf, created a network of safe houses across England at a time when tolerance was very far from being what it is today. He did it as close to cost as possible, and his unusal gifts gave him an uncanny knack of bending space to suit his own purposes.

His name was Nicholas Owen; born in Oxford , died rather nastily at the Tower of London, he spent his life moving from great home to great home, building his hidden rooms.

He operated during the reign of Elizabeth I. And at that time it seemed Catholics and Protestants would never get on. While Elizabeth has a firm-but-fair persona very different from her irascible father and highly-strung sister, a sectarian campaign still went on under her watch. Mass, the Catholic celebration, was illegal and priests were hunted out, often tortured and killed if found.

Hence these tiny rooms. Often tiny spaces only just able to hold a person, a raid would force a priest inside, often without food and always without sanitation, for days sometimes. For the troops that came would knock on the door without warning and storm the house. They would look at the footprint of the house from the outside and compare it to the inside, and then count the windows, knock on the walls to listen for hollow spaces and tear up floorboards.

They were rarely as bright as Nicholas Owen, also known as ‘Little John’. He chose a space away from the outside walls, cleverly exploiting the three dimensions available to him with endless inventiveness. You can still see his work at places like Oxburgh, Norfolk (1589?); Baddesley Clinton, Warwickshire (1588–91); Braddocks, Essex, and Sawston, Cambridgeshire (both 1592–3); Scotney Old Castle, Kent (by 1598); and Harvington, Worcestershire (about 1602).*

They did arrest him in 1594, and took him to the Tower of London for torture; but the stout carpenter withstood everything they could do to him and was released, only to help someone escape from the Tower shortly afterwards.

Events were bound to catch up with him eventually.

They did so at Hindlip, Worcestershire, in the freezing January of 1606. Owen and another were holed up for four days in a space in the Long Gallery with only an apple between them. An official report of the day states that ‘eleven secret corners and conveyances were found in the said house’.

It was from there to Marshalsea, and thence to the Tower, where torture and death awaited him.

But his rooms remain.

In my town is an old manor house, and to this day one can see the priest hole above the fireplace if one asks the local publican.

I wonder if it is one of Nicholas Owen’s?

I used the Oxford National Dictionary of Biography entry on Nicholas owen to write this post, which was written in response to Side View’s weekend theme, Hiding something, which you can find here.

54 thoughts on “The Hidden Rooms”