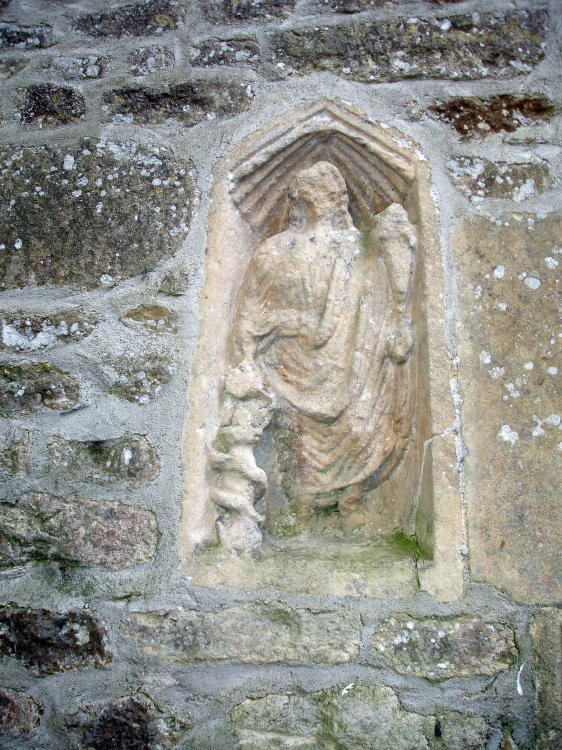 There’s a little church in a village called Tockenham, Wiltshire, with the strangest stray set into its walls.

Dating back to the 13th century, St Giles has all the usual bells, spells and figurines to mark the passing of the centuries. Even the bell – forged sometime in the 1480s is named after “Michael, Governor of Heaven’.

But somehow, in the southern wall of the nave, someone of pre-Christian origin stands,  holding his own.

This, it is now thought, is a minor Roman household God, snaffled from a nearby villa.

Why? Did the mediaeval Christians just think it would improve the décor? Class the church up a bit? Or maybe they felt a bit of Roman good fortune was not to be sneezed at?

Me: I think it is a spirit of place.

The Romans called it the Genius Loci: that special something every place has. It cannot be denied that every place has its character: a complex set of non-verbal signals, the smells, sights and sounds which set off a chain of associations deep within us, beneath the level of language.

And the Romans personified them. All over the Roman empire they adorned places: stone figures, carrying cornucopiae, libation bowls, or snakes, embodying all the qualities a Roman family would want in its villa.

It is a comforting thing, to personify all the complicated emotions with which a place can envelop one. I think of all the places I love and am almost overcome by how they would appear, and what their qualities might be.

But I think there are some places whose spirits I would not like to come across.

The past weeks in these pages have been peppered by stories of Hampton Court, and the ghosts which are said to have walked its cobbled courtyards, for whatever restless reason.

But what I am about to relate has no feet and no face: it is a spirit which lowers, yet will not be pinned down to human understanding. And implicit in its invisibility is menace. A hovering superiority, a predatory presence.

I think I blogged about Skeletor: the highly prosaic name given to a ghostly figure picked up by CCTV cameras in period dress shutting a pair of heavy doors. There are many questions surrounding that appearance: and one rainy afternoon in November I decided to trek to Hampton Court in a bid to track down the very doors myself.

A quiet word with someone behind the counter in one of the palace souvenir shops revealed the doors were understated to say the least: they were right at the back of an exhibition about the palace. One had to go right through, and pass a small auditorium where videos were screened, and finally, one would reach the doors.

I set off. There was almost no-one in the palace: all the school parties had gone home. I made my way through the exhibition, past the brightly lit to the dimly lit, and towards the shadows at the back.

I do not know precisely when the spirit of place made itself felt but it manifested itself in an insane desire to turn tail and run; spring out of the exhibition and back to somewhere where people walked. Living ones.

But I have blogs to write, and I pressed on and found it, the door. Briefly, I took pictures.

And then, I turned and I ran.

I have no idea why.

And then a couple of weeks ago my friend and I took the official ghost tour. It seems many have found it a difficult place to linger. One attendant walked into the exhibition space and experienced terrifying, blind panic, so that she collapsed and refused ever to work there again.

And palace authorities being what they are, they pragmatically conceded.

Because places have spirits. And if they are personified like our genial Roman friends, we are lucky.

It is unpleasant when they start playing mind games.