I suppose this is a love story. Or two.

In Drury Lane, there was a pub. It had come down in the world rather; in its grandest days it was the home of a first earl, a very good friend to Samuel Pepys, a valiant and celebrated hero. It looked like this:

It became rather disreputable by its demise. Well; Drury Lane, you can imagine.

It had the strangest name: it was called The Queen Of Bohemia. And thereby hangs my tale.

There was a real Bohemia; nestling in the centre of Europe in what is today the Czech Republic. And long, long ago, it had kings and queens, and one of them was Scottish.

Her name was Elizabeth Stuart and she was beautiful. Not only that, but she was renowned as being sweet tempered and generally great company. Her connections were impeccable; she was Charles I’s sister. Reverend Brewer, the man who wrote the phrase and fable dictionary, asserted that she had another name: The Queen Of Hearts.

If Guy Fawkes and his co-conspirators had had their way, it was Elizabeth they would have compelled to sit in the throne and become the very model of a Catholic monarch. But they were thwarted, and the young lady grew to be a beautiful, tall, extremely protestant 16-year old; who met a love of her life at Whitehall.

Her mother, Anne of Denmark, thought the suitor to be beneath her daughter. But it was love at first sight, they say. Frederick V, Elector of Palantine, King of Bohemia, was enchanted  with her, and she with him. They married shortly afterwards on Valentines Day, 1613. 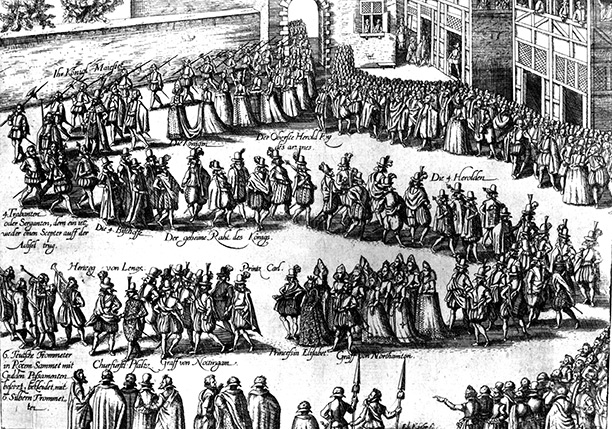 Oh, the pomp and the partying. In the week preceding the wedding Elizabeth went to see six plays by Shakespeare with her beloved. There were great mock-river battles on the Thames and masques and poetry at the ceremonies and celebrations. Elizabeth wore a white dress embroidered with silver, and drew a train carried by 13 bridesmaids.

John Donne wrote about the couple as phoenixes in Epithalamion; they were the talk, the very breath, of London. And their journey back to Bohemia was one long party. In 1619, the Bohemians asked Frederick to become their king, and Elizabeth became their queen.

But in doing so, they ruffled the feathers of the Holy Roman Emperor. Ferdinand II ensured the reign lasted only a year. And here we must step down a byway and leave the great main historical plot; for one of the soldiers who came to help battle was one William Craven.

Wealthy son of a former Lord Mayor of London, valiant soldier, Craven was a dashing celebrity. And some time in those 12 years between Frederick’s battle for Bohemia and his death of an infection in 1632, he and Elizabeth gained considerable regard for each other.

Frederick’s death devastated Elizabeth. She and her five children had no way to support themselves and Craven did so, financially. In her last year, when she finally returned to England, she lived near Craven’s house.

His house was named by locals as the palace of the Queen of Bohemia. And he planned and built two lavish houses for her, though she never got to see them. The talk was that she was his mistress; some say there was a secret marriage.

She died of pneumonia, a year after arriving back in England.

The traces of two great loves litter the history around these three people: Craven, Elizabeth and Frederick. Evidence is circumstantial but plentiful.

And centuries after they died and long after Craven’s house became a pub hosting women of the night and dark company, they are still the source of tittle tattle today.

25 thoughts on “The Queen of Bohemia”