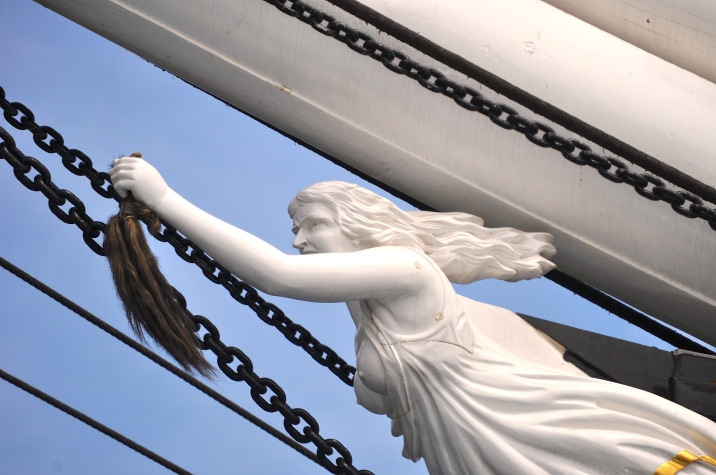 If you go down to the docks today, you’re sure of a big surprise.

Figureheads have been round for a long time. The Vikings used them to ward off evil spirits; as time wore on, they personified everything a ship stood for in a non-literate society. But they were big and heavy and unwieldy, cumbersome in times of war, and warships stopped using them; and so did everyone else, for a while.

But merchants – they must have liked a bit of theatre.

My ship sailed from China with a cargo of tea, and it had better sail fast. For the freshest tea fetched the highest price.

So they made clippers in the early 19th century, lightning fast vessels of unparalleled grace which could spirit tea from China for the ever-growing tastes of the British Empire. And the tea races became quite a national sport; they were reported in all the papers and the ship’s owners gained considerable prestige from their success.

Each one had a figurehead.

One of the last clippers to be made – in 1869 – was also one of the fastest. The Cutty Sark, at its top speed, could make 17.5 knots: outstripping all around it. Its day was soon over, what with steam ships and the building of the Suez Canal. But for a brief period it was the fleetest thing on the seas.

But what could a cutty sark possibly be?

To answer this, you have to go to Tam O’ Shanter, the poem by Robbie Burns which has such energy and humour it sweeps one off one’s feet. It’s an animated warning to farmers not to stay too late at market, as Tam, the poem’s central character does. And Tam is riding home, late at night, when he sees a vision: witches and warlocks in an unholy dance.

And the most comely witch is one with a nightie – a sark –  which is wantonly cutty, slipping down. The witch is called Nannie. And you wouldn’t want to get on the wrong side of her. She’s a nasty piece of work.

Of course, Tam cries out in impulsive admiration, and congratulates the nightie for its waywardness, and the entire pack hare after him, chasing him in a ride to the death.

He escapes, of course, But let that be a lesson to those who stay late at market. Don’t say I didn’t warn you.

And which figurehead do you think led the Cutty Sark  tea clipper on its scything journeys across the seas?

She looks quite graceful from far off. But as you draw nearer her apparel shows clearly that her priority was never going to be personal appearance. And the expression on her face is pure, unadulterated menace.

I wonder why the powerful creator of the Cutty Sark, John “Jock” “White Hat” Willis, owner of the Sark and a wealthy merchant of his time, chose this creature as his figurehead?

36 thoughts on “The Witch With The Troublesome Nightie”