Structures confirm the way it is.

Perhaps that’s why we find demolition so cataclysmic. When steeplejacks were taking down those huge chimneys from the industrial north of England they would pull huge crowds. And then the structures painted by LS Lowry and still standing in the lifetime of these hordes, would no-longer be there.

This huge event, and then nothingness.

Nothingness, as the crowds show, has its attractions.

But it, like rigid structure – it’s an extreme. Is there something which exists between the smug rigidity of the structures we see around us, and the nothingness when it’s not there?

Draw a cube with lines. And though before you sits a 2D representation of a cube, you could choose to look at it in different ways. How does each vertex connect? How do the lines overlap? You could look at it like this: 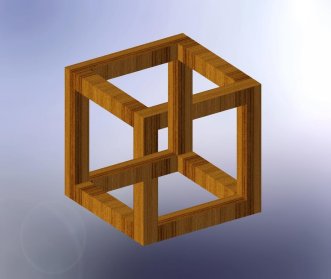 Worth a second look?

He was not much good at school; he kept flunking tests and getting poor grades, right through to college in Haarlem.

So at college, Mauk Escher switched from architecture to decorative arts.

In 1922 he went on a tour through Italy and Spain and met The Alhambra. The building wooed him and won him, and he spent the rest of his life loving the pattern and planes he saw during that momentous visit.

So he lived with his wife and son in Rome until Mussolini’s regime tried dressing his son in the fascist youth uniform and then he fled, in stages, arriving back in the Netherlands in 1941.

Which was the best thing for him; for the dull cloudy weather of the Netherlands fuelled the pictures inside his mind.

Mauk may have flunked maths, but he was a genius at pattern.  He adored taking a structure and questioning everything you ever thought you knew about it. Good morning, his paintings seem to say: and how would  sir or madam like to think about space this morning?

Well, you might well reply, it all depends on how you look at it.

Reality, ladies and gentlemen, is not out there.  It can change with the way you think.

It is not satisfactory, simply to gawp at life as it is and take it for granted. And this applies, not just to the terminally unimaginative, but to the highly enquiring mind of a scientist who will believe only that which he perceives as proven. He sits within a cube of his own creation, believing its structural tenets to be rigid and immoveable.

More things in Heaven and Earth? You have no idea.

Everything you see, everything you learn, can, and should, be questioned. Because even what we perceive as rigid proof may have a hidden perspective our minds are not yet ready to glimpse.

Because structure isn’t all it’s cracked up to be.

Written in response to Side View’s weekend theme, Structure, which you can find here

44 thoughts on “The Man Who Stretched Reality”