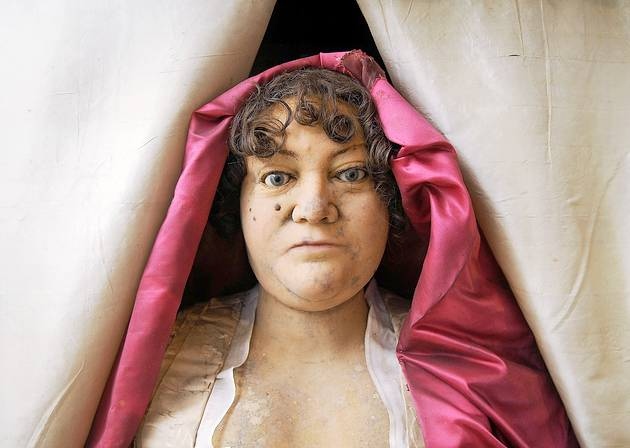 So, the Romans did it.

When rich Romans died, Pliny the Elder records, they had themselves made in wax. Not their whole selves, you understand- the cost would be extortionate – but their hands and their face. And their relatives would get their favourite frock or toga and dress them up, and parade them in their funeral procession. And afterwards, when all the food was eaten and all the guests had gone home, the effigies would be put in their own little cupboard in the family atrium so that any time you wanted, you could access a 3D representation of what your loved one looked like.

In the Atrium, where the fires burned, the effigies were wont to get a little smokey. Cicero writes that the oldest and most noble families were marked out by the smokiest effigies.

The wishes of the dead are often recorded; but not always the reasons why.

And so we will never know why a 50-year-old aristocrat from East Anglia made such an unusual request.

Sarah Hare was sitting there one Sunday in 1744, sewing, as was her habit. Of course, sewing on a Sunday was frowned upon; she pricked her finger, and got an infection, and died of it, and all the locals said that was her punishment.

And it would have ended there, had Sarah not been a fairly wealthy lady.

When they looked at their will, they found a weird request indeed. “I desire to have my face and hands made in wax with a piece of crimson satin thrown like a garment in a picture hair upon my head and put it in a case of mahogany with a glass before and fix’d up so near the place were my corps lyes.”

Best not ignore the wishes of the dead, and they didn’t; they obeyed her edicts to the letter. And so if you go to the little village of Stow Bardolph, in the far reaches of East Anglia, and look in the mahogany cupboard at the back of the church, there she is. As large as life and twice as scary, for she was quite the battleaxe if her appearance is anything to go by. The effigy includes her prominent wart.

She is dressed in her own clothes and bewigged in her own hair. She got old and tatty in 1984, and someone from Madame Tussaud’s came up and took her away for a two-year restoration. Tastes have changed, and smokey ancestors are no longer de rigeur.

Did she read her Pliny and Cicero? Did she want to emulate King Charles , whose effigy stood in Westminster for a good long while? Or was she just an eccentric old bat who would have delighted in terrifying little children for more than two centuries?

I and the family jump into the car today and travel to stay for a week in Sarah Hare’s neck of the woods. East Anglia: where stories like this one come two a penny.

37 thoughts on “Waxing for Eternity: the corpse in the cupboard”