When you’re a dog abroad in need of a poo, the one thing on your mind is common land.

This also applies to a dog on the Broads.

The last thing a dog, used to acres of unpeopled forest, expects, when he arrives in a county renowned for its vast agricultural landscape, is to be limited to one public footpath per village.

But this is what Macaulay, terrier extraordinaire, and his master were faced with this morning. It seems the wealthy landowners of the Norfolk countryside kept public footpaths to a minimum when land was being shared out.

Thus, the dog did his business, but it was an ignominious business, done where every other dog went, and nary a member of the local wildlife to chase.The neighbourhood cows lowered, an ever present censure.

A mutt can’t relax and perform satisfactorily under that kind of pressure.

Phil arrived back through the stable-doors of our tiny holiday cottage. He and the dog both had a slightly wild light akin to claustrophobia in their eyes. And after a quick conflab we decided that at the earliest possible juncture, we should head for the beach and run the dog ragged.

But this was no ordinary beach.

We were instructed to head for a place called Sherringham Park.

It belongs to the National Trust: laid out in 1812 by consummate landscape architect, Humphrey Repton, it was bought by the National Trust in 1986.A an ideal stately house, it nevertheless stands in the lieu of a perfectly proportioned hill with its back to the azure sea because this is Norfolk, and the North Sea wind can freeze the breeches off one.

We pulled up in their car park to find a full National Trust outpost; cafe, bookshop and doggie water bowl.

And the place was heaving with dogs.

Macaulay was delighted in a solemn, focused sort of way, and acquainted himself with each new canine contact using his distinctive blend of doggie diplomacy and aroma.

It took two miles to walk across the fields to the beach. Two glorious miles through the most gorgeous English parkland.

The sky was blue, a windmill cavorted on the horizon, a steam train forged back and forth along a coastal track, the clouds scudded in a businesslike fashion across the sky, and eventually we made it to the beach.

The kids loved the waves and the wind, and the dog loved the blasé al fresco eating style which left ample food on the floor for pilfering after the humans’ meal was finished.

And when there was no more food, why, there were endless unmentionable things to explore. A smorgasbord of unthinkables. Macaulay toured the menu speculatively and settled for the closest thing to a turd: though on closer inspection I pronounced it to be some strange form of seaweed.

A lary compatriot of Mac’s ran onto the beach and snatched up Felix’s cricket ball with such sleight of jaw that the dog gaped. How dare he, Mac emanated, though he has never fetched a ball in his life, and only takes them up when they belong to another dog.

“Sorry!” A harassed owner threw the ball back minutes later.

A cricket match and some time watching the sand martins later, we doubled back across the parkland, and the dog began, less to trot, than to slope. By the time we arrived back at the NT water dish, he was pooped. Spent for a day.

Every dog needs common land. But can one call National Trust land common?

The dog’s demeanour would indicate that in this special set of circumstances, it had served his purposes magnificently. 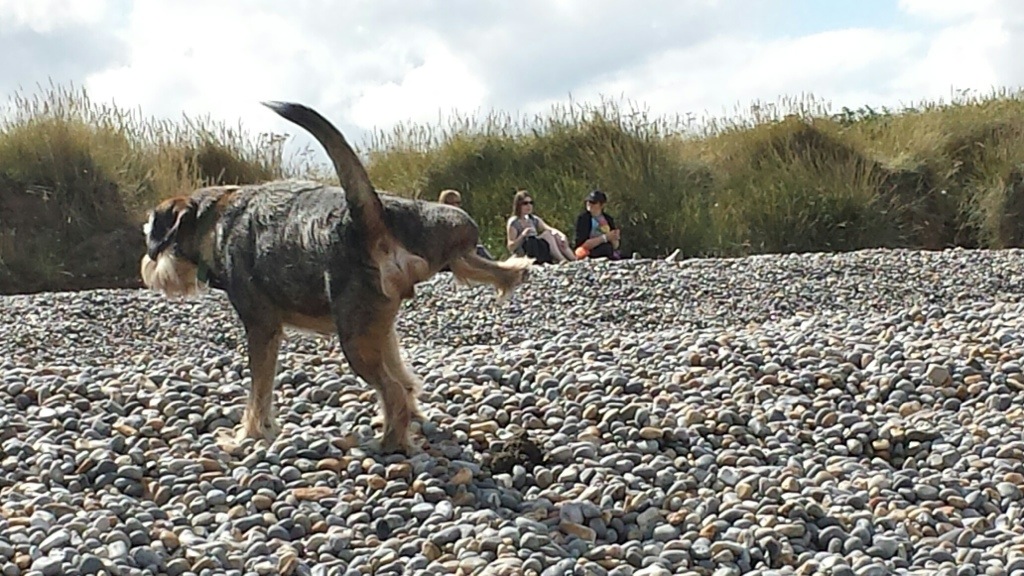