There comes a time in every English seaside holiday when one is overcome with an insatiable desire for chips.

Not American crisps. Those fat, flabby, potato-finger cholesterol-fests which, in Britain, are served in paper, or if one is being really radical, a cone.

I think the English have a gene, seriously I do. When we wore woad, when there was no central heating, only rain and freezing fog and snow, I think we evolved to cope with it.

Back then, we needed layers of pale blubber to keep us from freezing to death in our little encampments with only a puny campfire between us and hypothermia.

So at some point in prehistory, I posit, they invented fried things. A fast-track blubber acquisition system.

It only took Sir Walter Raleigh to discover the potato for us to develop our ultimate insulation food.

The chippie- shorthand for the fish and chip shop – is a staple of every respectable Albian settlement. Typically, it has no chairs to speak of,but a long stainless steel counter concealing huge deep fat frying vats. At eye level, a glass display case for battered sausages and fish and other unfortunates.Above, a menu, with prices; usually in some deeply plebeian font and often red.

One goes in with an order and a tenner, and comes out with dinner in paper, helped occasionally by polystyrene cartons. And the smell that comes from those little paper packages? Suffice to say it is enough to drive any Englishman insane with desire.

And yet a chip is such an unassuming object; not crisp and together like American fries or Belgian frites, but pale and flabby and steaming and, I suppose, a little sweaty.

Holidays generally require one to sit on the harbour wall greedily gobbling chip-shop chips, smelling the pungent seaweedy brine and watching the seagulls duff each other up for bits of dead fish.

Norfolk. Now, North Norfolk I have found a little different.

After intensive research, Phil ascertained that two chippies could be found in the main town two miles down the road.

But we wanted a holiday chippie. A chippie next-the-sea.

We performed a very long getting-ready-for-chips walk, up over the cliffs, past an old radar station and back over a pudding-bowl hill.

Suitably exercised, we returned along the strange salt-flats coast. It is not a Brighton Rock, kiss-me-quick coast. It is wild and strange and beautiful, without a single fluorescent inflatable dingy in sight. Seagulls do not duff each other up there, because they do not duel for rubbish. They are the closest to polite seagulls I have seen.

I was not hopeful about finding a chippie here.

But Phil is an expert. Chips run in the blood. His great -great grandmother opened the first chippie in Manchester. He has an internal chippie-diviner, and was adamant that we would find a chippie.

We drove the coast road. And opposite a particularly stunning bit of wetland reserve, there it was. Open 12-2pm. A Norfolk chippie, albeit in a listed cobble dash cottage which charged a whopping £1.40 a bag.

When we got our paper packages home, the chips were a bit odd. They tasted perfect, but they were wan and thin, and the portions were small.

A Norfolk chippie, it was run by a Scot. 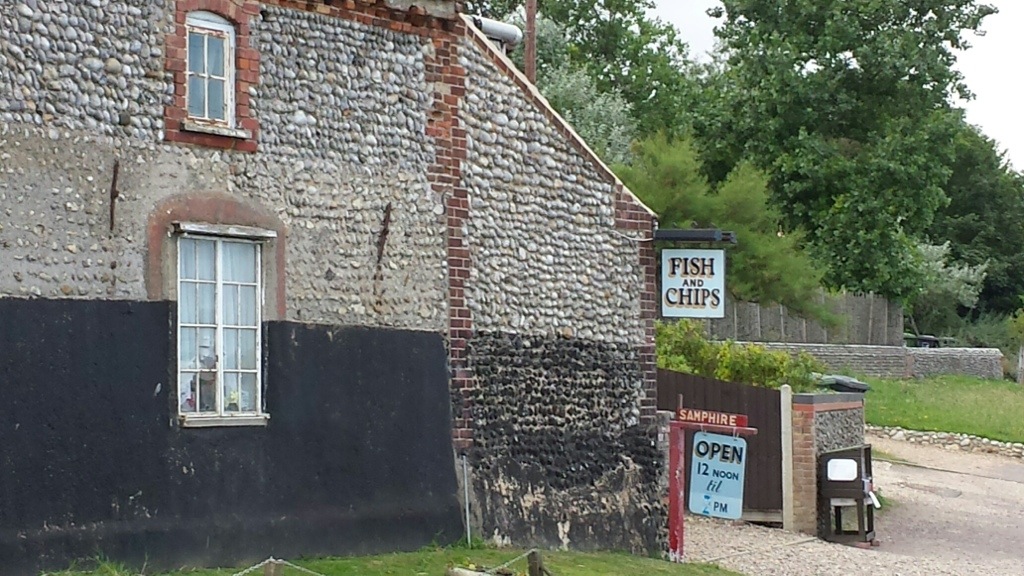 47 thoughts on “A Tale of Two Chippies”