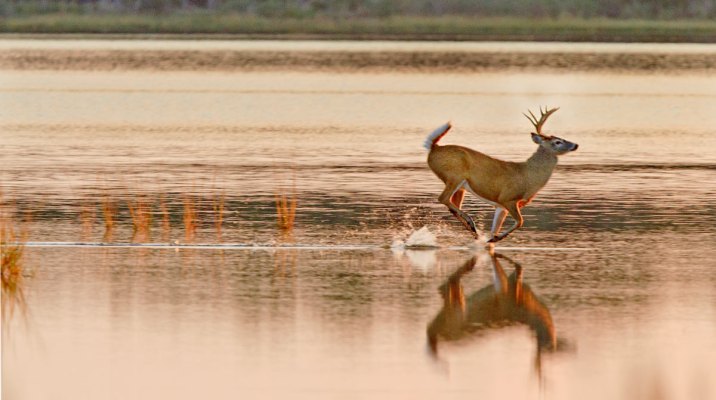 Pic from the blog of joseherworld.blogspot.co.uk. Some beautiful photos there…

Time was, when deer would stand around and spend the time of day with you.

If you had the dog on the lead, of course. If you didn’t it would just be like unleashing  a small smelly wire-haired maelstrom into their calm and ordered, glassily silent world. Delighted, on many occasions, my dog would hurtle through ferns and brambles, heather and brush, blissfully unaware of any obstacle, a headless chicken of a mutt, all blurry at the edges.

He wouldn’t have a hope in hell of catching one of them. He’d just get a whiff of that just-been-here-deer-musk and he would be oblivious, deaf, blind and insentient of the rest of the world. It would all go away for this one sublime moment.

The deer, ahead, would be muttering under its breath as it bounded effortlessly ahead. Bloody dogs. You get a nice quiet meditation pose going, tree pose, balancing on three legs and synchronising breathing; you finally get to that bit where you’re at one with the cosmos and some filthy terrier comes and wrenches you away from the wheel-hub of creation and sends you hurtling off in search of an alternative meditation venue.

Lately, though, we have not come upon deer doing the tree pose. Or even a salute to the sun.

Because – have you noticed? – the deer all seem to be in a tearing hurry.

Twice in the last week I have been walking at the side of the iron age fort in the forests behind my house, and a deer has shot out straight in front of us, and away, who knows where?

I was sitting on the top floor of the Victorian mansion where I work, taking a screen break and staring out of the window on what is always a tranquil scene: a gorgeous fountain, yew hedges, lawns stretching out into the distance, you know the type of thing, when out of the woodland stage left came a large deer. He shot across the lawn like a curate late for evensong. Such haste in a deer is rare if they are not being pursued, but they are, trust me, under no pressure from such obvious external sources.

They are just running everywhere.

This evening we were walking across the tabletop of the fort when out shot another. I fleetingly wondered what would happen if I collided with something like that and dismissed the thought from my head hastily. The dog was with me, but bless him, his eyesight has not improved with the years. Though he is only eight, he would need spectacles to clock the deer ahead.

So I waited for his nose to do the honours.

Usually he is unaware of the deer until he is on top of the ground where it ran. And then he goes skittery and shoots off in lamentably belated pursuit of a deer who is, by now, part of recent history.

But today he missed the trace scent of the deer completely; right until he sniffed the other side of the path where the deer had come from. Ah, splendid, his non verbal communication proclaimed. A deer. And he skittered around, choosing not one direction but many in quick succession, tracking exactly no deer at all but having a glorious time at it.

I have no idea why the deer are running. It is disconcerting; but one creature will always savour every hoof-fall.

And that would be the dog.

33 thoughts on “The Running Of The Deer”