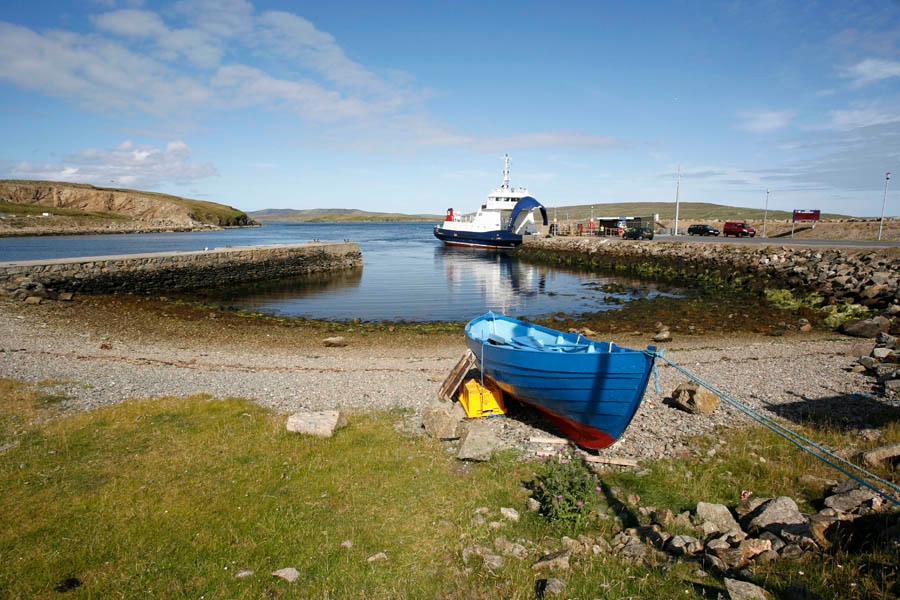 He works through his angst in night-time stories which weave bits of the day into bits of his psyche. The result is invariably unsettling.

His fairytales – the waking stories generated by the imagination of a whole community – are often similarly strange. Odd to the point of uncomfortable, we have all heard tales of serial killers, cannibal-witches, firebirds and living biscuits  – gingerbread men  – which are so much part of our background that we never stop to question how unutterably weird they really are.

And men have catalogued these tales. There are categories for each; animal brides, beauty-and-the-beast variants, legendary farts and suchlike.

There is even an Abducted By Aliens category.

By this, I think the folklorists mean not ones from outer space, but those who live just beyond our ken. Strange earth dwellers about whom we do not have the faintest idea.

Like the ones in this story, which hails from the rugged Shetland Islands.

Yell. The white island, or the barren island in Old Norse. People have been living on Yell since Neolithic times, and they’re still there, numbering 966 in the 2011 Census. They settle along the coast, and those beaches of white sand, communities nestled amongst some strange old souvenirs of the past. When archaeologists excavated an eroding grave, it’s rumoured they found seven skeletons; one of which was over seven feet tall and had small but perfectly formed horns above the temples.

And at the top of a hill on the island is an ancient stone footprint,  12 inches by 4 inches. They call it the wartie, and to stand in it is to rid oneself of warts.

Strangers indeed, some of those who have lived in this wild place in the midst of the seas.

Anyhow: the story goes that a rather gifted fiddler was in demand all over the island. To employ him was a guarantee that your gathering would go with a bang. His brilliance was unparalleled; his melodies could set feet tapping and tempt long lapsed dancers to try once again some of the steps of their youth.

Halloween drew near. And the villagers begged the fiddler to stay and play for their hallowe’en dance, but the next village had offered more, and he took it and set off along the path by the sea, heading for a night of merriment.

He got that, all right.

There’s a class of creature who only exists in the Shetlands and the Orkneys. It almost does not bear thinking about: a small, squat cross between a fairy and a troll. It goes by the name of a trow. They love music and they are not averse to recruiting musicians in a rather imperative fashion.

They kidnapped the fiddler. They bore him away to their party; and the fiddler knew it did not do to offend a trow, and he went along with it, though the party was long and his feet grew weary. At length, the party died down, the guests drifted away in ones and twos, and the fiddler was allowed on his way.

But when he got to his house,ready to tumble into bed after the night’s exertion, he found it in ruins. The roof was gone, grass had grown across the floor and the walls were decayed. And when he looked further, he found he knew not a soul; no one could remember the house being whole and inhabited in their lifetime, they told him. It was rumoured that the master of the house had once, centuries ago, mysteriously disappeared and never returned.

He stayed the night with a kindly old man, and went to church as the next day was Sunday. And the moment he took communion, the fiddler and all his glorious talent simply crumbled away to dust.

I’ve heard some alien abduction stories in my time.

But if that doesn’t beat all.

34 thoughts on “The Abduction of the Fiddler.”