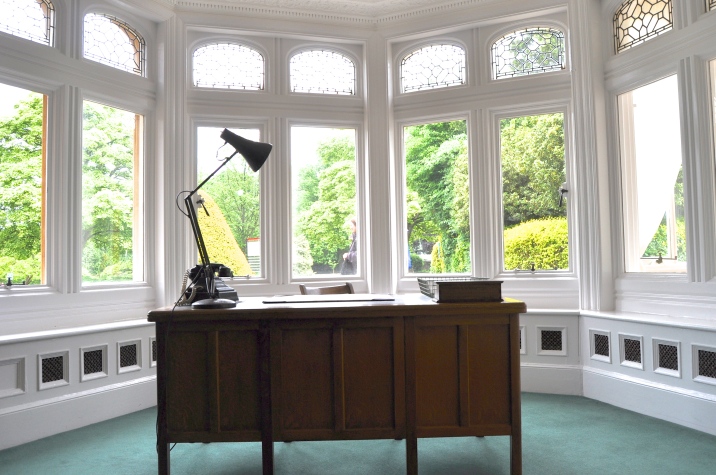 A bay window looking out on a spacious drive.

Not an extraordinary view. If one is being sniffy one might point out that it is not one of the grand old English Houses. Bletchley, built after an older house was pulled down, just before the dawn of the nineteenth century, is a miss-mash of Victorian Gothic, Tudor and Dutch Baroque. It is a spring chicken compared to many of the great houses thereabouts.

But it was to this room that Barbara Abernethy, personal assistant to the then head of  the Government Code and Cipher School, Commander Denniston, was called, one chilly February night in 1941.

It was in the teeth of the blackout, black as pitch, when four US Military personnel arrived and were ushered in. Barbara – who is recorded as having been intrigued but sworn to secrecy – poured each man a glass of sherry. Would Scotch have been more appropriate?

Whatever the tipple, they were here to discuss a set of codes which had been intercepted between the Germans and the Japanese. Codes which concerned the Americans.

But in that room, they set the pattern. Intelligence would be a collaborative business from the moment the four left their sherry glasses and walked out of  the meeting. And because of the close collaboration between America and Britain – whatever has happened since – the dawn did, finally, come.

Stand in this space today, and it’s just another room. Except that to anyone who lived with those who went through that loneliest of stands, it isn’t. It’s a memory in bricks and mortar, remembered best when the dark closes round, and  Autumn draws in.

26 thoughts on “The Dawn Before the Dark”