From John Foxe’s The Acts and Monuments which you can find here:

When was the last time you looked at the underside of your table? Or – if  you are a prosperous two-table establishment – tables?

Mine was a revelation. Why I bothered scouring the top when such a microbiological feast was thriving on its underside, I do not know. I have taken a cloth and strong disinfectant and banished the tiny shanty town underneath.

It took three hundred years for them to look underneath one particular table: but if anyone had looked underneath before it would not have survived. For there was hidden a priceless work of art; a work they would, at one time, have paid men to burn.

But the reformists did not think to look under the table at Norwich Cathedral, and the Despenser Retable survived.

Five panels, each on the theme of the death and resurrection of Christ, nevertheless include vital clues as to the retable’s origin. Several shields identify knights who fought alongside Richard II in the Peasant’s Revolt, and historians now think this gorgeous piece of work was created in thanksgiving for victory. It is even possible Richard II and his beautiful wife, Anne of Bohemia, were there for its dedication.

The only reason this treasure survived was because everyone thought it was a table. Because reformation, in England, meant the tearing out of images and the burning of wood.  And though much historical vandalism has happened in the almost 500 years since, nothing quite irks me like the thuggery which lost us so many treasures here in England.

There’s a picture. It portrays Henry VIII on his deathbed, pointing to his heir and successor, Edward VI. 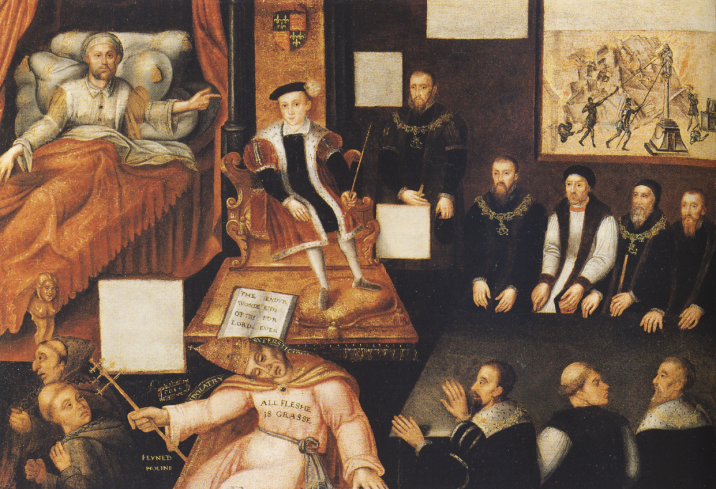 And if you look carefully, in the background, there is a picture I find chilling.

It shows men tearing down a statue. I can see why they did it, I hate my religion florid myself, but one look at the underside of that table and we have a tiny taste of what was lost.

Funeral director Henry Machyn – unearthed by Roy Strong in his Lost Treasures of Britain – wrote of the carnage: he said they made “great [bonfires] of rodes and mares and Johns and oder emages, ther thay wher bornyd with gret wondur”.

Rich men acquired what textiles they could. Peter Heylin, writing 100 years after the events, wrote: “Many private men’s parlours were hung with altar-cloths, their tables and beds covered with copes….it was a sorry house, and not worth the naming, which had not somewhat of this furniture in it, though it were only a far large cushion made of a cope or an altar-cloth.”

Gone. All gone, destroyed by men like the ones in that picture.

32 thoughts on “The Priceless Art Bonfire”