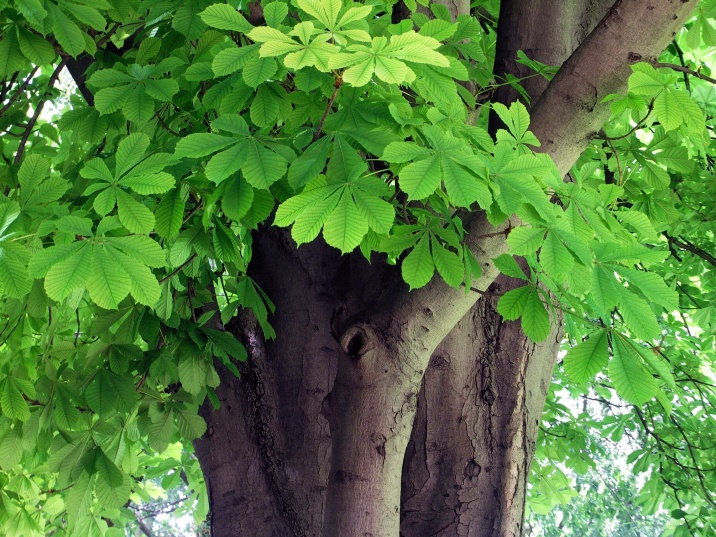 Just outside our back garden, and over the road, and up a track, is a three thousand-year old hill fort.

Not that you’d know it.For long since, men have planted the rough heathy land with trees. It was Windsor Forest before the Forestry Commission came along and planted conifers as a cash crop. For years, the flat tabletop of the fort was indistinguishable from the rest of the forest because of the pine trees which covered it.

The trees have provided cover for manoeuvres. They practised for World War II there, and there are still concrete pill-boxes and tin huts to tell the tale; but you couldn’t have seen what was going on as an enemy from the air, because of the dense pine forest.

The pine is only part of the story, however.

For this forest boasts the most stunning ancient deciduous trees, great tall ents, oaks and birches, and probably most ravishingly lovely, the chestnut trees. At this time of the year the ground is covered with spiky purses full of plunder: the glossy brown chestnuts promise so much but are – I am reliably informed – a nightmare to peel.

They are my favourite, beloved old trees, the chestnuts. Their pale grey-green bark soars skywards. They seem to preside, somehow. They have an equitable courtesy about them.

It is their job to stand at the great East entrance to the fort and guard the sunrise. It is probable they were not there when men built their iron age houses and farmed their cattle up on the tabletop; but they are how the fort is dressed today. They are familiar.

And on Monday morning early, the winds hit them.

We knew they were coming. And compared to many parts of the world, they were not so very cataclysmic. We do not do weather well here. We flap, whenever it is excessive.

The winds were the worst since 1987 in some places. And inevitably, timber fell.It was bound to be that way.It is how nature works.

So: on Monday evening, we walked up to the fort to look at how it had fared.

Almost everything was still standing. The forest had stood up to the gales admirably, a tribute  to the rangers who work so hard to manage the ancient woodland.

But there was something wrong with the frame of the fort. The lines were different.

We puzzled. And then we realised: one of the great ents had snapped its trunk clean in two.

Some squirrel or woodpecker had made its home half way up the trunk and over the years, it weakened it. The winds simply snapped it off.

At its feet were the means by which it turned sunlight into gold: its glorious head of hair, its great spreading branches, all crumpled and cramped in a fold in the ramparts. It had the shocking frankness of a murder scene.

The mighty had fallen. And when we looked up to the skyline, it was bereft: sky where there should be auburn changing leaves. We would see the moon clearly there, but it would feel bald.

Trees. We take their great old spirits for granted, and then they are gone.

There will be one less guardian of the sunrise tomorrow morning.

27 thoughts on “Guardians of the Sunrise”