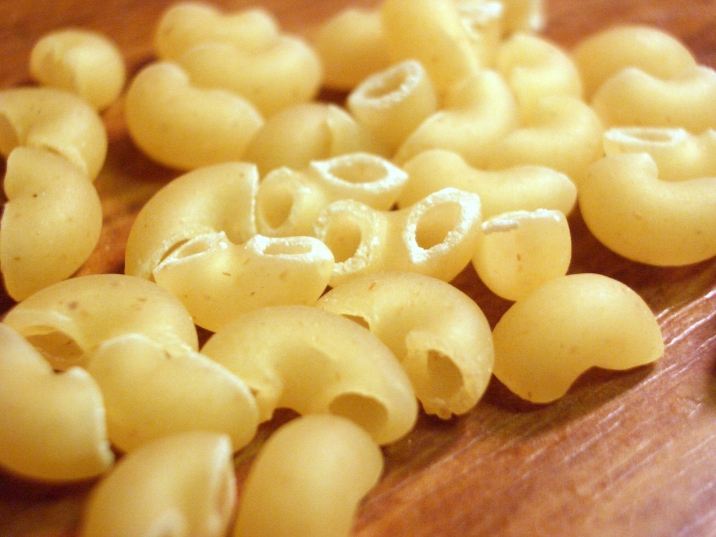 I remember looking after Big Al- now a strapping five years old – when he was a toddler.

The saucepan cupboard was one of his favourite places: because, teamed with a wooden spoon, you could do one of two things. You could make an outrageously loud noise; and you could pretend-cook.

But Al was no fool. He knew you couldn’t pretend-cook without food.

And I’d throw open my bounteous pasta cupboard and we would raid it for farfalle, and tortellini, and fusilli,  and penne.

Oh, macaroni. Numbered like the stars, adored and stirred studiously by small boys. I would leave the kitchen for an instant and return to find boy and dog, both crunching contentedly.

Macaroni was peasant-food in Italy. Teamed with cheese sauce it is one of my great comfort foods.

You can get macaronic language too, you know.

It is a mix between Latin and any spiel you care to throw in. Used memorably in  that raunchiest of classics made respectable by Carl Orff, Carmina Burana.  Secular songs for singers and choruses to be sung together with instruments and magic images. A heady mix of Latin, Middle High German and old Provencale, it throws together syllables with raw energy, hacking at three languages to make a savage hymn to the Spring.

“Merchant, give me the colour to redden my cheeks so that I may make young men love me whether they wish it or not. Look at me young men! Let me please you!”

There are other Macaronic poems.

Like that in the second lesson of Nine Lessons and Carols: In Dulci Jubilo.

It was written by an old monk in 1328, in a mix of Latin and High German. The monk, Heinrich Seuse, claims to have had a dream in which angels came to him, and asked him to dance, and sang the words to him.

Macaronic angels. How very refreshing. And its words have a momentum all their own:

Which, translated, says roughly that our heart’s joy lies in the manger, leuchtet vie die sonne -shining like the sun – in the mother’s lap.

It fills me with the sudden urge to mix up modern English with Latin and see what happens.