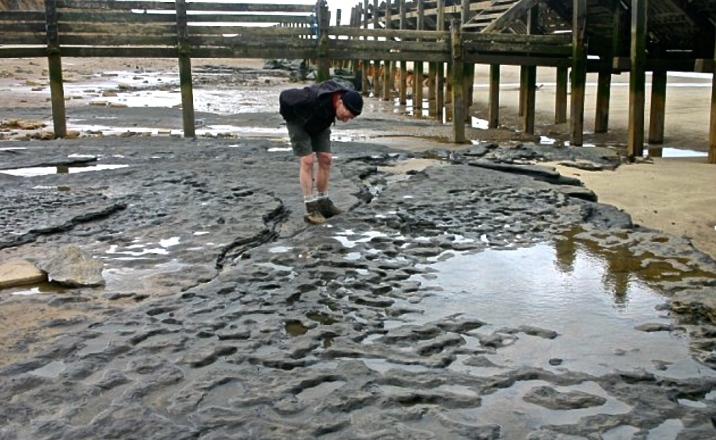 Picture by Martin Bates for the Daily Mail

Ah, the gales they are a-galing, and the rain it hammers down.

Our poor county of Somerset is all but submerged. Coastal areas are being ravaged.

Every cloud, no matter how murderous, has a silver lining. News broke yesterday that off the coast of Norfolk, at a little village called Happisburgh the crazed seas have performed a miracle. They have uncovered a set of footprints which are thought to be the oldest outside Africa: 800,000 years old.

A team of archaeologists from the British Museum, Natural History Museum and St Mary’s College, London, identified them after the storms had battered the Norfolk Coast.

Temporal snobs like me will note that this knocks the 5-8000 year old footprints at Formby in Lancashire into a cocked hat.

Look at Happisburgh on Google Earth: an unassuming little village with a caravan park close to the sea. It had a population  of  1,372 in the census of 2001, though back in the Domesday it was a large and powerful settlement well worth taxing.

And perhaps it had been for many thousands of years.

Just up the road from the beach and the caravan park, close to Happisburgh Primary School, lies Happisburgh Manor.

The building is a mere temporal blip  in Happisburgh’s prehistory and history. It was built in 1900, and it is that oddest and most charming of ideas: a butterfly house: with four wings at angles to a central core, just like the creature which gave it its name. Happisburgh Manor is a beautiful, indulgent, arts and crafts work of art, a stunning place perched there the the lieu of the coast.

Its architect was a Detmar Blow, flamboyant hero of the Arts and Crafts movement. Closely allied with John Ruskin and William Morris, he styled himself an ‘itinerant architect’ , travelling to and living at each job much as the mediaeval craftsmen would have done. Not only that, but he gathered a team of itinerant masons around him ( stoneworkers, not handshakers).

He was born in 1867. On the last day of 1900, Britain suffered what it is suffering now: terrible gales. Horrendous weather, and Wiltshire and the land running to the West got the worst of it.

Those were the days when Stonehenge was in private hands. It was owned by a peer: Lord Antrobus at Amesbury, whose abbey Blow had been renovating.

On the very last day of the year in which he built the Norfolk Manor House – 1900 -the unthinkable happened in Wiltshire.

One of Stonehenge’s trilithons – the name for two uprights and a piece balancing across the top – fell down in a storm.

This was not the first time. But it was monumental, and the Peer knew it. He called in SPAB – the Society for the Protection of Ancient Buildings – and he called in Detmar Blow.

And Blow began to work to repair Stonehenge.

“The leaning stone must be raised,: the Times of April 23, 1901 records. “It contains ‘two grave flaws’. When placed upright these will matter little; but if the stone is left inclined, the effect of rain water freezing in these flaws will before long break off the upper bird part of the stone.”

It would be a long, long time before the trilithon would be put up once again. But it was Blow who corrected the dangerously listing upright nearby, and set it straight.

Our weather: it seems more often an adversary than an ally. It batters our precious stone circle, thought to have been built in 3100BC; but it has uncovered some of the very earliest traces of man ever found in these parts.

You lose some; you win some.

36 thoughts on “The Man Who Set Stonehenge Straight”