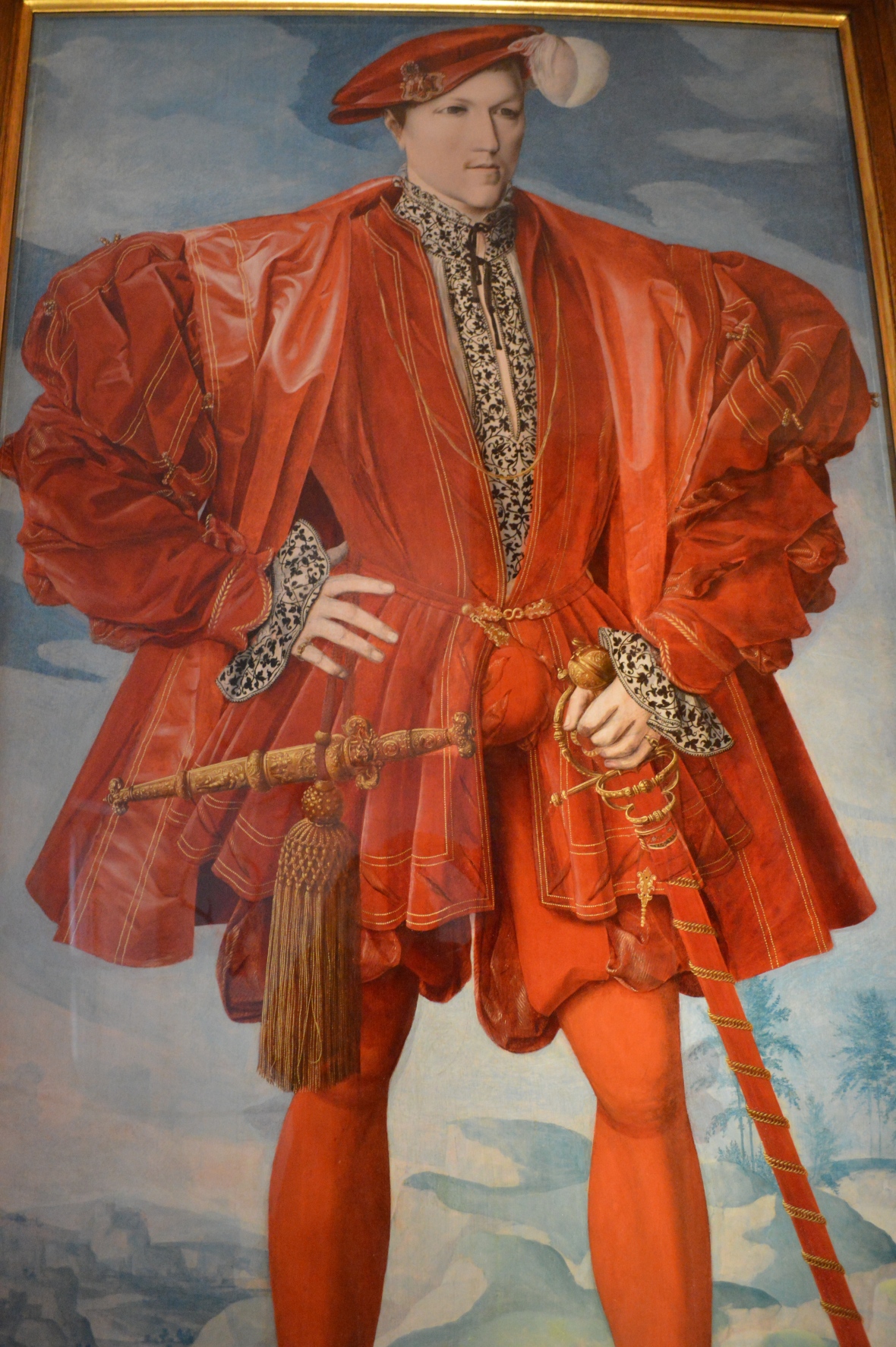 As we have lately been learning, people who are 500 years old can arrest you with a gaze, if they are painted right.

Our last subject caught us with his ingenuous charm; this next, with his splendour. And yet we may never know who either of them are, and they hang just a few footfalls away from each other at Hampton Court, one of the great English palaces.

The man in red is life-size; and he wears scarlet.

A frame full of possibility, a boy, yet a man. And young as I shall never be again; someone with just the grizzle of a beard and all the cool arrogance of someone who has not really, completely, met life yet.

He baffles the academics, who are uncertain about his identity and how he could have been painted thus, standing as only a young king should, in a powerful war-ready pose, head-to-toe in such an unusual colour.

Charles II was not at all happy, on his return to England, that the royal art collection had been dispersed. He set about reconstructing his heritage. In 1660 he was sold a collection which included this one. It came from the continent, and the seller claimed this was a portrait of the young Henry VIII by Holbein.

But the style is surely too aquatint for Holbein?  Even at its first inventory, the portrait was recorded as ‘A young man in a red garment, red bonnet and white feather with his hand on his sworde and a dagger hanging by’.

But who was he?

It is just possible he could be the young Henry VIII, and the person who hawked the pictures to Charles II in the first place was actually telling the truth. But this is Henry between 1530-1535 according to Joos van Cleve. You decide; I think he’s looking a little thick about the jawline.

Facially, it is the second candidate, Henry Howard, Earl of Surrey, who looks most like the sitter in this most charismatic of paintings. You can take a look at him here. Howard was a poet; he brought the sonnet to England. An all-too familiar story dogs this character: from one of the most powerful families in England, he fell foul of Henry and was the last person ever to be sentenced to death, on a charge of treason, by the old curmudgeon.

Henry VIII’s  illegitimate son by Elizabeth Blount was a shoddily kept secret by all accounts. Some academics believe it is possible this man in red was Henry Fitzroy, the Duke of Richmond and Somerset. Dying at 17, he left behind him possessions which were inventoried. And among the list of effects?  A gown, doublet and hose in crimson satin, and also a doublet and hose in red taffeta.

You can take a look at him here.

Me? I’m not sure I care. This young man’s persona dominates the place where he hangs and puts others into the shade. He is a glorious spirit of youth, of that time of hope and ambition before reality sets in.

Most have a bucket list: I have a Tardis list. And should time travel ever become possible, I shall make myself young again, and put on a red dress, and wear splendid jewels; and permit myself one night to go and dine with the Man In Red.

Or read the facts and vote on his identity here