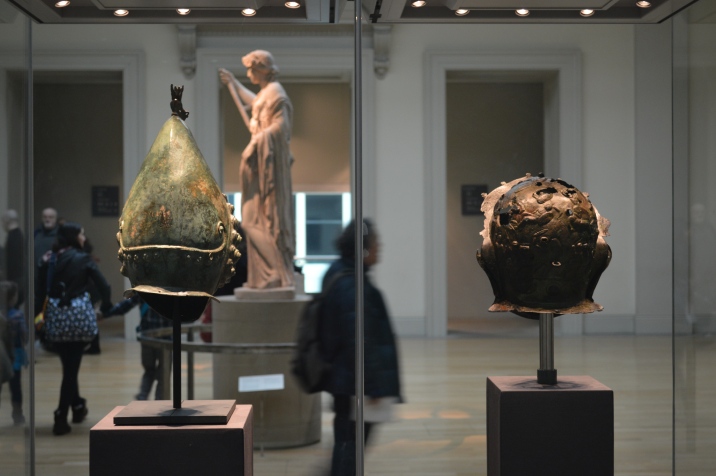 Phil’s  news team met Kristen Davis on the plane over to Johannesberg the other day. We bumped into Olympia Dukakis in Starbucks in Greenwich Village our first time in New York. Diana Spencer’s brother wandered into our local pub in Cornwall once as we sat with our pints.

You never forget these moments: when a face you know well and have heard so much about is right there in front of you.

And I had such a moment today, though I must confess that the celebrities concerned must have died some two thousand years ago.

Regulars will remember my bemoaning the loss of the Crosby Garrett helmet into a private collection. It slipped out of the hands of the Carlisle-based  Tullie House Museum, outbid despite its brave effort to raise £1.7 million towards the helmet’s purchase.

The helmet is a true jewel of a find. Discovered by a metal detectorist, in Crosby Garrett, Cumbria, it is a ceremonial helmet; one not used for fighting but for contests. Thus, it is lavish beyond words.

I was sad because the helmet has left the place it belonged. It had been snapped up right in front of the world’s top museums, by who knew who for a private collection.

It now emerges that whoever the private owner is, one thing must be owned: they are nothing if not generous with their acquisition.

When the helmet left Carlisle, after the closure of the exhibition of the helmet at Tullie House on January 26th, it travelled down to London, to the British Museum.

Speculatively, I walked into the Museum today. Felix wanted to see the Rosetta Stone, and Phil the Zoroastrian room. I had half an hour to pack in all the British Museum’s greatest hits.

So I took in the Sutton Hoo collection at a rate of knots, and then turned to climb the stairs to the European galleries, my perennial favourites.

And I was completely unprepared for what lay in wait in the glass case at the top of the stairs.

There it was: the Crosby Garrett helmet. Exquisite, and large as life. For all of us to see and learn from. There, in the most public place possible.

And not only that: its partner was right next to it. The Ribchester helmet gazed levelly out alongside its companion, perusing the tourists who ambled by. Do you know who I am? the two seemed to say. Have you any idea how important and significant we are?

I knew. I squeaked, if truth be told. And I spent quality time there with my Ancient Roman pin-up boys, gazing so I could take them in, noting and photographing the fine details.

They are celebrities of the first order, and I was star-struck.