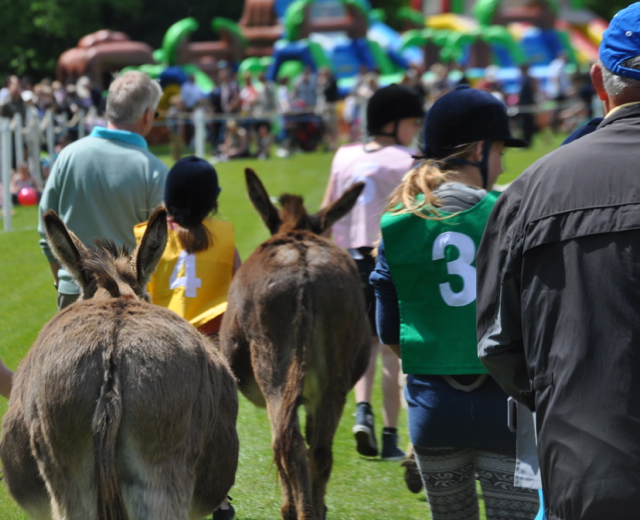 Alas, we must abstain from donkeys for the time being at least.

They are addictive, though those who have tried tell me they are an atrocious ride. But donkeys need firm turf beneath their feet, and that is one thing which, in England this lovely May, we are in short supply. For the rain it raineth almost every day.

You may well have heard of that oddest of phenomenons, the donkey derby. Second only to those contests where men stuff ferrets down their trousers, the Donkey Derby is, just as it sounds, a derby for donkeys. But while donkeys are great for sedate tethered rides across the beach, they can make the wildest steeds.

Families arrive on the green expanse and gaze indulgently at all the flags and balloons and amiable stallholders. This derby is badged up as a Very English Occasion, and thus parents queue up to get their children registered as a donkey jockey.

What fun, they smile, and hold the cameras ready for those special moments.

But donkeys are not always placid steeds, or at least, the ones I have observed are fiery non-conformists.  Jocasta or William or Percival hoists themselves on, teetering uncertainly, and then the starting horn booms. And there must be something about that sound, or possibly someone is waving carrots at the finishing line, for the donkey bolts off harm scarum, hell-for-leather, with no regard for any passenger. Most of the hopeful jockeys have no idea until they are in full flight that every donkey possesses something not found in the rest of nature: an ejector seat.

There are several ways one can make one’s money at a Donkey Derby.

One can sell food, and books, and toys, and bric-a-brac, and that makes a nice tidy profit. And each donkey which rides is sponsored by a local business or concern.

Phil was waiting for us outside church a few Sundays ago. “I’ve sponsored a donkey,” he said with unimpeachable resolution.

The advantage – or perhaps, the disadvantage – of living with someone for 20 years is this: that you can follow the labyrinthine workings of their mind marginally better than Perseus. I knew where my husband was heading with this one.

I sighed wearily. “What’s it going to be called?” I asked, almost fearful of hearing the answer.

Phil grinned. “It shall be called : ‘My very hairy dog‘, he announced with unabashed pride.

It transpires that last year, he observed with some considerable interest that the announcer and commentator for every race is none other than the avuncular and much beloved parish priest.

Phil, probably the greatest fan of our small opinionated terrier,  was most eager to hear Father, on the impressively large sound system, yelling with abandon “And here comes my very hairy dog in the outside lane…” or other such doggerel.

It transpired he was too late: all the village businesses had beaten him to the donkeys. And now, the very day before, the field has been deemed as simply too waterlogged to take even one single donkey.

26 thoughts on “Forgoing the Donkeys”