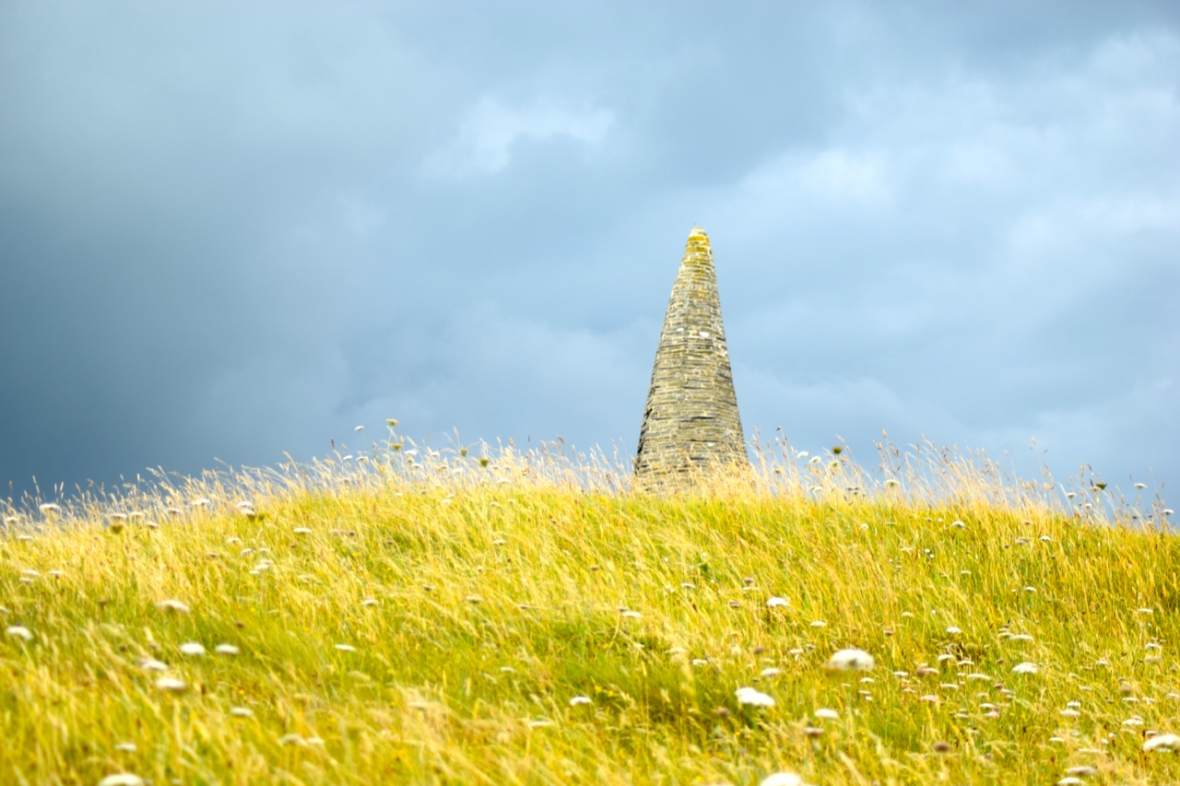 A more beautiful and remote site a hermit could not have hoped to have found.

Enodoc was a hermit. He liked his privacy and not talking to people was not a problem, and so he chose a site next to the Atlantic Ocean at the mouth of an estuary, deep in North Cornwall.

Those who live at Daymer Bay know it can be a balmy heaven on a summer’s day: these days houses have grown up all around and the privileged classes run their matchstalk dogs joyfully across the vast sandy beach.

But in the teeth of a winter gale the waves can hurl frozen sands in great giant’s fistfuls at the coastland. Enedoc must have been a singular kind of aesthete, combining the very beautiful and the uncompromisingly spartan; but then, I’m sure he knew how to keep warm.

He died and drifted into hearsay, but the sea kept flinging sand at the shore. By the 12th century, someone had dubbed him a saint and built a church in his name, right where he lived, out of slate and rubble. They built them well in those days, and St Enedoc Church sat squat and staunch with a jaunty wizard’s hat for a spire.

It was not perturbed by a bit of sand. They make them tough in Cornwall.

But over the centuries the dunes rose like the waves had done before them. Gradually, the sand covered the church almost entirely.

By the 15th century local church powers-that-be were worried. The sand was covering much of the roof. One cannot collect tithes from parishioners of a giant-sized sand dune.

And so they decided that once a year, the vicar and parishioners would let themselves in through a hole in the roof using a length of rope, for a hasty service in the ‘Sinkininny’ church.

And that went on for centuries. Until in the mid-nineteenth century someone decided the little church should be exhumed, and so it stands there today, with dunes hemming it in on all sides, dug out of their centre and now really quite a celebrity.

The church is a celebrity for many reasons. It has novelty, for now it sits at the ninth hole of St Enedoc Golf Course within the sound of the waves crashing on the shore and the hollering ‘fore” from enthusiastic golfers.

But above all it is where one of our greatest poets, John Betjeman, chose to be buried.

It is a truly sacred place, and when I wandered in on Friday it was decked in flowers from a wedding the previous Saturday. It was really and truly beautiful, and Enedoc the Hermit, whilst possibly concerned about the amount of people who swarm to the site, must be quietly congratulating himself on the cloak of peace and serenity which swathes the place come what may.

Then roller into roller curled
And thundered down the rocky bay,
And we were in a water world
Of rain and blizzard, sea and spray,
And one against the other hurled
We struggled round to Greenaway.
Blesséd be St Enodoc, blesséd be the wave,
Blesséd be the springy turf, we pray, pray to thee…

35 thoughts on “The Church Under The Sands”