It pays to return to a place. Again, and again, and again: and the blessing of being alive is that there is always some detail one has missed, or a new light one has never seen.

I make no secret of being a junkie of the heady charms of Hampton Court Palace, there on the Thames.

I have stood in its Great Hall many times, craning my head at the dazzling roof, awed by the colour, marvelling at the power play in the architecture and decor. One would not have liked Hal, but one cannot but marvel at how he chose to wield his authority.

This time, the umpty-thirteenth, I stood with my friend Lydia and my attention turned away from that stunning roof to the figures in the tapestries on the walls. And once I had looked at them, I simply could not take my eyes away.

The literature tells us the walls of the Great Hall are hung with the story of Abraham. This was apposite for Henry VII, for Abraham provided a Founding Father flavour, legitimising Henry’s choice to break with the international Catholic establishment; and Abraham had a son.

Say no more. The scene of Isaac’s circumcision is laden with unsubtle symbolism.

The tapestries were probably commissioned by Henry, threaded with gold, though there are two other versions of these ones elsewhere, one in Madrid and one in Vienna. When Hal was dead and gone the tapestries were brought to Westminster, and present at the Coronation of Elizabeth I; interestingly though Oliver Cromwell got rid of much frippery after the Regicide, he chose to hold onto these. Oooh, Oliver. Your high standards slipped here, when you beheld these threaded scenes. Fortunate that they were a biblical theme and you could slip them in under that pretext, eh?

But I learnt all this after I came away. While  was there I spotted a group of women represented on the tapestries: they seemed to be representing desirable attributes. Like prudence, for example.

But their faces: their forms. If ever there were messages within messages within messages, undertones and undercurrents, these women would be the arch-practitioners. They are knowing and dictatorial and anything but submissive. It is interesting that this is the hall where Henry VIII had heads built peeping our of the roof rafters – Eaves Droppers – to intimate to those below that Henry was always watching. there was nowhere to hide. And it seems to me that these figures are in the same vein.

See what you think. Any subliminal Henryesque messages? 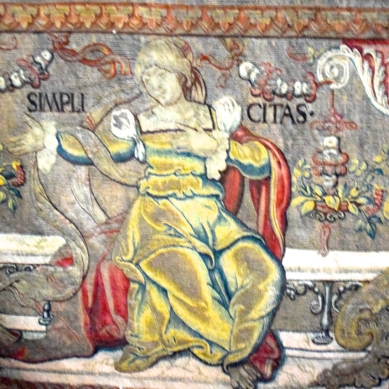 You can learn more about the Great Hall Tapestries here