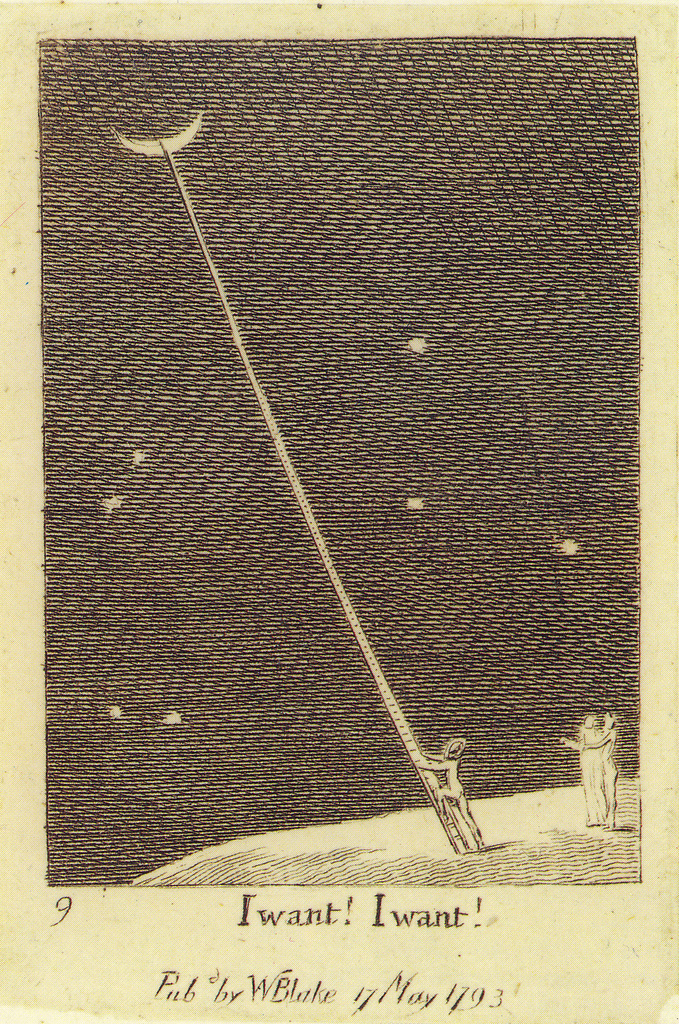 An extra post: A story, too late, but inspired by a prompt which was too good to miss. Write On Edge, the writer’s hub, published a requirement that a piece written should include the words ‘To The Moon”. It brought this unsettling picture by Blake immediately to mind. And a strange encounter.

It was as she padded past the tiny alley on the walk past the river that she decided to explore.

The world happened on these banks. Tourists milled, City workers took the scenic route, Shakespeare buffs eyed the inflated prices necessary to get into the Globe, art lovers swarmed across the bridge from the City to meander round the Tate Modern.

She had long ago eschewed taxi and tube, and these days got her exercise by donning Nikes and power-walking to most of her appointments. She was getting rather efficient and now found herself with 15 minutes to kill before she need push through the glass doors to appraise the latest design brief.

It would give her a chance to explore Cardinals Cap Alley. A narrow whitewashed crevice in the midst of the bustle, it had always appealed. It was quiet. Mindful. But she’d never had time to look before.

She stepped between the narrow whitewashed walls of a place which had once sheltered Winchester Geese; women of the night.

It was not a long alley. She came to a ladder, propped against the wall, and peered upwards. There was a pair of old hobnail boots: workmens’ boots. And a pair of dark trousers which looked incongruously homespun in this day and age.

“Excuse me,” she called to the boots.

A mass of strawy hair shaded the worker’s face. But the tones, when they came, were not unfriendly.

“Can I help?” came the West country burr.

“Yes- well, I just wondered what you were doing up there,” she said. It sounded rather facile, now she had come to ask.

But the man up the ladder did not seem to mind. “Oh, I’ve been helping around here doing odd jobs for a while now,” he said.

“Oh really?” she said, by way of conversation. “How long?”

She froze, hr heart thudding. She began, slowly, to back away, cursing her foolishness in coming down a narrow alley away from the crowds. The sounds of the bustling riverbank murmured over her shoulder: but funnelled by the narrow brick walls, they sounded unearthly.

The man spoke again. And in his voice, inexplicably, was the knowledge of what she was thinking.

Everything in her wanted to put distance between her and this deeply unsettling man.But it seemed she had lost control of her legs.

Nightmarishly, she could not move from the spot. And when she shouted for help, only  an agonised whisper escaped.

She longed with all her being for that 2:30.

“Where…” she whispered through dry lips…”where does the ladder lead?”

“To the moon,” was his answer, delivered dead pan with all the assurance of directions to the local supermarket.”It’s time you and I were getting on, now.”

A  design team sat round the great polished table overlooking the river at 2:40pm. Some tapped toes; others looked impatiently at their watches.

But, unbeknown to them, their client would not be coming.