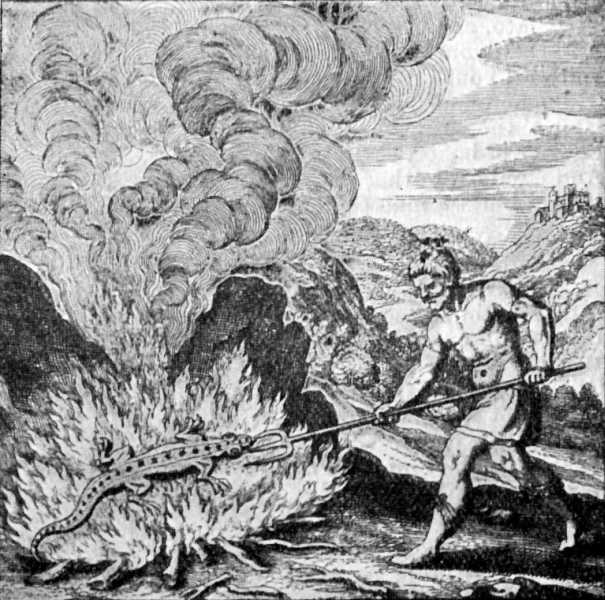 Even the greatest men are prone to a little exaggeration.

All the more so before science had its insistent foot in the door; when the world was full of possibility.

Take Benevnuto Cellini. Not  a man but a superman: born in 1500, a goldsmith, a soldier, a musician, a painter and sculptor and a writer of a flamboyant biography which can get those pages turning even today.

His biography is not just epic; racy, even; but what we might call these days, highly fanciful. Not only, he claimed, had he conjured up demons but on occasions he had a halo of light surrounding his head, he tells us.

And to top it all, Cellini claims to have seen a salamander: not just a modern lizard salamander, but one of the old school ones, the fire-forged variety. And it happened when he was about five years old.

His father was in the basement. That was where the household washing was done: stout oak was used to fuel the fires and the logs were still burning.His father was playing and singing, Cellini recounts, his eyes gazing into the fire all the while, when he saw in the middle of the flames a small lizard-like creature. he says the little thing, far from being consumed by the flames surrounding it, was actually playing in the core of the most intense part of the embers.

And so he did what any good father does: he called his children to watch this marvel of wild life.

“My dear little boy,” his father told him, ” ….. remember that lizard which you see in the fire is a salamander, a creature which has never been seen before by any one of whom we have credible information.”

For the purposes of this exercise I shall be dismissing this as amiable poppycock. Along with those theories brought forth by that Swiss Renaissance man, Paracelsus, which sounded so very credible at the time.There were four elemental beings made up matter, he proclaimed: gnomes had dominion over everything under the earth; undines, water spirits controlled water; sylphs took dominion of the air: and as to fire, it was left to the salamanders.

These days salamanders have an altogether more prosaic brief. But they do still have superpowers.

Yes: their limb regeneration is super-fast. It takes just a matter of weeks to grow a new tail, or foot.

And  finally, after all this time, scientists are watching the salamander carefully. For if nature can help a little salamander do this: might we not do the same for a human being?

And the scientists have found the key to the little salamander’s success is flexibility.

According to a study by researchers at the Max Planck Institute, when something is chopped off, a layer of skin cells covers the wound and then the salamander’s body moves cells to it to create a stump.

But those cells are not specialised. They stop being specialised cells and instead become like a skeleton key: a blank able to specialise in any job it is assigned. From that stump, skin, bone, blood vessels, neurons – every necessary cell can be made to create an entire new functioning limb.

And they do it not by shocking their bodies’ systems with cells which must start from scratch; but cells which are ‘partially reprogrammed’. Perhaps, say scientists at the  Harvard Stem Cell Institute, this approach would be a good way to get our bodies to accept regenerating cells.

Now that’s what I call legendary.

Sometimes, one does not need to exaggerate at all.

31 thoughts on “Out of the fire and into the laboratory…”