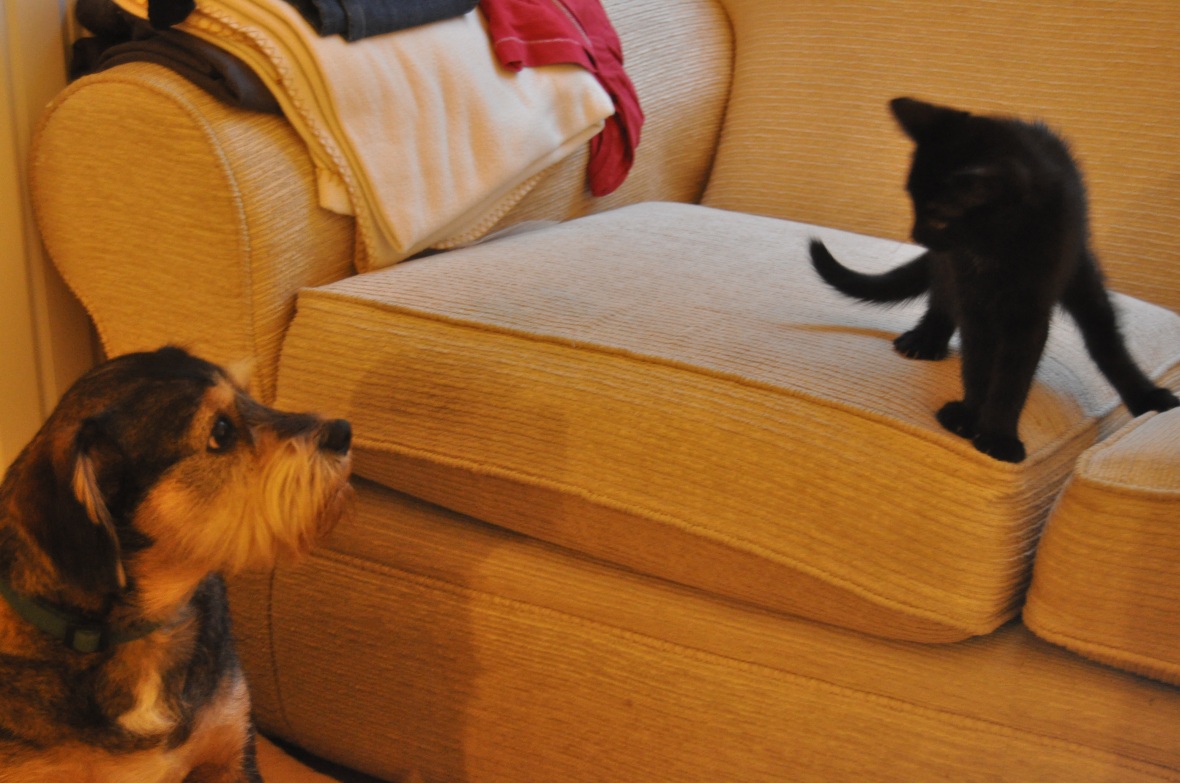 It is always the way when you get home from a really good trip abroad that the dirty washing must be laundered.

Yes: while we at Kate Shrewsday have been languishing in dreamy glass-clad minimalist aestheticism, or gawping at Roman concrete, the characters back at the mansions have been leading a merry old dance.

For when I waved you all off at the airport the dog and the kitten had not even met, and Al was still a pre-school boy.

It has been a hectic week.

The cat has gained in confidence with every passing day. He has even stopped bolting behind the sofa when Macaulay the dog walks in. he has learnt the fine art of Frenetic Under-Duvet Torture.

Being an official Black Tabby, he is the heart of darkness. All light disappears into him, which makes photography a new challenge. I have pictures of people playing with a tiny Black Hole; the dog staring dolefully at about one square foot of black nothingness; and just occasionally, every now and then, two startling Gilliamesque eyes will appear in this tiny expanse of proverbial antimatter.

The dog is reproachful. You bring me this furry entity that stares at me out of the darkness, he emanates, and expect me not to be perplexed? This is my company for the next twenty years, is it? Every time I say hello the black hole punches me. With a paw. With needles in it.

The kitten gets all the good laughs. Macaulay is beginning to feel his moustache is passe´.

We pet him and tell him he’s special, but his nose is out of joint.

The kitten has been invaluable during Al’s first half-days at school.

Who goes to school after lunch? Seriously? We have a fun packed morning and then I turn Al over to the school authorities at 1:15 dressed in a diminutive school uniform and a beam from ear to ear.

On Saturday Al woke up gurgling with laughter. He had played a very good game about monkeys on the computer at school with his best friend Nicholas.

But this week education has been afternoons only, so the kitten has had centre stage during mornings with Auntie Kate.

We were reticent about introducing Al and the kitten. We had vivid recollections of a small boy exuberantly swinging our old cat, Kit Kat, by the armpits in comradely joy.

But he has respected the kitten’s space with something like religious fervour. This has been aided by the art of ‘kitten-fishing’ – a feather on the end of a string on the end of what looks much like a small fishing rod. Al holds it and swipes it round, the kitten goes nuts for the feather.

Bond the kitten has kept Al the schoolboy smiling right up till lunchtime.

However will the kitten amuse himself?

49 thoughts on “Homecoming: doing the washing”