This is a bonus post, or number eight of seven. I had not realized how hard it would be to write about architecture without using pictures; it was so fortunate that MTM’s Seven Architectural Wonders were able to be illustrated by alternating between the blogs of Kate Shrewsday and the Andra Watkins. Since I (MTM) am no longer a paid pedant, I tried to make these as entertaining and enlightening as possible in 600 words or less.
The only ground rule: I could not include a work of architecture that I have not experienced directly and personally, just as one’s list of Great Books should not include a book one hasn’t yet read. 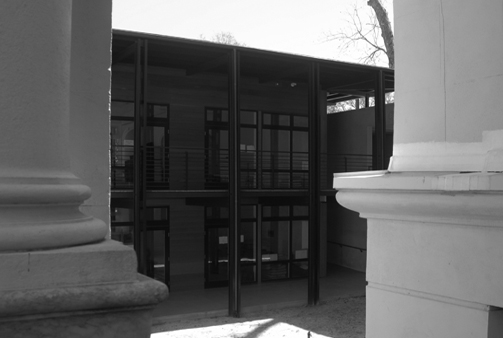 I am truly grateful for all of the comments and interest generated by my week of writing on architecture for The Accidental Cootchie Mama and Kate Shrewsday. It is nice to know that my posts managed to have you thinking and looking at architecture in new ways. Certainly, the limit of Seven made for a steep challenge, and I will be the first to admit that the seven featured works are far from exclusive.

While I have returned the blogging reins to Andra and Kate, here is one last missive to stretch your architectural acumen: or at least to see if you have been paying attention and reading between the lines. In honor of the completion of MTM’s Seven Wonders of Architecture, we have a little contest. With a prize.

Those of you that read along with the week of posts that began on September 5 with The City and Its Tower and concluded yesterday with The Eternal Frame know full well the way the architectural theme was woven throughout. The more astute readers among you may have also recognized two peripheral themes that ran in parallel with the Seven Wonders.

Our contest is to identify the two other themes. Both themes are imbedded in every blog post over the week. The winner will be the first person to correctly identify both of the themes in a comment on both blogs; your comment must appear on both www.andrawatkins.com and  www.kateshrewsday.com to be valid.

The winner will receive an architecturally-themed prize (of course) delivered to their doorstep. Andra is not eligible (she knows the answer) and Kate should sit on her hands and let others try, since she has control over the comment stream on her blog. Either Andra or Kate will be identifying the winner, and I will be personally responsible for getting the winner their prize.

Thank you for reading along. Have at it….

6 thoughts on “Wondering About Wonders”