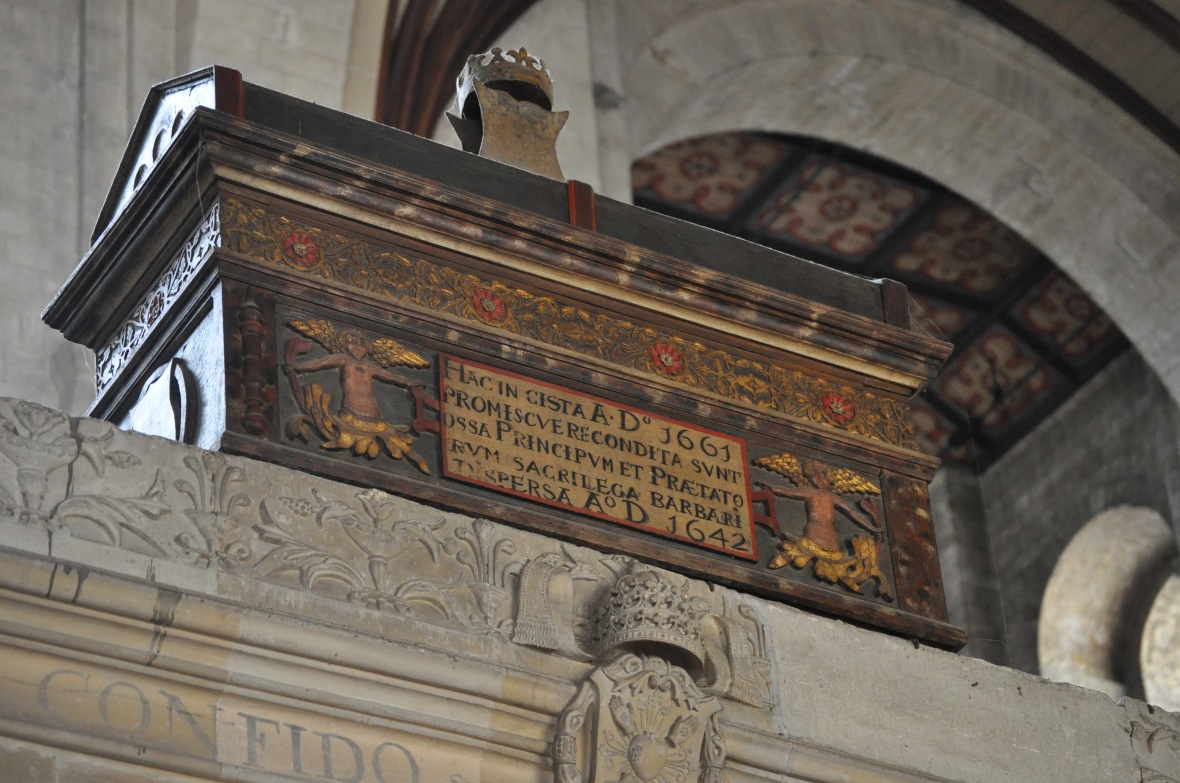 Bones: they’re all the rage now, aren’t they?

We’re all waiting on King Richard III, wondering if he can manage to be the bones beneath the municipal car park in Leicester. Such an unceremonious end. Yet he is not the only king to be bundled up and packed away like a pile of dusty artefacts.

Henry VIII is in a vault below the hallowed Tudor tiles of the Quire at St George’s Chapel, Windsor Castle, and has been for a good long while.

But that wasn’t the way he had planned it.

During his lifetime he had a cast made of himself ready for the most lavish monument. According to the 17th century historian John Speed – who saw Henry’s plans first-hand – it was to have white marble pillars, bronze angels, 134 brass-gilt figures including a life size one of Henry on his horse and two more of himself and Queen Jane.

It should have been most imposing.

But somehow, after Henry’s death, work ground to a halt.

No-one seemed to have enough love for their former King to get the thing completed: and the next thing we hear his effigy is being sold off for cash by the Commonwealth parliament in 1646.

Meanwhile, Henry sleeps in his voluminous vault. He has his wife Jane for company, so that’s nice.

Where shall we put Charles I? the Parliamentarians dithered, after the king’s execution. We don’t want anyone coming to his tomb and making a martyr out of him.

I know, someone said, let’s shove him in with Henry.

And that is just what they did. And when Alfred Young Nutt, that flamboyantly named Surveyor of the Dean and Canons at Windsor, watched the vault opened up in the 19th century to replace a few bits of Charles someone had snaffled as relics, he saw a snug little sight: Henry flanked by Jane on one side, and Charles on the other.

So I was down at Winchester Cathedral nosing around and happened to look up to see some of my favourite sights: the six chests of kings’ and queen’s bones which have sat, for as long as I can remember, on a shelf high above the quire.

There are, to be precise, six kings, two bishops and a queen. In their ranks are King Canute and his Queen Emma; and also that fated redhead, William Rufus, son of William the Conqueror.

But there was one fly in the casket: the bones had become a little scrambled in the thousand-odd years since their storage.

Everyone’s bones were in with everyone else’s, so to speak.

And as I wandered into the quire on Tuesday, I could not help but notice that the caskets were nowhere to be seen.

It is fortunate, then, that three guides were sitting there companionably, waiting to come on-shift. “I wonder,”I enquired, “if you could tell me where I can find King Canute these days?”

I had asked the right question.

“The bones,” a venerable gentleman told me, gleefully, ” are being analysed and examined so that all the bones belonging to each person can be put in the right box.

“Which, when it is completed, will mean Queen Emma will be next to her husband Canute, you see: and not mixed up with seven other men.”

I can quite see how that would be an advantage, I said.

Have the bones been sent away, I said?

No: they had been spirited away to the lady chapel at the back of the cathedral. A marquee had been erected there.

I made the short walk to the chapel. Highly irregularly it was equipped with a security pinpad and a warning that the premises are security-protected. I had not seen any security. They were probably in cassocks. I should have checked for the clergymen in dark glasses with earpieces.

But standing there: the other side of a piece of canvas where the first great royal family of England was being sorted: I felt myself in the grip of Kings Bones mania.