Whilst apart they are a curiosity, together they lead us a merry dance.

They began in 1921, or alternatively, they began just before history.

But let us go with the twentieth century theory at present. Shortly after our Summer solstice, on June 30 of 1921, a businessman, keen amateur photographer and beekeeper was in his automobile, travelling near a village called Blackwardine.

Alfred Watkins loved his archaeology and his antiquities, and so when he espied a Roman fort he felt he must pull over and take a look.

He pulled out his battered old map. And he noticed a pattern which was to absorb him for the rest of his life. He is said to have told his family it was like ‘a chain of fairy lights’: a set of ancient sites- old churches, standing stones, crosses, causeways and hill forts. And to his mind they were arranged in a geometrical straight line.

And where there is one line, Alfred reasoned, why, there must be others.

With more zeal than rigour, he set about identifying a set of lines which criss-cross the British Isles, linking the old places.

His theory, enthusiastically expounded in Early British Trackways – moats, mounds, camps and sites –runs like this: in early times when Britain was almost totally forested and visibility on the ground was much less far-seeing than it is today, early man had straight lines of travel which ran from peak to peak.

But men needed more than the peaks for navigation. And so they sited their important places along the lines. These were made of one of three elements: earth, water or stone.

They even had a name, Watkins effervesced. You could find it if you looked carefully at the litany of British place names: The Ley Farms exist in several places; Wyaston Leys, Tumpy Ley and Red Lay, near Letton, and Redley in the parish of Cusop.

Surely, these were Ley lines?

And while the archaeological and antiquarian worlds snorted in derision, Alfred Watkins continued his crusade for the Ley Line for the remainder of his life.

The theory needed something to season it, though. A little salt and pepper to ginger it up.

Enter John Mitchell, Eton-educated member of the hippy hierarchy, author of The View Over Atlantis and so many other books which re-ignited our passion for the old places. It was Mitchell who resurrected Watkins’ lines and used them to mystify a landscape which had become mundane.

His premises were so engrossing, so seductive, that a whole counter-culture grew green and vigorous around it.

Look at the map: Glastonbury Tor is the focus for a veritable spaghetti junction of lines, a perfect ancient centre for the tie-dye set. 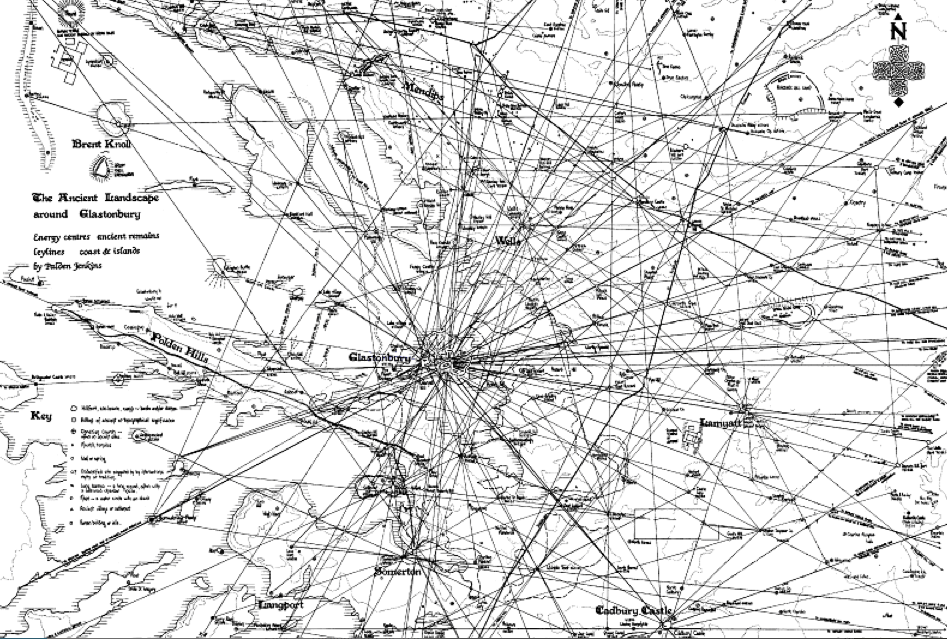 Now, the lines are surrounded by a mist of affable hokum. Ghosts feel more at home at the junction of a Ley Line, happenings happen with more frequency, mystery is commonplace there where the lines meet.

Praeternatural poetry: painted poppycock. But the tales bubble up as if from a sacred Briton spring. Take a look here at some of the Cotswold routes: at the old monk who haunts the line’s beginning at Pershore Abbey, of the child drowned at the old Mill which still walks its boards, the bumps and bangs made by the wraith in breeches and a felt hat at Vine Cottage; of monks disappearing at Winchcombe Hill, and the haunted fairy-infested mound at Bell Knapp.

There are more stories than there are lines.

And despite a sardonic exercise in which telephone box plotting led to a similar grid created by archaeologist Richard Atkinson, we persist in believing the lines have potent psychic energy.

Because, like the litany which opened this post: the idea has too much poetry for us to discount it.