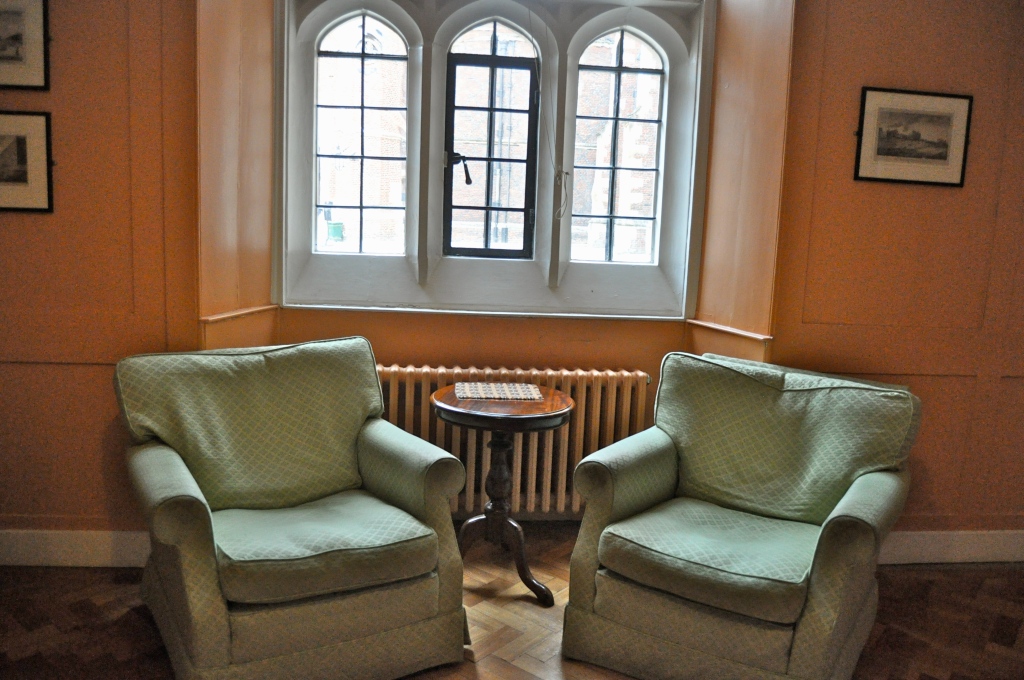 + Inside a Hampton Court grace and favour apartment

Being a lone lady aristocrat in a British palace was not always a bundle of laughs.

Engineers had the temerity not to invent central heating until the 20th century. And so for centuries after the 52 grace and favour apartments were built at Hampton Court Palace, it could be a draughty and inhospitable existence. Even the richest silk and taffeta cannot keep one cosseted against the sharp breezes which drifted off the Thames into the palace halls and corridors.

They had their comforts, and arranged little conveniences, as ladies are wont to do.

Take ‘The Push’. It was an old sedan chair, drawn by a footman using handles, its haunches set upon cartwheels. If you wanted to get from end to end of the palace without the cold gnawing at your drawers you could summon The Push, and travel in comparative comfort from end to end of Hampton Court.

The ladies could engineer other delightful diversions to ease courtly boredom and help them smother their yawns. Especially in Chapel.

Picture the dashing Sir Horace Seymour, a gallant hero distinguished by his conduct in the Battle of Waterloo, sitting in a pew dedicated especially to gentlemen, drawing admiring glances from women young and old.

It was sultry and close, and a lady found herself feeling faint: and eventually, she swooned and collapsed on the pew. Sir Horace rushed over, and lifted her in his great strong arms, and bore her manfully back to his apartments to be cared for by his housekeeper.

And he did it so very well that the next Sunday, what should happen but another lady experience a fit of the vapours and faint clear away?

And the next Sunday, a third lady fainted.

Enough was enough. A friend of the knight went to the Chaplain and slated this new ‘fashion for fainting.’ And so, on the following Sunday, a sign appeared on the chapel door:

“Whereas a tendency to faint is becoming a prevalent infirmity in young ladies frequenting this chapel, notice is hereby given that for the future ladies so affected will no longer be carried out by Sir Horace Seymour, but by Branscome the Dustman.”

As suddenly as it had started, the ‘fashion for fainting’, came to an end.

A lone lady in a grace and favour apartment who wanted to change anything had a battle on her hands; and records exist of many times such a woman took on the Palace authorities.

One of the strangest instances of this came from a lady who lived on the west side of Fountain Court, that grand space of Wren’s with the water of the fountain roaring endlessly, day and night.

The lady in question had begun to receive more visitors than she planned; two more to be precise, of the spectral variety.

She would see two men about her apartment; unsettling for a lady on her own. She was constantly aware that there were men around, and disturbed  by the rapping noises they made. She knew immediately that these were not of this world, and wrote to the Board Of Works, complaining bitterly. They replied back, stating that their jurisdiction did not extend to the afterlife.

In 1871, the foundations of the court were excavated to create a new drainage system. And what should they find, just yards from the lady’s door, but two skeletons under the pavement?

Exasperated, the lady is recorded as saying: “The stupid Board of Works has at last found the two wretched men who, I have been telling everyone, have been haunting me for years.”

And so it must be concluded that a lone lady aristocrat in a British palace has many inconveniences to contend with. But these ladies are tough old birds. And well able to deal with draughts, and discomfort, and bureaucrats.

With thanks to Seila Dunn and Ken Wilson for their absorbing little book, Strange Tales Of Hampton Court, Published by AG Bishop & Sons.(1985)

40 thoughts on “Minor Inconveniences: a glimpse into royal grace and favour living”