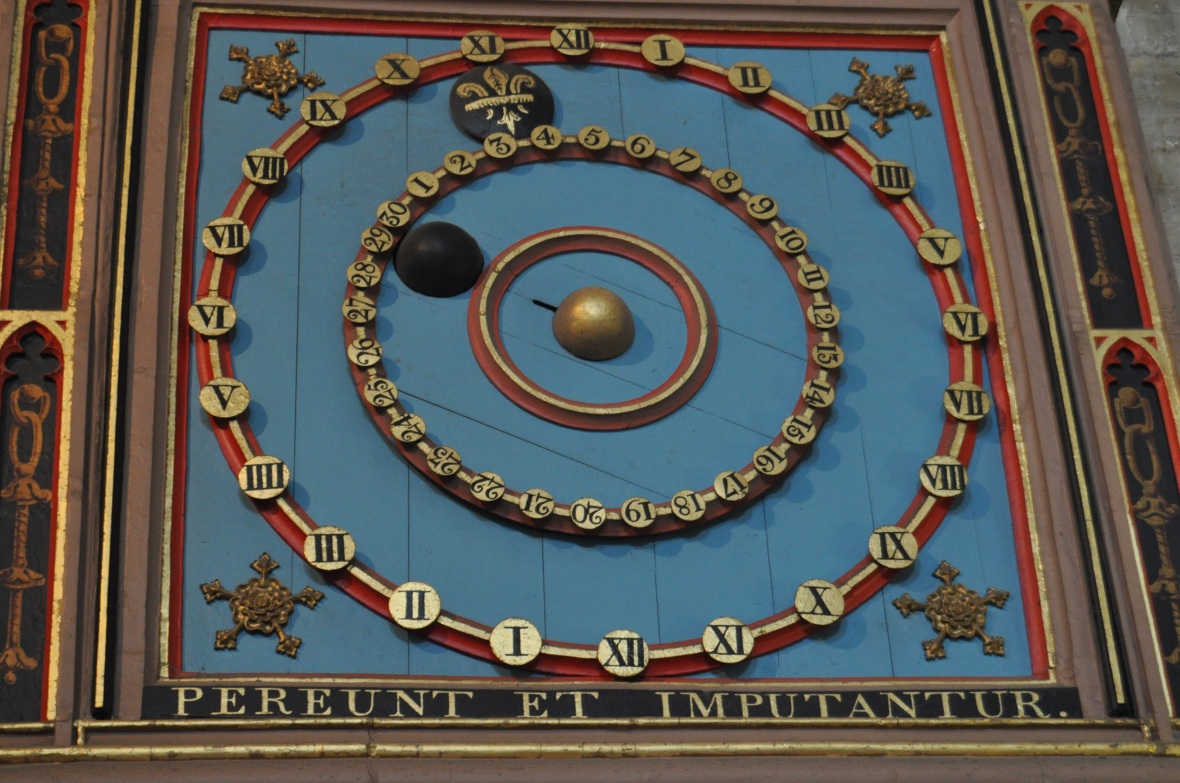 When England was young, its clocks often struck 24 hours.

We know this because of evidence left by an extraordinary little boy was born to a blacksmith in Wallingford, a boy who grew up to be a celebrated mathematician. Richard Of Wallingford it was, who was orphaned and adopted by the Prior of a local monastery; who studied at Oxford for six years; and who created a wondrous clock which, like the Italian clocks of the same itme, was 24 hour. It was thuggishly destroyed, as was so much , by Henry VIII, in the disolution of the monasteries. But a description remains to tantalise us.

He wrote it himself, I believe. Tractatus Horologii Astronomici (1327) describes the clock he made for St Alban’s Priory whilst Richard was Abbott there. An extraordinary feat, it not only passed the hours but chimed them too. It would have had a wheel, with 24 pins, each of which struck an hour.

The early clocks did not need faces: they chimed the hour and monks would stop their work and shuffle off to compline or matins or whatever; and the men in the fields would listen and count the day away.

Whilst Wallingford’s clock was a masterpiece, and would have kept time for the whole town, it is never recorded as having struck 13.

But All Saint’s in Sudbury, Suffolk: now there’s a different story all together.

The timepiece there is a spring chicken compared to Wallingford’s lost clock, a mere 130 years old.  And one day the Vicar brought his family up to the clock tower to admire the surrounding countryside and his eight year old son fell across the striking mechanism.

And after that little encounter, the clock began to strike 13.

This resonated with me. My son gets his hands on mechanical gismos, they are never the same again afterwards.

So the village were stuck with a clock which celebrated midday and midnight with a chime of 13 peals.

Have you ever stood there and counted the chimes? It’s a slow-mo process and the reverberation after the twelfth peal is filled with the same expectancy as that moment in the marriage service when the priest asks if anyone present  knows a reason why the persons before him may not lawfully marry.

Imagine if you were standing there in deafening proximity to one of those great old timekeepers and it struck the thirteenth hour.

John was a soldier at Windsor three hundred or so years ago. Soldiers at Windsor must stay awake, and if they slept the offence was punishable, back around 1700, by death.

And one night John was accused of falling asleep on duty, and condemned to die.

He swore his innocence. And as his evidence he told the court this: that he had heard St Paul’s bells chime 13 in the early hours of the morning of his watch.

Pah, the court said, to a man. The St Paul’s bells are far too far away for you to have heard them (And I must own that the two are 24 miles apart).

But other witnesses came forward from closer to London. And everyone testified that on that night, St Paul’s clock did indeed chime 13.

And so they let John Hatfield off. And he survived to the grand old age of 102, and died at his house in Aldersgate, in the year 1770.

A  man’s life saved: all because a clock struck thirteen.

Written in response to Side View’s weekend theme, Inconsistency. Once again I am late this week: but if you’d like to write on the theme you can find it here.There will be another theme along on Friday to test your little grey cells!

32 thoughts on “When The Clock Strikes Thirteen”